He’s being ‘outed’ for something he said online back when he was 16. AND, in a plot twist of poetic justice, so is an employee of the paper that ‘outed’ him.

In case you were wondering, THIS is exactly why we don’t let the Left skate when we catch them doing something that would kill a career on the other side.

Unless and until the Left lets this soul-sucking Cancel Culture die the horrible death it so richly deserves, Gov Northam will Forever Be the Blackface/KKK guy. Trudeau will be Fake Feminist Blackface.

If even liberal darling Sarah Silverman is telling the world that nobody DARES take a hosting gig like the Emmies in 2019, when malicious ghouls sit down to keyboards with the explicit goal of sifting through social media to find that one damning tweet that will destroy you.

And now, ‘cancel culture’ is turning its sights on a guy who leveraged his proverbial 15 minutes, not to line his own pockets, but to raise a million dollars in donations to a children’s charity.

Just the kind of guy that ‘needs’ to be destroyed, right?

We’ll recount his story before we go into what Cancel culture tried to do to good-hearted 24-year-old Carson King. The guy whose life was changed once, and possibly twice — first by a fan sign that went viral, and second by a reporter that had to dish dirt on what he said online while still a kid. 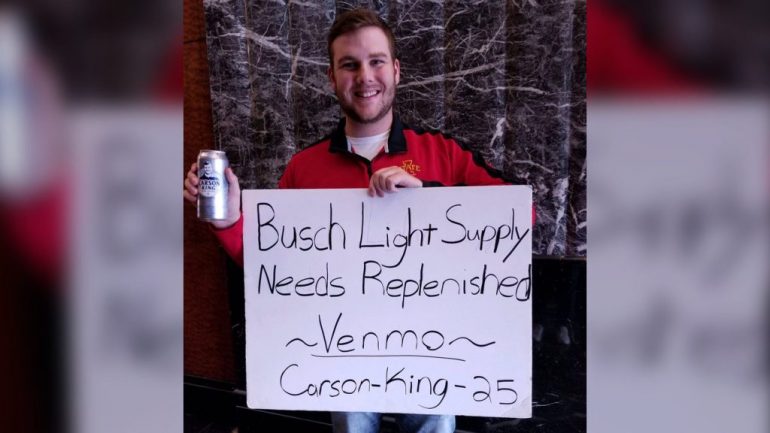 Before September’s annual Cy-Hawk football game, King was unknown to the world, working security at Prairie Meadows Casino and trying to figure out what to do with his life.

But after he held up a sign asking for beer money that appeared by chance on ESPN’s “College GameDay” show before the game, he’s been lauded as an example of kindness and compassion across the nation. The sign brought in more than $1 million after he decided to donate all of the funds raised from his brief television appearance to the University of Iowa’s Stead Children’s Hospital.

It began as a whim. The night before the game, King made a sign with a Sharpie and scrap of poster board, taking only a few moments to do it, that read “Busch Light Supply Needs Replenished” and requested $25 via the digital payments service Venmo. He arrived on the “GameDay” set the next morning at 5:30 a.m., but the area was already so crowded he was forced to move into a secondary area.
Source: ACCentral

His feel-good story quickly went viral and found it’s way into the national spotlight. He quickly became a local legend and got his face printed on a beer can, as well as a year’s supply of beer. 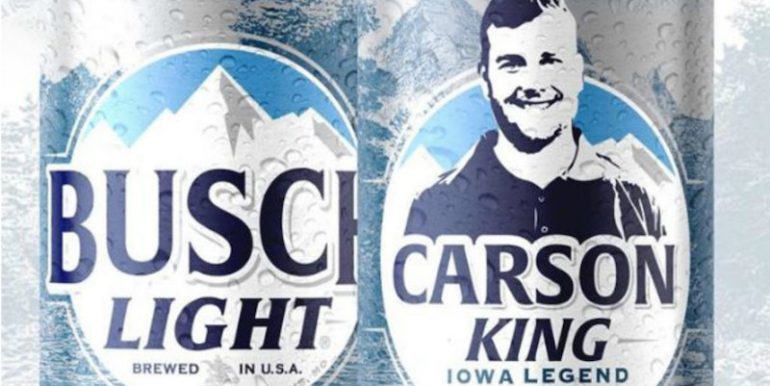 In the process of telling this story, a ‘routine check’ of social media turned up exactly two racially-charged jokes from seven years ago when he was only 16.

‘It was only a routine check into the background’.

TWO freaking off-color jokes by a sixteen-year-old kid. It’s a good thing there was no Social Media back in the 20th Century, eh?

Otherwise, they may have heard how people a generation before them once told (and might have even laughed at) off-color jokes about ‘little people’, gruesome jokes about dead babies and garbage cans, jokes about physical and or mental disabilities — particularly Helen Keller, and all SORTS of jokes based on all the worst kinds of sexual stereotypes. But because those jokes vanished in the telling, they cannot be used against those people.

But for some reason, those two tweets were deemed necessary to be included in the story. There was a press release, explaining their reasons.

As a result, this decent guy had to do a public and preemptive mea culpa:

Will it hurt his future employability? Who knows?

The people who ‘out’ such ‘offenders’ never stop to ask about the consequences to an ordinary blue-collar schlub trying to make his way in the world. Generally, they are secure in the belief that nobody is going to ‘out’ them in the same way, so why should they care?

He made a viral @CollegeGameDay sign asking for beer money & decided to donate it (over $1 million!) to a children’s hospital. So @DMRegister & @aaronpcalvin dug up tweets from when he was 16, @BuschBeer cowardly abandons him, & kids at @UIchildrens suffer as a result. Well done. https://t.co/MPA5VILP77

Anyway I hope the hit job was worth it, @aaronpcalvin! pic.twitter.com/1IbnoQyg03

This is exactly what Chappelle was slapping back at when he did the impersonation in his Netflix special.

CLASH POLL: Two Views On ‘Cancel Culture’ In The Wake Of #BlackfaceTrudeau — Which One Do YOU Agree With?

WATCH: Dave Chappelle’s Netflix Special Exposes The LIE Of ‘My Body, My Choice’