***CORRECTION: An earlier version of this article incorrectly identified Scott Adams as an “ex-Bernie Bro.” Mr. Adams says that this characterization is incorrect.

They call me an ex Bernie Bro. Um, no.

ClashDaily apologizes for the error.***

Anyone who knows the latent biases of Silicon Valley will not be remotely surprised.

Adams considers himself “left of Bernie Sanders but with a preference for plans that can work.” He has also said that on social issues “I lean Libertarian, minus the crazy stuff.”

He seems to like Trump, in part because he’s NOT a traditional politician with the usual talking points. That’s clear in his analysis of Trump’s ability in the art of persuasion.

The Dilbert Creator has written a book, Win Bigly: Persuasion in a World Where Facts Don’t Matter. He’s been active on social media, and has earned himself quite a following from across the political spectrum.

One of his more popular blog posts was when he did a detailed breakdown on why the Media(D) (and other Democrat propagandists) were lying when they perpetuate the ‘very fine people’ accusation against Trump from Charlottesville.

Is it a coincidence that only the #finepeoplehoax post on my blog is now invisible to the public? That’s a big fucking coincidence. https://t.co/zxCb2ithDf

Which do you think was the one affected? Of course… it was the post breaking down exactly why Trump ISN’T the racist monster the Left is working so hard to convince us he is.

When you click the link that would take you to that article, what do you get? You get this warning message: 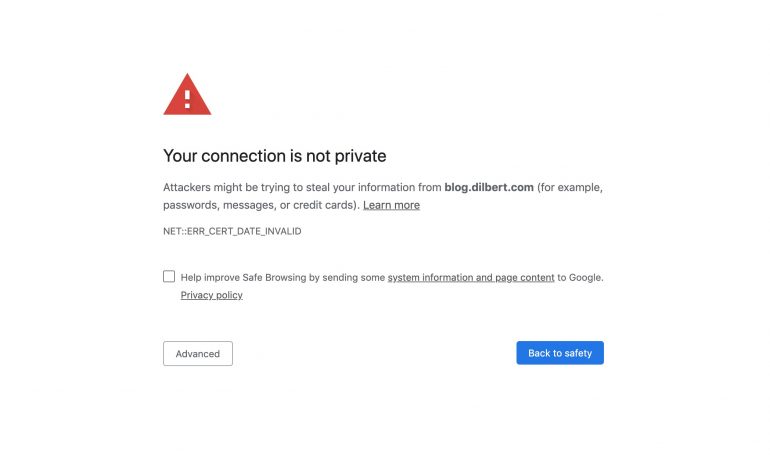 And when you click ‘learn more’, it gives this ‘helpful’ message.

This server could not prove that it is blog.dilbert.com; its security certificate expired 5 days ago. This may be caused by a misconfiguration or an attacker intercepting your connection. Your computer’s clock is currently set to Tuesday, September 10, 2019. Does that look right? If not, you should correct your system’s clock and then refresh this page.

But the one page that gets flagged with the ‘unsafe’ scare page just ‘happens’ to be the one that debunks the Left’s favorite lie.

They are openly supporting the Left.

They openly oppose the right.

And they have even openly written about forcing their politics down our throats.

Why should any of this be at all surprising?