I’m sorry, maybe I missed the revolution that ceded our government of the people, by the people and for the people to the yoke of some woefully corrupt, thoroughly unaccountable supra-national organization.

On what POSSIBLE basis does she presume to weigh in on our sovereignty?

America has established specific provisions and rules for both entry and for asylum. Those provisions are being exploited by precisely the same sort of corrupt and unaccountable NGOs that count themselves fellow-travelers with the socialist technocrats that populate the UN, and the criminal cartels that stand to profit handsomely from the travel.

America can and will do as we must to keep those provisions from being exploited by those trying to game the system, and endangering innocents — particularly children — in the dangerous journey across the illegal crossing points.

The kicker? The person telling us this is, herself, an American.

“It is never a crime to seek asylum in another country even if one enters a country irregularly,” said Melissa Flemming, the Head of United Nations Communications.

Fleming continued to say in her Facebook post that “the right to seek asylum is enshrined in Article 14 of the Universal Declaration of Human Rights & was made binding by the 1951 Refugee Convention.”
Source: SaraACarter 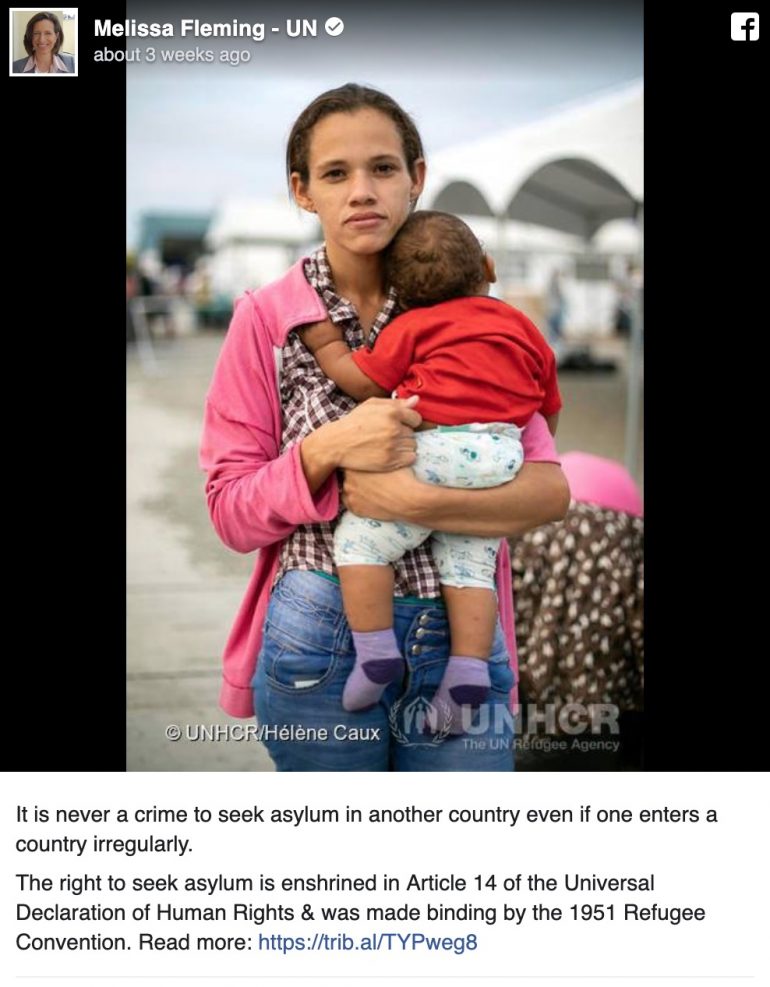 ‘Seeking asylum’ itself isn’t the problem. There are many legal ways for a person to ‘seek asylum, including applying from beyond the American borders.

But we have ZERO moral obligation to facilitate the funding of criminal cartels, the exploitation and endangerment of (especially) women and children, and risking life and limb against the natural hazards present along that border in your effort to avoid lawful entry points.

The ‘moral argument’ she tries to bludgen us with collapses under the weight of the IMMORALITY associated with the criminal breach of a sovereign national border that she is encouraging.

Which reminds us… we’re still paying for the UN to exist, aren’t we?

What vestigial functions does this corrupt group still perform that we should even care if it should continue to exist?

Their peacekeepers have participated in the sexual exploitation of minors. Their highest executives have been caught up in career-ending scandals.

The UN’s investigation into the abuse of the Iraqi oil-for-food program officially ended in October 2005, but it continues to reverberate within UN headquarters and in an increasing number of capitals. The inquiry was triggered by a report in the Iraqi newspaper al-Mada in January 2004 listing 270 persons and entities that received oil vouchers in exchange for helping Saddam Hussein. Some of those individuals, including prominent politicians, have resigned from their positions, face prosecution, or are the subject of domestic investigations. The independent investigation, headed by former U.S. Federal Reserve Chairman Paul Volcker, pointed to deep flaws in UN oversight of the program, which has helped spur a push for management reforms at the organization. The scandal reached the very top of the UN and tarnished the reputation of the secretary-general in some key member states. The Volcker inquiry extended to thousands of private firms found complicit in paying bribes to the Iraqi regime and receiving kickbacks to participate in the program. The scandal could have repercussions for future UN sanctions programs.
Source: CFR

Hillel Neuer from UN Watch reminds us of how corrupt the UN is with his pinned tweet:

And how it is prevented from acting upon even its stated purposes:

UN Watch is alarmed at China’s growing influence at the UN. Recently, 50 UN member states signed a letter praising China for its human rights record and backing its policies in Xinjiang, where 1 million Uighur Muslims are being detained in camps.https://t.co/L13AZ8ndSt

Isn’t it time we take back the primo land in New York they’ve been occupying and let the world’s dirtiest dictators do their parting somewhere else?

Is it finally time we kicked the UN to the curb?

Is the UN past saving?