Here’s a shocker — someone on Late Night television remembered that comedy can mock both sides of the aisle. How long before he’s canceled?

That’s how this works, right?

If you dare say anything negative about the woke left, you’re done for. And who is more woke than Prime Minister Wokescold himself, Justin Trudeau?

Neither of the Jimmys — Fallon and Kimmel — touched the controversy it in their monologues. (But then, I didn’t watch the shows in their entirety.)

This is probably because they both wore blackface themselves. It would seem just as hypocritical to condemn Trudeau for being guilty of the same thing that they had done, right?

Colbert’s only joke during his monologue was that he was glad it wasn’t the United States this time. It was a whole 30 seconds of non-humor.

Noah, on the other hand, spent a solid 6 1/2 minutes lambasting the progressive “übermensch” whose affinity for cosplaying culture over three decades (80s, 90s, 2000s) has suddenly bitten him in the hindquarters.

Justin Trudeau loves him some costumes and sees himself as the woke savior of the world.

Here he is dressed up in the halls of Parliament on Halloween in 2017. Even he thinks that stripping down to his Superman Underoos shows that he is the “übermensch” who will defend feminism (despite having groped a female reporter) and “racialized” Canadians (while culturally appropriating them). 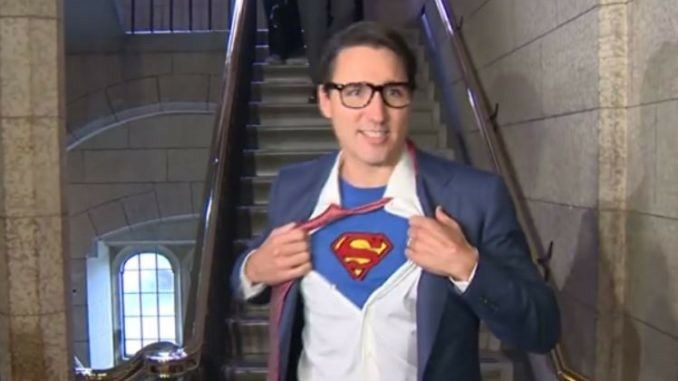 He’s known for his affinity for Indian culture as Prime Minister. Look! He knows Bhangra!

Back in his pre-Parliament days, however, his cultural appreciation took a more colorful hue.

Brown and black to be precise.

No wonder Noah wanted to mock this! The Trudeau blackface story is trending worldwide and it is a comedian’s dream.

Let’s be honest, it’s absolutely hilarious! Especially since it’s less than a week into Trudeau’s reelection campaign. (The Canadian federal election is on October 21.)

Noah began by saying that the blackface and brownface pics were the worst examples of #ThrowbackThursday ever.

He then mocked Trudeau for getting the color wrong.

Trudeau deserves all of the mockery that he gets.

The main tactic for his reelection campaign so far has been to paint the Conservatives as racist. He is mired in scandal, having violated several ethics rules that he put in place, and it appears that he attempted to pressure his Attorney General to obstruct justice to save a few jobs in Quebec.

The proud feminist Prime Minister threw said Attorney General, an indigenous woman, under the Liberal bus, by gagging her during Parliamentary hearings on the matter and kicking her out of cabinet along with her female friend that defended her.

Trudeau has imposed a national carbon tax violating the rights of provinces and their electorate’s wishes.

He pushed legislation to make “misgendering” someone illegal and codified the nebulous term “Islamophobia” as bigotry punishable by law.

Again, he deserves this.

It’s just too bad that it’s only Trevor Noah that’s doing it.

Then again, it’s probably because Noah hasn’t been caught in blackface.