The feminist Jewish comedian is suddenly an expert on Messianic Christology. Who knew?

Silverman tweeted, “You all think you will recognize Jesus when he comes back? He is this girl. And y’all don’t even see it.”

You think you will recognize Jesus when he comes back? He is this girl. And y’all don’t even see it. https://t.co/TAB5YafOQ0

Of course, this is the same woman who thought that utility markers were swastikas. 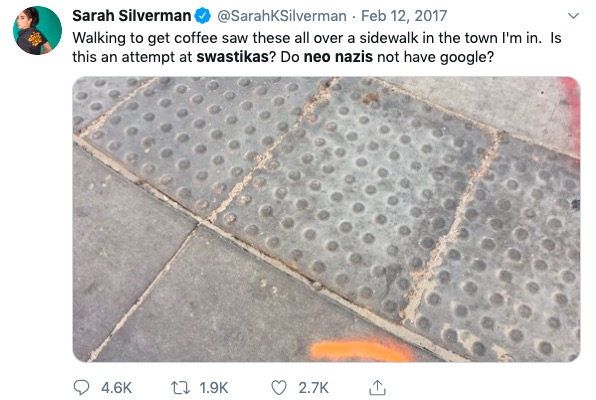 And that Hillary Clinton should get “1,000 Purple Hearts” for killing Osama Bin Laden.

So, we’re not actually dealing with a genius here.

And, well, Silverman has used Jesus in the past in a snide, mocking, and, frankly, blasphemous way. Her 2005 comedy special called Jesus Is Magic mocked religion — Christianity in particular and Jesus specifically — along with many, many other topics.

She has used Jesus in a skit to push abortion in a ridiculously offensive manner.

Silverman doesn’t stop with ratcheting up the contempt, though.

Even Christmas Day isn’t off-limits to her provocative comedy aimed at Christians.

How Silverman has been able to recognize Thunberg as the Second Coming of Christ without having acknowledged the First Advent is actually quite interesting. Particularly since she doesn’t have much regard for Jesus in the first place.

And we know how you feel about Jesus. pic.twitter.com/W0CPHM6mtX

Her comparison to Jesus doesn’t work, either.

Jesus had a message of reconciliation with God and peace once that rift had been repaired.

The Lord spoke of peace, joy, and denounced the religious leaders of His day as hypocrites.

He said, “Let not your heart be troubled, believe in God believe also in Me.”

Greta Thunberg, the autistic teen who slipped into a severe depression at age 11 due to her concern for the environment and stopped going to school, suffers from “selective mutism,” and who claims that she can “see carbon dioxide,” wants people to panic. Incidentally, her panic, which was stoked by her activist parents from an early age, led to an unspecified eating disorder so severe that her mother said that they were “counting the gnocchi balls on her plate” to make sure that she was eating enough and it would take her “up to an hour to eat a third of a banana.”

Not only does she want people to “feel the same panic” that she does, but she also wants world leaders to act in any way possible to fight climate change — including tossing aside capitalism.

That's why they use a brainwashed kid telling us

That’s not exactly the same as, “And which of you by being anxious can add a single hour to his span of life?”

She’s not the Second Coming.

But those on the left certainly think that she is.

Thunberg has been nominated for a Nobel Peace Prize for stoking fear in children and encouraging them to skip school.

Part of the left’s fascination with Thunberg could be because she made the super-woke decision to not meet with President Trump and instead have her teenage climate angst stoked and fawned over by Trevor Noah.

“What we should do as individuals is to use the power of democracy to make our voices heard and to make sure that the people in power cannot continue to ignore this.” – Climate activist @GretaThunberg pic.twitter.com/4feLq7QhWU

Of course, that scheduling decision could’ve been because her appearance on the show was a decision made by her PR firm and an understanding that #Resist! was a winning message for the teen activist concerned that the Earth will be forever destroyed if we don’t act within the… what is the timeline now… 8 years?

Oh, you didn’t know that she had a PR firm? Indeed she does. A Swedish reporter has done some digging and exposed the coordinated effort to make Greta the face of the climate change movement.

There are some big bucks behind her activism as well.

But any criticism of the teen with Asperger’s is treated as hateful.

The left can literally treat her as though she is the Second Coming of Christ, however.

Don’t condemn them for it, or you’ll out yourself as a misogynist bigot who hates special needs kids who claim that they can see an invisible gas.