Can you believe it? Another right-wing extremist celebrating the violence against their political opponent — oh, wait. Nevermind.

Midler was apparently so upset that the senator was criticizing the Kurds after U.S. troops pulled out of Syria, that she decided to suspend her policy of not condoning violence in order to cheer on the neighbor that attacked Senator Paul.

On November 3, 2017, Rene A. Boucher of Bowling Green, Kentucky, tackled Senator Rand Paul while he was mowing his lawn and wearing headphones at the time. The attack resulted in Sen. Paul suffering from five broken ribs, three of which were displaced fractures, and precipitated a case of pneumonia. It kept Sen. Paul out of Washington for nearly two weeks. Boucher was sentenced to 30 days in prison, one year of probation, and a $10,000 fine after pleading guilty for felony assault.

Nevertheless, despite not promoting violence, Rand Paul’s statement about the Kurds was just so outrageous that Bette Midler decided to tweet that we should all be grateful that Boucher broke his ribs and damaged his lung.

She wrote, ” I DO NOT promote violence but… Rand Paul says the Kurds are being “ingrates” for taking their frustrations out on US troops. Which is a good reminder for us all to be more grateful for the neighbor who beat the shit out of Rand Paul.” 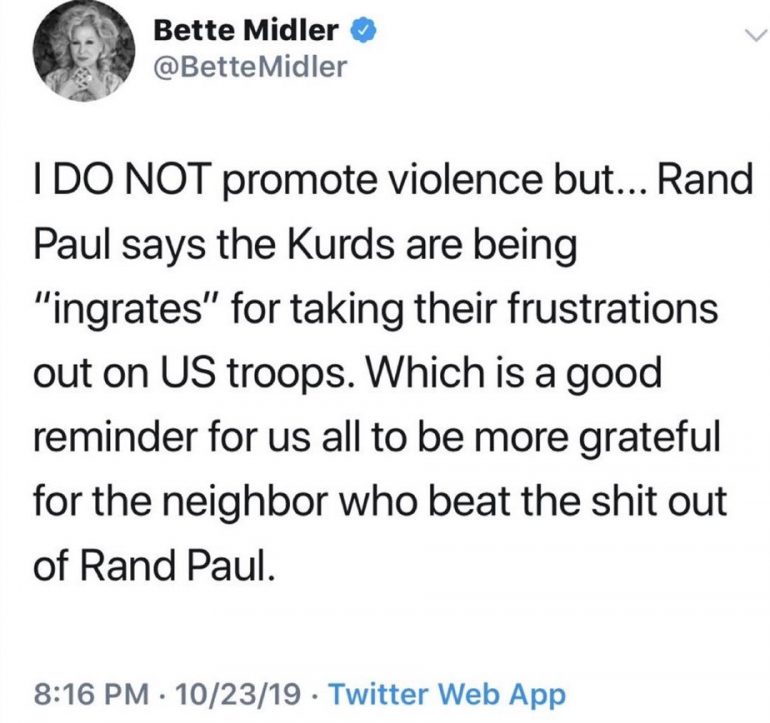 This isn’t the first time that she’s suggested that violence against the Kentucky senator is A-Okay. Back in February, she was so upset about the partial government shut-down that she tweeted.

Senator Paul was feeling the effects of the attack as recently as this past August. He tweeted that he had to have surgery due to the damage to his lung after the November 2017 assault.

Unfortunately, I will have to limit my August activities. Part of my lung damaged by the 2017 assault had to be removed by surgery this weekend. The doctors, nurses, & staff at Vanderbilt University Medical Center were great. I should be able to return to the Senate in September

It seems a bit cruel to constantly refer back to that horrible incident.

Bette should really calm down.

Like many on the left, she’s very concerned about the language that is used by the President and others in positions of power…

"Language is the seed of violence. We need to listen carefully to what is said, to read between the lines, no matter which country we live in, no matter who the current tyrant might be."

…just not her own words.

Clearly, Midler is not a fan of Rand Paul.

After her vicious tweets, the feeling must be mutual.

If it isn’t, then Rand Paul is truly a great man.

[EDITOR’S NOTE: It would appear that Midler has deleted her recent tweet. Fortunately, the internet is forever and a screenshot has been posted instead of a live link to the tweet.]

Thus Far in 2021, Big Tech Has Cracked Down on Free Speech More than Ever Before
April 22nd, 2021 Flag And Cross

If We Can Prosecute Chauvin For 1 Murder, Let’s Go After Bush, Obama, Trump & Biden For Thousands
April 22nd, 2021 Sons of Liberty Media