Really, New York? Words are punishable but an increase in violence against a specific group can be ignored?

The city of New York’s Commission on Human Rights has announced that there will be “legal enforcement” against discriminatory behavior which now includes, “derogatory use of the term ‘illegal alien'” as well as “threatening to call ICE” and “discrimination based on limited English proficiency.”

The move has been one pushed by the open-borders leftists for some time. They are trying to reframe the debate around illegal immigration by insisting that “no one is illegal” and change the language from “illegal alien” to “undocumented immigrant.” They don’t seem to comprehend that violating immigration law for any reason is an illegal act.

It is now criminal in New York to “threaten” to enforce federal immigration law and violators could face fines of up to $250,000.

“Threatening to call ICE when motivated by discrimination, derogatory use of the term ‘illegal alien,’ and discrimination based on limited English proficiency are unlawful discriminatory treatment under the NYC Human Rights Law,” the announcement read.

“Fines of up to $250,000 can be assessed for each act of willful discrimination, and damages are available to complainants,” the city said.

BREAKING:
New York City has made it illegal to threaten to call ICE based on a discriminatory motive or to tell someone "go back to your country." Hate has no place here. pic.twitter.com/8PaIozjQty 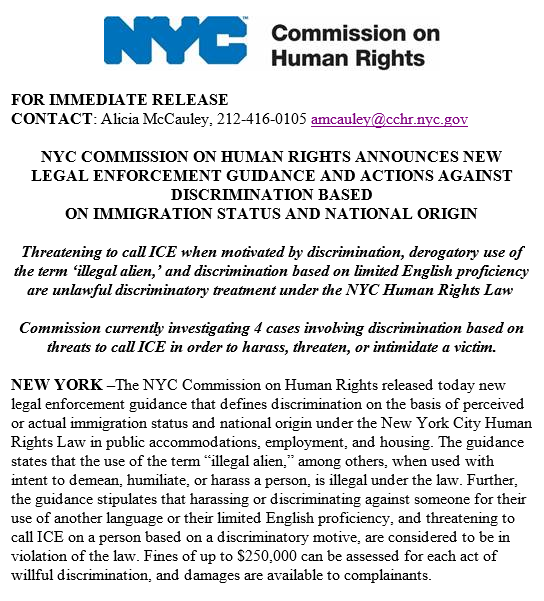 But as Sen. Ted Cruz, R-Texas, pointed out, “illegal alien” is the term used under federal law. Former Attorney General Jeff Sessions specifically directed his Justice Department not to use terms other than “illegal alien,” which he said was based in U.S. code.

“The word ‘undocumented’ is not based in US code and should not be used to describe someone’s illegal presence in the country,” he reportedly said in an agency-wide email.

While all of this anti-discrimination talk around illegals is going on, New York has had a significant increase in anti-Semitic hate crimes against Orthodox Jews.

There has been a spike in violent attacks on those who are “visibly” Jewish in Crown Heights, Borough Park, and Williamsburg.

In one instance, a 64-year old rabbi was hit in the mouth with a large paving stone that knocked out some of his teeth and broke his nose as he was walking in a park in Crown Heights.

Crown Heights is the location of the riot fueled by race-baiter Al Sharpton in the 1990s and revealed him to be a horrible, horrible excuse for a human being by inciting the mob in the wake of a tragic car accident.

Mayor Bill de Blasio has been criticized for not taking any real action to address the problem. Instead, he has repeatedly stated that the spike in anti-Semitic crimes is due to the rise of white supremacy and… of course, President Trump. Unfortunately, the data doesn’t seem to support that.

Armin Rosen wrote in Tablet, “De Blasio has also repeatedly insisted that the attacks against Jews in New York are driven by a white supremacist movement connected to Donald Trump despite clear evidence that this is not the case and, in fact, many of the attacks are being carried out by people of color with no ties to the politics of white supremacy.” Between 2017 and 2018, there were 37 blacks and 46 whites who were arrested for anti-Semitic hate crimes.

There is scant evidence that the de Blasio administration or local politicians have made stopping physical attacks on Jews in New York City a priority. After Menachem Moskowitz’s beating, the first call after the end of Shabbat came from Barry Sugar, who Moskowitz says was the only one who offered guidance as to how to push for a hate crimes prosecution. “Not one politician came to me to find out what happened or comforted me,” says Moskowitz. “I didn’t get a call from anybody.”

“You need to tackle these issues head on and be proactive,” City Councilman Chaim Deutsch said of de Blasio’s response to the spike. “He has not shown leadership when it comes to tackling hate crimes.”

In mid-September, Bari Weiss, an op-ed columnist for The New York Times, was interviewed by NPR on the rise in anti-Semitic attacks. NPR host Scott Simon started the interview by making it clear that this was a growing problem.

SCOTT SIMON, HOST: Anti-Semitic hate crimes in New York City are up 63% compared to 2018, according to the city’s police department. Many are acts of vandalism, like swastikas scrawled on synagogues. But there seems to be a specific increase in violent crimes against Orthodox Jews in neighborhoods where they live, including Williamsburg and Crown Heights.

Weiss, whose book, “How To Fight Anti-Semitism” was just released, says that it is curious that there

SIMON: First, these current attacks. Based on reporting, is there a particular source for attacks against Orthodox Jews?

WEISS: Well, it seems to be happening often from people who live in the neighborhood. We don’t know that much about the perpetrators. What we do know is that people that live in Crown Heights don’t tend to be white supremacists. And to judge from the footage of many of these attacks, at least some of the perpetrators seem to be young black men or teenagers. And perhaps that’s one of the reasons that so many people want to avert their eyes from what’s happening in places like Crown Heights.

SIMON: Are they street assaults and robberies or hate crimes? Where are the lines in something like this?

WEISS: Well, all we know is that the people that are being attacked are the most publicly, visibly Jewish people. And they’re incredibly violent. Given that this has been happening in the city, there’s been a sort of curious lack of interest on the part of New Yorkers, on the part of the mayor, on the part of the governor. Imagine if a spate of crimes had happened in a pattern like this against another minority – what the reaction would be.

It seems that anti-Semitism in certain parts of New York are not worth looking into because the perpetrators aren’t the white supremacists that Mayor de Blasio claims that they are, but using legally accurate language now deemed “hate speech” is punishable with a quarter-million-dollar fine.

No wonder de Blasio couldn’t get over 1% in the primaries — he’s so awful even New Yorker Democrats (who don’t seem so picky) don’t like him.