Like most Democrats, Rashida is a sucker for stories featuring a victim — in particular a fake one.

That alone would go a long way to explaining the Squad’s unwavering support of the BDS movement, and certain sketchy activist groups.

When news came out about a young black girl having her dredlocks forcibly cut off by three white classmates, Rashida rushed in to make this pronouncement:

You are beautiful, Amari Allen. You are courageous & strong. You are loved.

You see, Amari, you may not feel it now, but you have a power that threatens their core. I can't wait to watch you use it and thrive.

You are beautiful, Amari Allen. You are courageous & strong. You are loved.

You see, Amari, you may not feel it now, but you have a power that threatens their core. I can’t wait to watch you use it and thrive.

Those young white boys, you see, are evil and racist… according to Rashida Tlaib.

It isn’t surprising that she’s retweeting someone with an obvious loathing for a Christian school, and — let’s use generous language — is preoccupied with the issue of race. 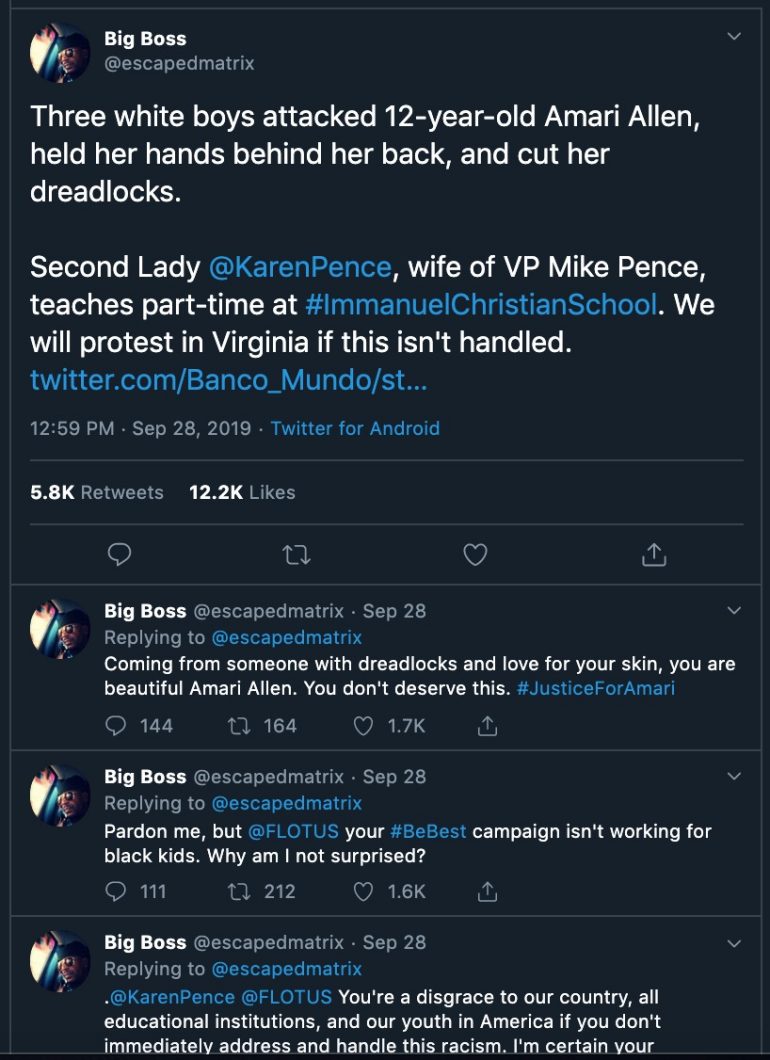 But wait… all is not what it first seemed.

A 12-year-old girl who accused three sixth-grade boys of pinning her down and cutting her dreadlocks has admitted to school officials she was not attacked and cut her own hair, her family’s attorney and the school said.

[Name Omitted], a sixth-grader at Immanuel Christian School in Springfield, Virginia, said three white classmates ambushed her on the playground last week and used scissors to cut off some of her dreadlocks while telling her her hair was “nappy” and “ugly.”

She and her family met with school officials Monday morning to apologize.

The girl maintains she has been the victim of bullying, Daniels said. The family is seeking counseling for the girl.
Source: NBCWashington

The evidence showed the story was made up.

“To those young boys and their parents, we sincerely apologize for the pain and anxiety these allegations have caused,” the family said in a statement. “To the administrators and families of Immanuel Christian School, we are sorry for the damage this incident has done to trust within the school family and the undue scorn it has brought to the school.”

During the investigation of the girl’s accusations, security camera video showed where people were at the time of the alleged attack, the family’s attorney said, and it became clear the girl’s account could not be true based on the day and time she said it happened.
Source: NBCWashington

Will the Elected Democrat who was so very quick to rush to the defense of a young girl who was ‘wronged’ at the hands of three white boys be as quick to restore the honor of those wrongly-accused white boys? Or does their innocence not matter, here?

Is it OK for Verified Accounts on Twitter to attack teenage kids so long as their gender and race put them on the ‘approved victim’ list?

Rashida, do you intend to send a note to the boys involved and share your feelings about them being falsely accused in this hoax?