This story may prove to be even more salacious than Rep. Ilhan Omar’s marital drama!

Conservative site, Red State broke the “throuple” story several days ago noting that freshman Congresswoman Katie Hill(D-CA) had been involved in a consensual long-term, committed polyamorous relationship which included her husband and a female campaign staffer, but (shocker) it didn’t last. The 32-year-old Hill, who had come out as openly bisexual after high school, is divorcing her husband, Kenny Heslep. As the divorce proceeds, details of the “throuple” relationship are being released and the consensual nature — with a particular view regarding the power imbalance between Hill and the staffer — is being questioned.

Here is Katie Hill with her campaign staff: 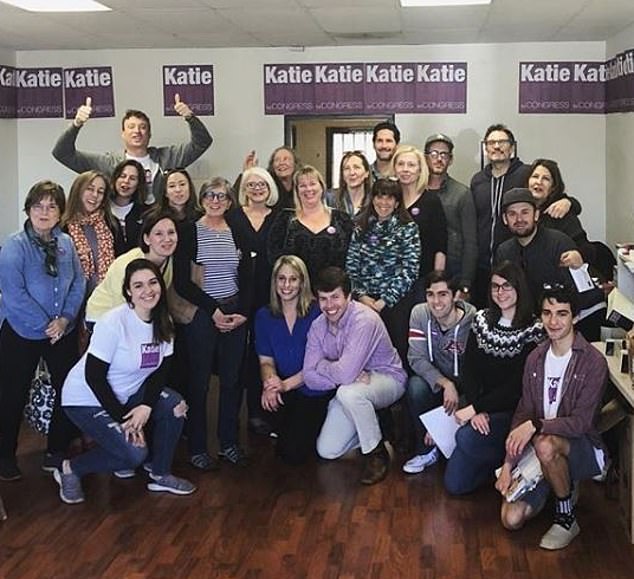 Heslep and the staffer, according to text messages provided to RedState, believed the polyamorous arrangement to be a long-term, committed relationship. The trio took multiple vacations together, including to Alaska…

…According to a source close to the staffer, the throuple agreed to continue their committed relationship when Hill moved to Washington, D.C. on January 2019, but that Heslep and the staffer quickly noticed a difference in Hill’s demeanor. By late May, Hill broke off her relationships with both Heslep and the staffer, claiming she wanted to focus on “this important work” and that it wasn’t fair to be involved in a relationship. The staffer, as these text messages show, was distraught and trying to figure out how to move on with her life.

Screenshots of the conversation between Hill and the staffer when the relationship ended are below. (Hill’s comments are in the grey speech bubbles, her staffer’s texts are in blue.) 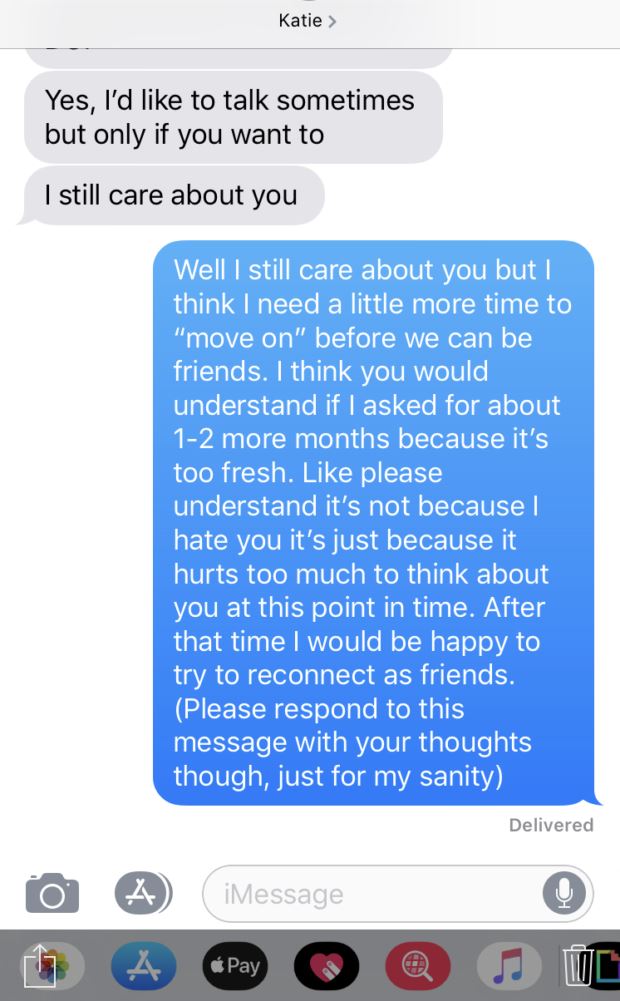 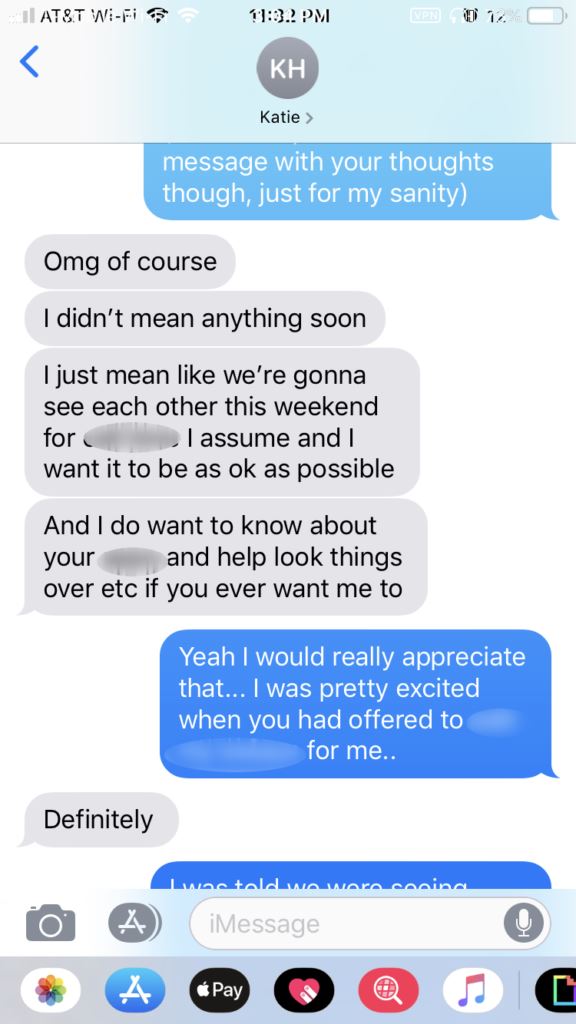 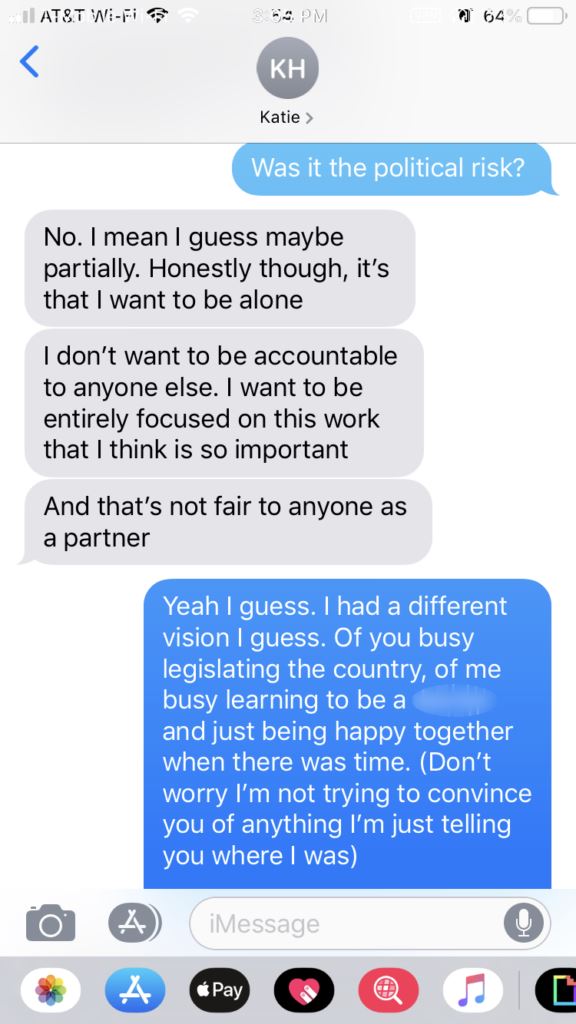 Heslep also alleges that Hill was having an affair with her then-finance director, now Legislative Director, Graham Kelly. In a now-deleted screenshot that Heslep posted to Facebook, a friend asks him if he knew about the alleged relationship between Hill and Kelly. 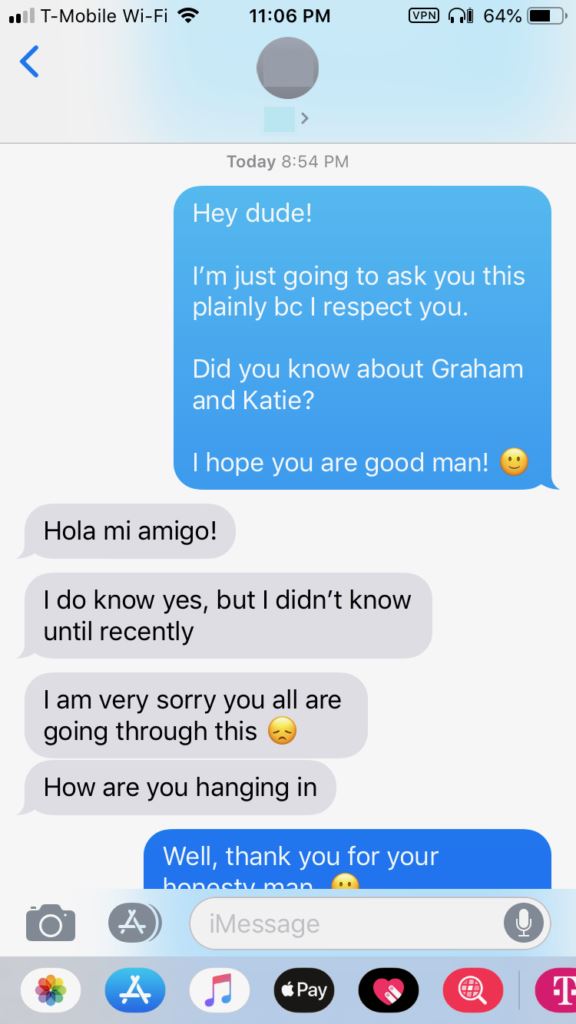 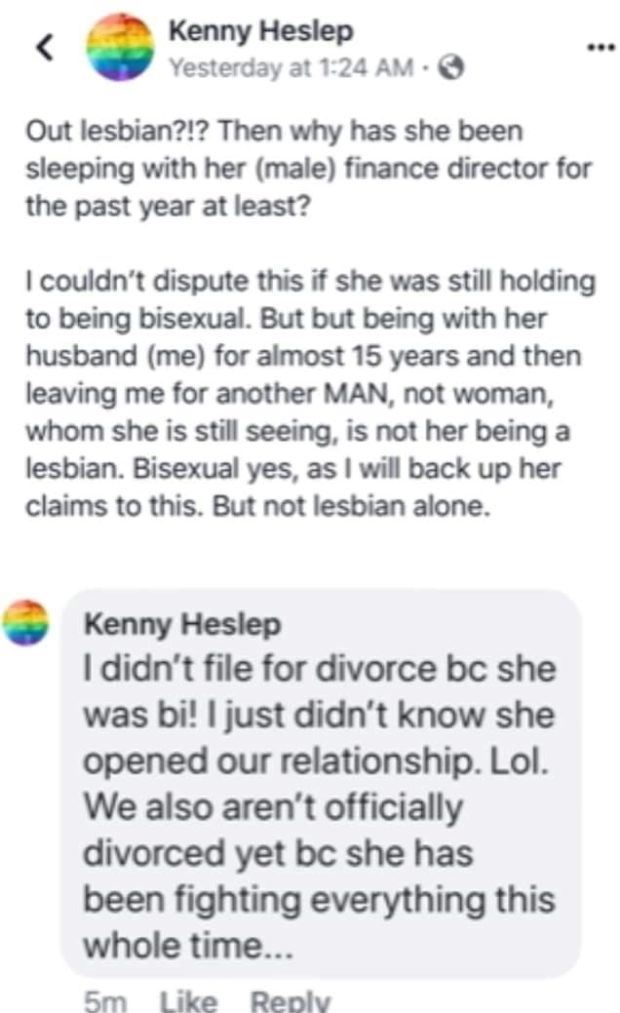 Here is a photo of Hill and Kelly: 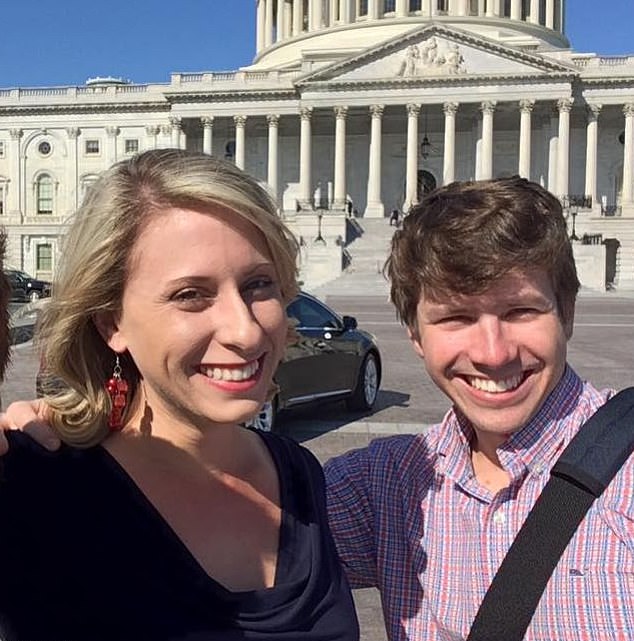 Hill’s reported relationship with her former campaign staffer is more problematic than that of Rep. Ilhan Omar, though, because Kelly is now Hill’s Legislative Director. Congressional pay records show that Kelly was paid just over $20,000 for the 2nd quarter of 2019.

Engaging in a sexual relationship with a subordinate is strictly against House Ethics rules. The Code of Conduct that members of Congress must abide by states:

Hill disputes that she was having an affair with Kelly.

There has also been a very disturbing photo of Katie Hill sitting naked and brushing her female staffer’s hair. We won’t show it here, but here is the link. It raises the question “What in the actual hell?!” and the realization “Oh my! Someone else had to take that photograph!”

Texts between Heslep and the staffer paint a very different picture than just an unusual sexual relationship between consenting adults. (Heslep’s portion of the conversation is in the blue text bubble.) 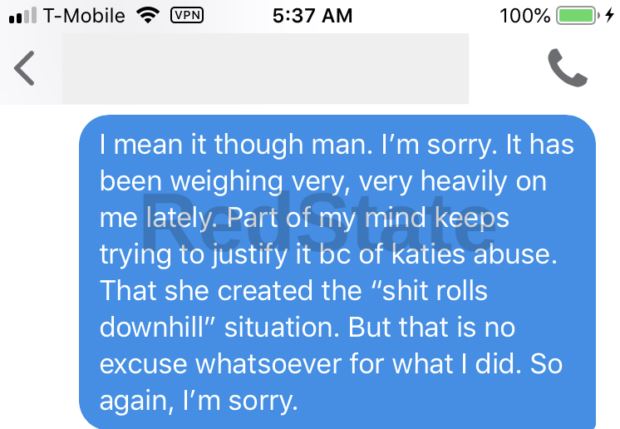 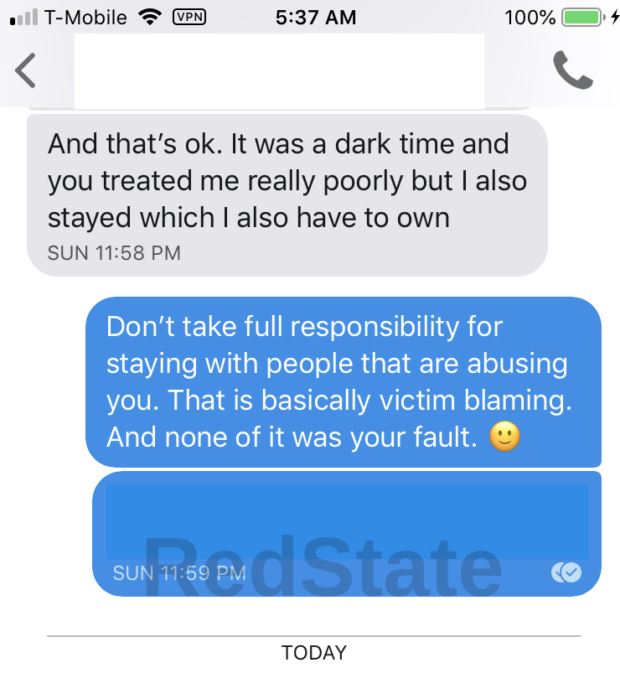 The staffer called the relationship “toxic.” 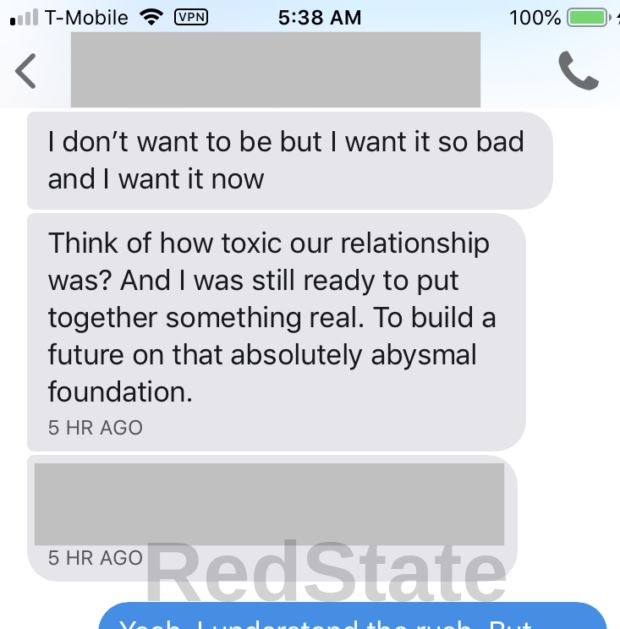 In this June 12 exchange, the staffer tells Heslep what she was losing aside from the relationship. 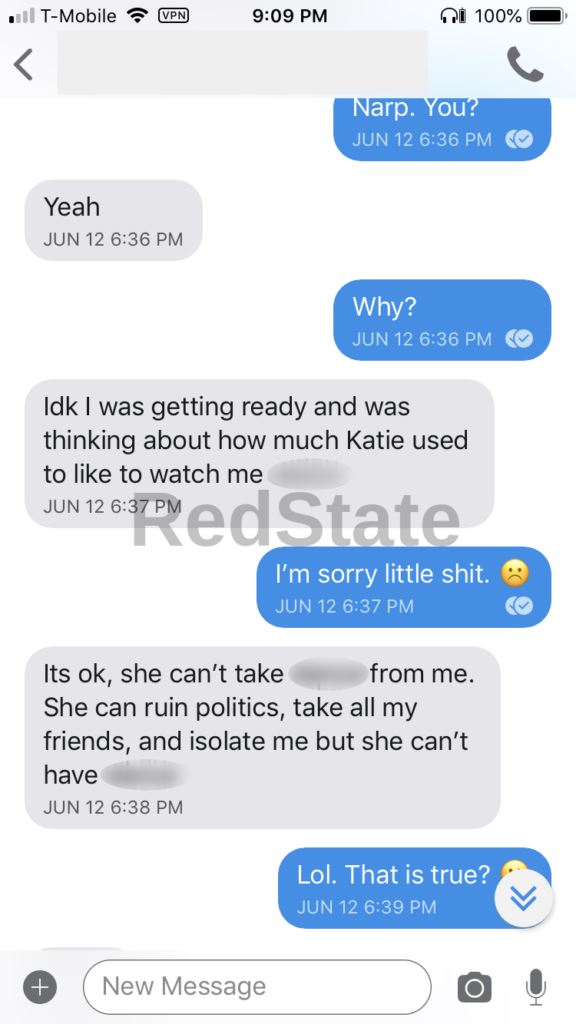 The staffer, who continued to work for Hill’s campaign team, also texted Hill saying that she made her feel uncomfortable after the relationship broke up. 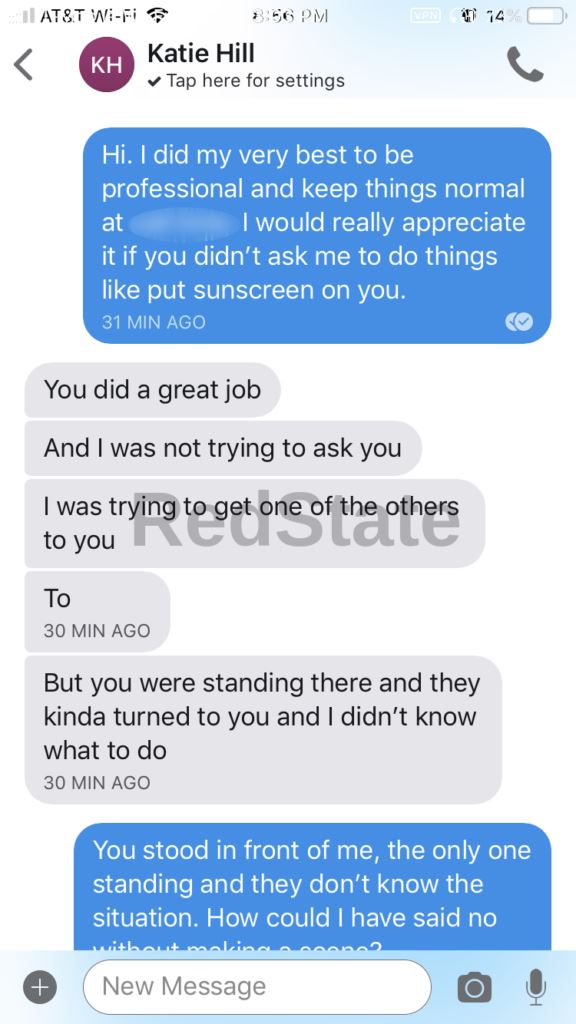 She also explained that she was “terrified” to push back against Hill. 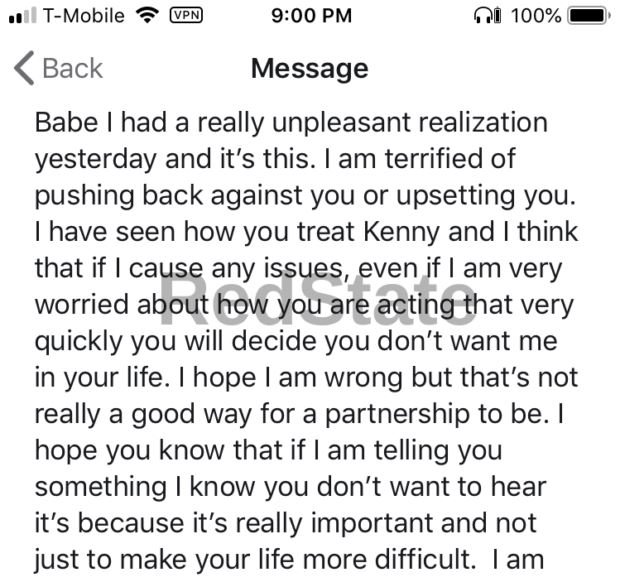 So, Katie Hill may have violated ethics rules by having a relationship with Kelly, but she may also have scuttled the career of a woman who had an interest in politics because she suddenly became tired of a committed relationship.

Meanwhile, Katie Hill was quite bold opposing Justice Kavanaugh and jumped on the ridiculous Julie Swetnick allegation calling the man who was a sitting Circuit Court Judge a “serial predator.”

Julie Swetnick risked everything to come forward with her story and she is not alone. This is not just about the Supreme Court, this is about believing women and protecting survivors. I've lived this reality and I know why so many of us never report.

During her campaign, Katie used her marriage as an appeal to voters. She made no mention of the “throuple” status with her campaign staffer.

Two months before the election, she wrote: ‘I am able to throw my all into this race because my husband, Kenny, is the toughest backbone anyone could ask for. He is at my side on my best days and on my worst, or or off the trail.

‘Kenny, you are my best friend and the love of my life,’ she wrote about the man she now calls ‘abusive,’ before adding: ‘I am so proud of the life we’ve built together and I can’t wait to see what we do next.’

Hill has described herself as bisexual all her adult life. She told the LGBTQ magazine The Advocate: ‘I’ve been out as bi since I was a teenager, right after high school,’ saying it was part of being an ‘honest, transparent politician.’

Whoa, Nelly! That is some weird stuff right there!

Frankly, I didn’t even want to touch this story, but now that the allegation has been made that the campaign staffer thought that the relationship was “toxic” and that she feared to push back against Hill puts this firmly into the #MeToo category. In addition, despite Hill’s denials, several people have come forward alleging that Hill was indeed having an affair with Graham Kelly, and that violates House Ethics rules.

It’s not just a salacious story about someone’s sexual proclivities behind the scenes, it’s about possible wrongdoing and Hill using her position as a Congresswoman to prey on her underlings and tossing at least one of them aside when she felt like it. If Hill were a man it would be wrong. Is it okay just because she’s a woman? I don’t think so.

It should be noted that Rep. Katie Hill is the Vice-Chair of the House Oversight and Government Reform committee — she was touted as a “rising star” in the Democratic party.

Is this the kind of person that should be making decisions on the ethics of government? How about she gets her own house in order first?