If only there were some sort of legal mechanism keeping tinpot dictators from making decisions about what free citizens can and cannot say.

Oh, wait. Don’t we have something like that already? The First something-or-other?

It’ll come to me.

Yes, in this bubble-wrapped culture of ours that cannot distinguish words from actual violence, there is a new proposal in the works. A proposal to literally outlaw the use of the word Bitch.

(So much for that old Jay-Z song about 99 Problems.)

As you can see, we’re not making this up:

Massachusetts lawmakers are considering a bill to ban the word "bitch".

Bill H.3719, submitted by State Representative Daniel Hunt, would punish people who use the word by either imprisonment for not more than 6 months, a fine of not more than $200, or both. pic.twitter.com/RmAEeJuhzf 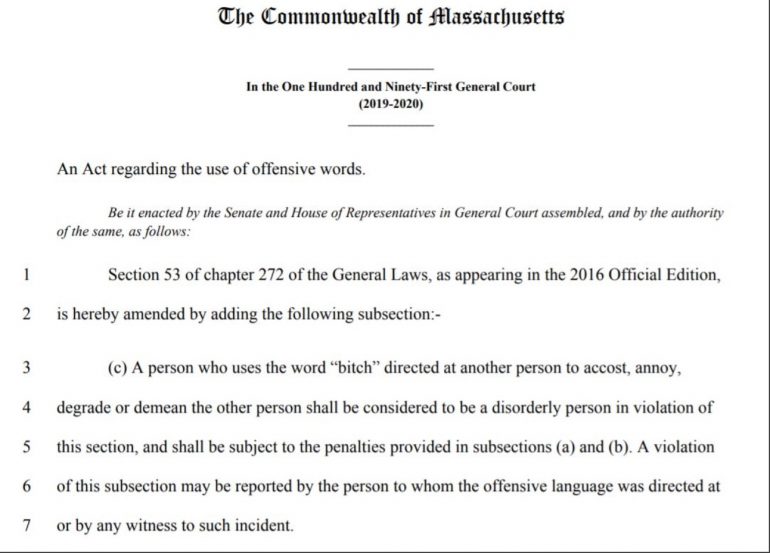 This tweet puts the stupidity of this law into its proper perspective.

Massachusetts Democrat proposes infringing free speech rights by making it illegal to call someone “bitch”. But calling them a motherfucking asshole would still be just fine.https://t.co/bU6mLgIRNB ts

The only thing it would accomplish (supposing anyone actually followed this stupidly draconian law) would be to prompt greater creativity in our insults, sexist or otherwise.

The act was proposed by Democratic representative Daniel J. Hunt.

Hunt told the Boston Herald that he filed the bill after being asked to do so by a constituent. “Any time a constituent approaches me with something that is of concern to them, I follow through with it,” he said. “In this instance, someone asked me to file a bill that they deemed was important and I thought it was a good exercise to let that bill go through the process.”

While critics charge that the bill likely violates the First Amendment, Hunt told the Herald that even if it does, his bill could “illuminate the exhaustive legislative process for people that might not normally be engaged.”

The Massachusetts Republican Party mocked their counterparts for the bill. “Beacon Hill Democrats like [Dan Hunt] are fearlessly taking on the biggest problems facing the commonwealth,” the state GOP said on Twitter, asking followers to attend the Judiciary Committee hearing if they “believe free speech matters.”

South Park had a fantastic and timely episode that kicked everyone in the ass over having the wrong attituded about Chinese censorship. If only someone like them had something to say about this, too.

(And if you don’t know by now to expect a language warning on a South Park clip, we don’t know what to tell you.)

You simply cannot legislate civility. Or haven’t you seen how the press talks about our President?

We reserve the right to use whatever language we wish to use in any of our interactions with other people.

We also reserve the right to express our full range of emotion, whether joy or displeasure with any words we please; from the English language — or any other — ranging from the highest prose of a poet to the foulest oaths of a tradesman, and anything in between.