She attempted to claim Republicans were free to spout lies on Social Media. What she doesn’t realize is she just proved a very DIFFERENT point.

The Left has long since stopped pretending they believe in the First Amendment. She welcomes external controls on free speech… so long as those restrictions fall on people with whom she disagrees. Let’s remember just WHO she’s willing to give the store away to before digging into her stunt.

And she’s happy to give those freedoms away to a group that is reportedly working on a tool to censor news in China that won’t upset a Communist State dictator that routinely violates human rights and currently incarcerates 100’s of thousands of ethnic and religious minorities while insisting that Churches take down the Ten Commandments and post the writings of Dear Leader in their place and worse — force them to replace images of Christ with an image of the Communist President.

Facebook is accommodating the demands of THAT heavy-handed government.

Such is the impartial and altruistic group to whom she wants to yield the power of censorship.

Hat tip to Tim Pool for bringing this to our attention, and helping this story cut through the noise.

I, for one, welcome our massive billion dollar multinational corporate overlords https://t.co/Zs599VCfRr 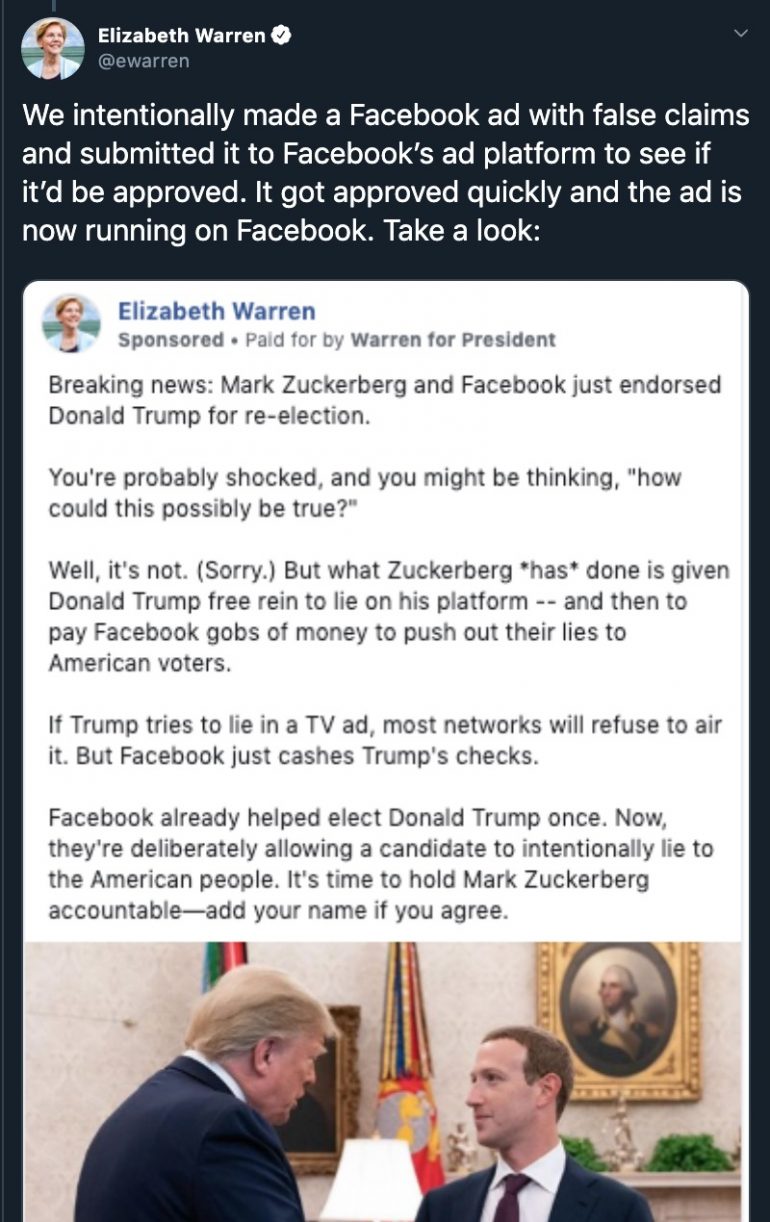 Here’s what the text says, for anyone reading it on a smaller screen.

You’re probably shocked, and you might be thinking, “how could this possibly be true?”

Well, it’s not. (Sorry.) But what Zuckerberg *has* done is given Donald Trump free rein to lie on his platform — and then to pay Facebook gobs of money to push out their lies to American voters.

If Trump tries to lie in a TV ad, most networks will refuse to air it. But Facebook just cashes Trump’s checks.

Wow. Where does one even START with unpacking this stupidity?

First, there is only ONE person lying in this ad, and it isn’t Trump.

All she has really proven with this stunt is that they will run a dishonest DEMOCRAT ad.

At issue with Facebook is the question of whether they are impartial or not.

It’s the difference between being a TV station and a phone company. TV stations own editorial control of everything that goes out on their airwaves.

Facebook claims to be impartial — think phone company — claims to NOT exercise editorial control over content (think TV Stations) and therefore bears no responsibility for the content. This allows them immunity to prosecution if someone puts up objectionable content.

To openly declare themselves editorial directors of content is to assume responsibility (and exposes themselves to legal liability) for the same. This doesn’t mean there aren’t other, sublter, ways for them to exercise editorial oversight.

Third, Silicon Valley did NOT determine the outcome of elections in the way she thinks.

Did they interfere in the election? Sure. A few ads were sold to foreign actors. But those same foreign actors (even the ones in the Mueller Report) ALSO promoted Hillary events.

That doesn’t mean Silicon Valley had no role in the election outcome. We’ve got Congressional testimony telling us that millions of votes were shifted to support Hillary.

During his testimony, Epstein told Senator Ted Cruz (R-TX) that in 2016, Google gave at least 2.6 million votes to Democratic candidate Hillary Clinton, “through bias and search results.” He stressed that was the lowest number.

When questioned further by Cruz, Epstein gave a more concise answer: “The range is between 2.6 and 10.4 million votes depending on how aggressive they were in using the techniques that I’ve been studying, (Read More)

Fourth, social media has been complicit in the Left’s ongoing assault on the Right’s political expression

They have been following the Clinton-affiliated Media Matters detailed battle plan to the LETTER since 2017, and yes, we have receipts. Check it out for yourselves, they wrote a White Paper on it and everything: Media Matters War Plan 2017.

Fifth, even groups whose ad money they accepted are routinely kneecapped in other more sublte ways.

Veritas has exposed the techniques whereby the ‘wrong’ political opinions were routinely throttled and blacklisted.

Their reach was diminished.

Legitimate stories with specific citations of sources are regularly flagged as ‘fake’, while insane and unfounded rhetoric from the Left goes out unchallenged — even when the facts are against them.

And in many cases — your own ClashDaily among them — FaceBook just pull the plug on their site entirely.

That’s what we saw in the ‘Great Purge’.

But thanks for raising this issue, Lizzie.