We all know that the Media(D) is scraping the bottom of the barrel these days in trying to keep themselves relevant, but do you realize how low they can go?

From the allegedly racist ethnic food aisle in the grocery store to how the “sexy peach” emoji was associated with impeachment, this is your week in dumb.

To think, this is just the nonsense that went from Monday through Friday this past week. This is certainly not a comprehensive list. There’s only so much stupid that a person can subject themselves to, and I have a Twitter account, so I see quite a bit of stupid.

This first example isn’t exactly media malfeasance, but it’s shocking how big a headline they used for this reprobate. 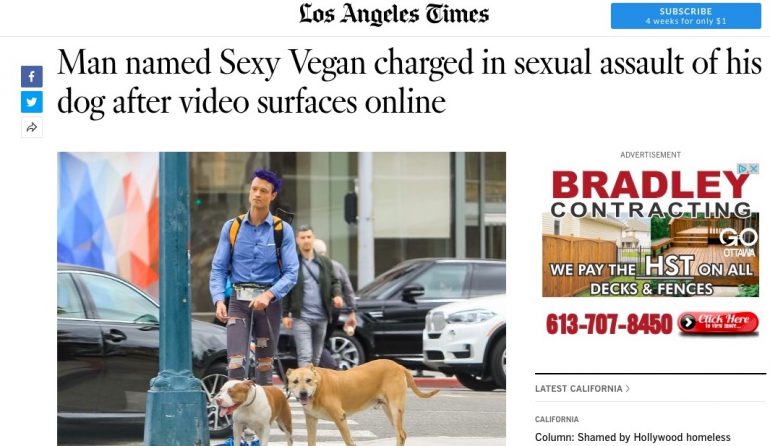 The Los Angeles Times reports that a man who had his name legally changed to “Sexy Vegan” has been charged with sexual assault of his dog after he posted a video online of the act. The charges include one count of sexual assault on an animal and one count of posting obscene matter. The man whose birth name was Hansel DeBartolo III could spend up to a year in jail if convicted of both charges.

Vegan’s IMDB profile says he moved to West Hollywood from a Chicago suburb in 2016 and legally changed his name to Sexy Vegan. He has his name tattooed on his forehead and chest in blue ink. The profile also describes him as a 2020 presidential candidate, an “Instagram sensation” and a singer who released a 28-track album on YouTube called “Ending World Suffering the Fun Way.”

The Washington Post ran an opinion article by Chef David Chang claiming that the “last bastion of racism” is the ethnic food aisle in grocery stores.

It went so far as to compare it to segregation in the Jim Crow era. (That might be a tad extreme.)

To millions of shoppers, the supermarket is just a place to stock up on produce and pantry staples to keep the family fed. But to others, especially children of immigrants who may already feel pushed to the margins of the American mainstream, the supermarket can be just another place to experience the sting of their outsider status.

The sting occurs whenever they walk down the “ethnic” food aisle, the section of the supermarket that, to some, plays out like a remnant of the Jim Crow era, when laws established separate facilities for African Americans in the post-Reconstruction South. Sometimes known as the “international” food aisle, or even “Asian” and “Latino” aisles, these rows can come across to the shoppers they seemingly target as de facto segregation, another kind of “separate but equal” policy that marginalized African Americans for generations.

The New York Times has now discovered that two of the top Democrats running for President are proposing socialism and that could hurt the economy. You don’t say?

WASHINGTON — Progressive Democrats are advocating the most drastic shift in tax policy in over a century as they look to redistribute wealth and chip away at the economic power of the superrich with new taxes that could fundamentally reshape the United States economy.

As they compete for the Democratic presidential nomination, Senators Elizabeth Warren of Massachusetts and Bernie Sanders of Vermont have proposed wealth taxes that would shrink the fortunes of the richest Americans. Their plans envision an enormous transfer of money from the wealthy to ordinary people, with revenue from the wealth tax used to finance new social programs like tuition-free college, universal child care and “Medicare for all.”

At least they reported it before the election.

Then there was this unbelievable waste of space in the Washington Post about how the “sexy peach’ emoji became associated with impeachment. Apparently, there is an urgent need to explain how the image of a peach is used to discuss impeachment.

If you want to understand how the ? sexy peach emoji ? has come to represent both the potential impeachment of President Trump and a butt, you must first look to the ancient Sumerians https://t.co/bMgbqd2SH4

If you want to understand how the peach emoji has come to represent both the potential impeachment of President Trump and a butt, you must first look to the ancient Sumerians.

Alternatively, you could just look at the word imPEACHment.

Rolling Stone magazine, which has been known in the past to play fast and loose with facts, reported that a meme that was retweeted by President Trump was a campaign video.

This was not a “re-election ad”.

Is the internet and journalism really THAT HARD?!? pic.twitter.com/pqjSyoVmzq

Magne Furuholmen, the keyboardist and co-songwriter for Norwegian synthpop band A-ha, has responded to a recent re-election video for President Donald Trump that visually borrows from the group’s classic video for “Take on Me.”

New York Times opinion columnist, David Brooks, couldn’t find a Trump-supporter in “flyover country” so he made one up.

His conversation between “Urban Guy,” who is portrayed as the savvy liberal who is carefully following the news and is concerned about the “norms” that have been broken by POTUS DJT, and “Flyover Man” who doesn’t pay attention to the President’s tweets, doesn’t really like him, and is only looking out for himself. 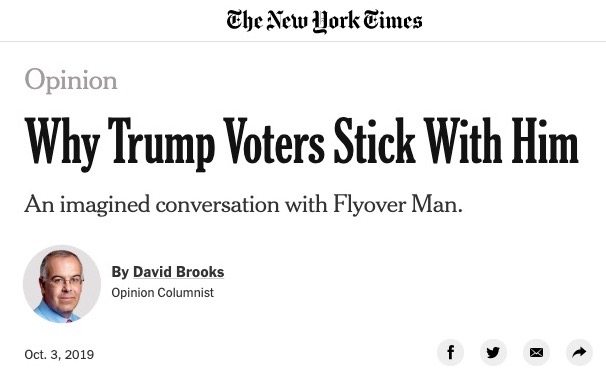 Urban Guy: I hope you read the rough transcript of that Trump phone call with the Ukrainian president. Trump clearly used public power to ask a foreign leader to dig up dirt on his political opponent. This is impeachable. I don’t see how you can deny the facts in front of your face.

Flyover Man: I haven’t really had time to look into it. There’s always some fight between Trump and the East Coast media. I guess I just try to stay focused on the big picture.

The big picture is this: We knew this guy was a snake when we signed up. But he was the only one who saw us. He was the only one who saw that the America we love is being transformed in front of our eyes. Good jobs for hard-working people were gone. Our communities in tatters. Our kids in trouble. I had one shot at change, so I made a deal with the devil, and you’d have made it, too.

Nothing in this impeachment mess makes me rethink this bargain. If people like you are unable to acknowledge my dignity and see my problems, I’ll stay with Trump.

It sure is easy to knock down a straw man when you build him yourself.

THIS IS HOW TRUMP WON.

The New York Times op-ed claims that “Free Speech Is Killing Us.”

This one is a real doozie.

Memes are compared to guns:

I imagined the same conversation, remixed slightly. What if, instead of talking about memes, we’d been talking about guns? What if I’d invoked the ubiquity of combat weapons in civilian life and the absence of background checks, and he’d responded with a shrug? Nothing to be done. Ever heard of the Second Amendment?

And then the simple solution to the problem of “bad speech” is — a state broadcaster giving you the news! (I can’t possibly imagine how that could go wrong…)

Congress could fund, for example, a national campaign to promote news literacy, or it could invest heavily in library programming. It could build a robust public media in the mold of the BBC. It could rethink Section 230 of the Communications Decency Act — the rule that essentially allows Facebook and YouTube to get away with (glorification of) murder. If Congress wanted to get really ambitious, it could fund a rival to compete with Facebook or Google, the way the Postal Service competes with FedEx and U.P.S.

Or the private sector could pitch in on its own. Tomorrow, by fiat, Mark Zuckerberg could make Facebook slightly less profitable and enormously less immoral: He could hire thousands more content moderators and pay them fairly. Or he could replace Sheryl Sandberg with Susan Benesch, a human rights lawyer and an expert on how speech can lead to violence. Social media companies have shown how quickly they can act when under pressure. After every high-profile eruption of violence — Charlottesville, Christchurch and the like — tech companies have scrambled to ban inflammatory accounts, take down graphic videos, even rewrite their terms of service. Some of the most egregious actors, such as Alex Jones and Milo Yiannopoulos, have been permanently barred from all major platforms.

And they wonder why we call them “Fake News.”