The Dems that think they are so VERY sure they have a smoking gun in that transcript sure haven’t read it very closely.

When looking at a document that is being used to accuse someone, it is just as important to pay attention to any details that exonerate the person you are accusing.

In this case, the accused is none less than the President himself, and the allegations take several forms.

One of them is that he’s some kind of a mafioso leveraging wealth in exchange for a ‘personal favor’. Others claim that Trump is corrupt, and secretly helping Puptin achieve nefarious ends… among other things.

1) Notice the conversation about the other European Powers 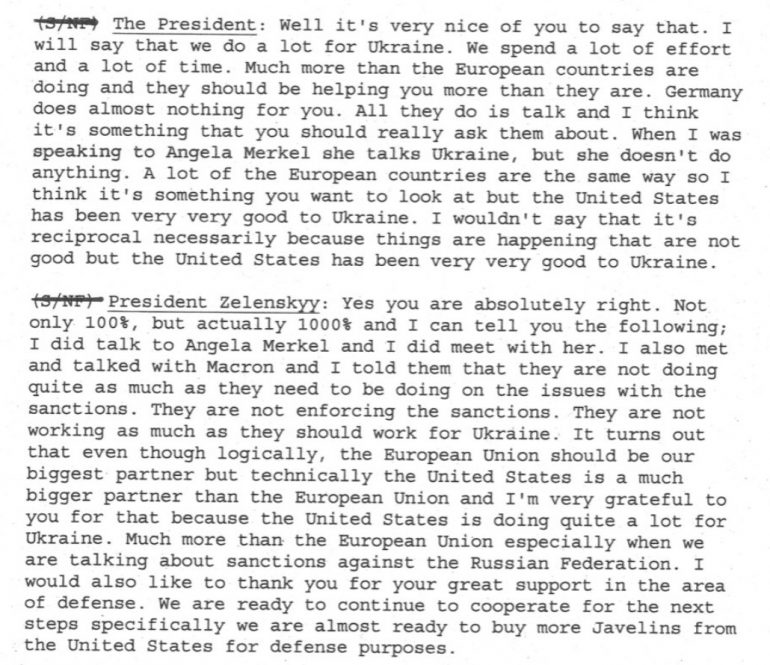 After POTUS mentions Merkel failing to follow through adequately for Ukraine, Zelenskyy responds.

This entire portion of the conversation is about sanctions against … Russia. It’s about how USA is taking the lead, and is more vigorous in the maintaining of those sanctions than the EU nations have been. That undercuts the ‘puppet of Putin’ narrative.

2) Zelensky pivots from sanctions to the military.

I would also like to thank you for your great support in the area of defense. We are ready to continue to cooperate for the next steps, specifically, we are almost ready to buy more Javelins from the United States for Defense purposes

Does this really sound like a supplicant who is afraid of funding sources suddenly drying up? There’s no indication that he is attempting to make the case for funding to continue. He is speaking as one confident that it is already in place.

If you notice, he’s already given thought to what his next big military purchase will be.

The dominant emotion read here is one of gratitude.

Trump mentions the already-completed spectacle of Mueller before Congress as happening ‘yesterday’.

That reminds us all that — as of this phone call — the Mueller investigation was complete, and closed. He waited until AFTER it ran its course.

Trump is now asking for help in tying up some loose ends in the 2016 election interference and (possibly) events surrounding the origin of Spygate. 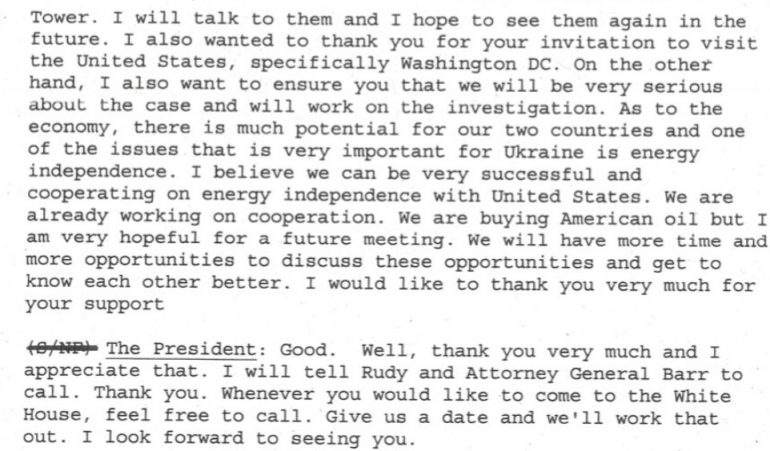 Much potential for our two countries and one of the issues that is very important for Ukraine is energy independence. I believe we can be very successful and cooperating on energy independence with United States. We are already working on cooperation. We are buying American oil but I am very hopeful for a future meeting. We will have more time and more opportunities to discuss these opportunities and to get to know each other better.

A big part of the leverage Russia has held over Ukraine’s head is the ability to shut off its fuel supply in the winter and plunge an entire nation into a killing cold. THAT is coercive.

Trump has likewise scolded Germany for building more pipelines to Russia, increasing Europe’s reliance upon Russia, and strengthening Russia’s hand against them.

Within that very piece of so-called evidence Shifty and Nancy are holding up against Trump are at least FOUR different pieces of exculpatory evidence that demonstrate the dishonesty of their allegation.

An honest prosecution would acknowledge them.

Nancy and Shifty, however, are leading anything BUT an honest investigation in this ridiculous circus.