How bad was it? Think ‘Trudeau Eulogy’ bad. Remember the one Prime Minister blackface gave in praise of Fidel Castro. Yeah, THAT.

Washington Post is criticized as being more interested in news that could hurt Trump than the objective telling of events the way journalists supposedly were supposed to all along.

This writer, for one, has a hard time remembering any time where there wasn’t a heavy slant to the left from the ‘official’ organs of the Media(D). And episodes like this one are not helping the perception any.

That may be the single funniest headline I’ve ever seen. @washingtonpost has made satire obsolete. https://t.co/enqTq6Q4iV

Are they on drugs, or do they just REALLY, REALLY hate Trump?

Even Brian Stelter had to say something about it (he focused on the retraction and apology).

The Washington Post is expressing regret for a terrible headline about al-Baghdadi that was "written in haste." Details here ?? https://t.co/MovCCQnvql pic.twitter.com/YKQ3YxrvdW

Are you sure about that Brian? Because we’re calling BS on that one.

They had it right the first time.

The Washington Post changed the headline on its Al-Baghdadi obituary from “Islamic State’s terrorist-in-Chief” to “austere religious scholar at helm of Islamic State.” pic.twitter.com/cs243EVz7W 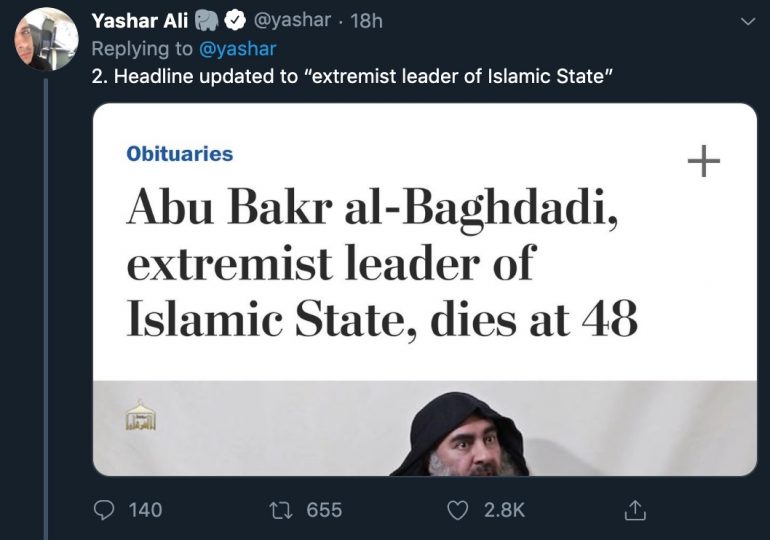 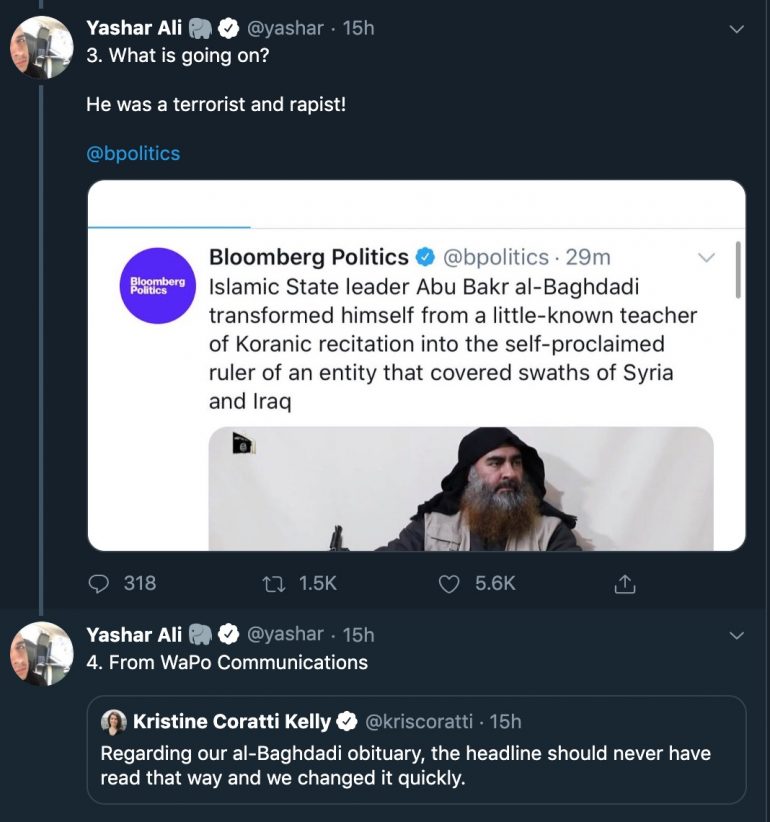 With a ‘mistake’ like that over TWO papers, is it any wonder we strongly suspect these people are all running under someone’s well-coordinated marching orders?

Now we have to ask Lefties: which of his “scholarly” positions did you like most? The beheading? The sexy slavery? The torture? The involuntary servitude? The intolerant religious fundamentalism? Which?

Missing from their article:

“Three of his children were at his side at time of death.”

The article doubles then triples down on the headline. It sounds like the favorite community college professor who was doing the best he could in a harsh world had an accident.

He died doing what he loved.

A satire, for now. pic.twitter.com/Un8uJYiDbp

Thanos the Mad Titan, who rose from humble beginnings to become an intergalactic advocate for population control, dies at the hands of unregulated spandex clad vigilantes.

The hashtag #WaPoDeathNotices was trending, hilariously. A sampling:

People often forget he was an artist, too:

Today we remember Vlad the Impaler. He spearheaded initiatives that touched the hearts of many. #WaPoDeathNotices

Democracy dies in darkness might not be the best slogan for a paper that gave such a warm obituary for a criminal warlord that literally murdered, raped, and pillaged his way across the region, leaving entire cities in ruins, and selling young women and girls into literal sexual slavery.

How badly does someone have to hate Trump, America or the West, to write an ‘obit’ like  that one?