Lindsey Grahm isn’t afraid to speak his mind. When he agrees with POTUS, he says so, and when he disagrees, he says that too — even though both actions get him grief.

He’s not the sort of guy to blow sunshine up someone’s @ss just to make them happy.

So when he brings out the superlatives to describe something they have done, you pay a little more attention than you would with someone who walks lockstep for or against.

And he just pulled out the superlatives to describe a speech that probably flew under most people’s radar.

It’s my belief that President @realDonaldTrump delivered the best domestic policy speech of his presidency today as he talked about the impact criminal justice reform, combined with a strong economy, can have on America.https://t.co/eh68mdD6Xw

With praise like that, here it is so you can judge for yourself.

What was it, and where was he speaking?

Before he delivered his remarks, he was presented with an award for his work on Criminal Justice Reform.

The award he was given is called the Bipartisan Justice Award.

“The Bipartisan Justice Award is the highest honor given annually to a public servant who has demonstrated the ability to work across the aisle to achieve meaningful progress in reforming our criminal justice system. The 2019 Bipartisan Justice award winner is President Donald J. Trump for his Bipartisan leadership in the passage of the historic First Step Act. The award is being given by the 20/20 Bipartisan Justice Center, a non-profit organization founded by 20 Black Republicans and 20 Black Democrats in 2015, to elevate the issue of criminal justice reform above partisan politics.” — DailyCaller

During most of his remarks, President Trump primarily touted the First Step Act, a bipartisan measure he signed into law last December. The law reduces mandatory minimum sentences in some cases, among other changes. The long-term goal is to reduce the prison population.
Source: WLTX

Graham had more to say about the visit: 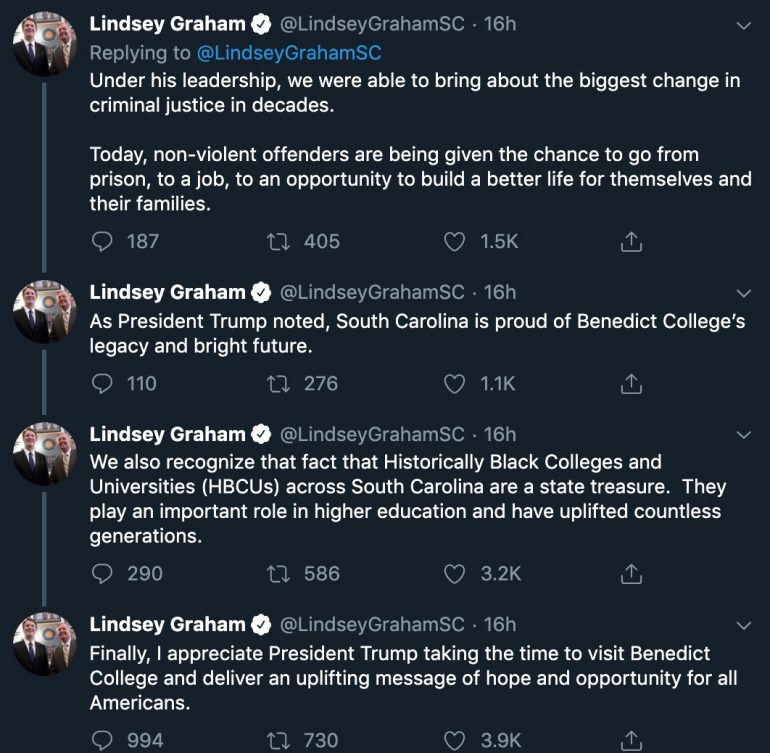 Trump has had some real solid domestic speeches over the last 3 years, his rallies, the SOTU, his addresses to the UN General Assembly… do you agree with Lindsey Graham about this one being the best?