These are the people that we are told to take seriously because they take the fate of humanity seriously. Are you sure about that?

An extremist climate activist movement, Extinction Rebellion, has mobilized protesters all over the world this week to demand that governments take immediate action on climate change.

They’re sorry that they’re blocking traffic, making you late for work and allowing your car to sit there idling for hours while they protest.

It’s because they’re terrified for the future. Besides, they’re really looking out for you and your children and grandchildren.

We're sorry… We don't want to disrupt you, your families and your loved ones but the inaction of our governments on the climate and ecological emergency is a death sentence. We are terrified, we are angry and we have to #ActNow. Join us in the streets – #InternationalRebellion. pic.twitter.com/fiTIDL4Ubn

They’re so serious, you guys.

Demonstrators have gathered for a fourth straight day as they attempt to drum in their climate message. This morning protesting outside the Sofitel on Phillip Street. https://t.co/OF81oZFF1j #ExtintionRebellion #7NEWS pic.twitter.com/8AvCozCbvZ

(Is someone going to tell them that their mats are made of PVC?)

They even have training sessions for their protesters.

8:30PM TONIGHT ON @SBSVICELAND, The Feed goes behind the frontline with #ExtinctionRebellion.
STREAM HERE: https://t.co/z58BTWyqAL pic.twitter.com/BNonDTuppJ

"If I can't dance, I don't want to be in your revolution." – Emma Goldman

And we can act like we come from out of this world
Leave the real one far behind,
And we can dance

This is how we’ll end climate change. One dance beat at a time! ✊? pic.twitter.com/x8RK5S73WP

I was skeptical of climate change, but this has convinced me. pic.twitter.com/EKLGHId1wn#ExtinctionRebellion

In the Netherlands, there was no problem “culturally appropriating” the Tango for climate activism.

Circle dancing is apparently a thing…

There’s also interpretive dance… (I couldn’t resist embedding this one because of Lauren Chen’s comment!)

I can smell this video… https://t.co/GEX3ZzPwAV

Protesters are supergluing themselves to the streets. (Check out the woman on the right who is trying to take her backpack off after gluing her left hand to the road.)

In Dublin, they dressed as trees.

Watch this lady in the red hat go! #ExtinctionRebellion pic.twitter.com/yijldyJTij

And all over the world, they have these weird Handmaid’s Tale meets Star Trek costumes.

As tents and belongings are cleared by police, The Red and Green Brigade add their sober faces to the 2000 stoic rebels gathered at Victoria Street near the Gov Department of Energy @savetheamazon @farmsnotfactories @friends_earth @greenpeace @extinctionrebellion @xr_youth pic.twitter.com/VAy0XgiONB

The red druids have grown in number. So many more now. They are too powerful for the white druids imo. Here they are on Horseferry Road, Westminster #extinctionrebellion pic.twitter.com/PXBIx09hug

They look like they are marching to a group suicide…..what is wrong with these people #ExtintionRebellion pic.twitter.com/K4STiooccY

Sometimes they combine the costumes with their songs like Soya the Cow.

They’re cool with using children to push their agenda…

…the younger the better.

‘I need to protect her future, I’m frightened’

Anna Moore is taking part in a nurse-in at Westminster as part of the @ExtinctionR protests.https://t.co/MbciosFVZH pic.twitter.com/kniuo8FWQB

Oh, that reminds me…

#ExtinctionRebellion have got their own hula dance troupe now pic.twitter.com/WpNAAmkLWp

But remember, it’s all orchestrated… and rather poorly.

Last week the Extinction Rebellion activists tried to paint the British Treasury with “fake blood” but they lost control of the hose and ended up making a huge mess on the street.

I’m sure that the fire truck that they’re using is completely eco-friendly, right? Otherwise, it would just be hypocritical.

Wow… Extinction Rebellion is spending $1.23 million over next two weeks to blockade London.

$185,000 will be spent on DIESEL BUSES getting protesters to the barricades.

Because… what's a climate event without hypocrisy?https://t.co/rUfVwQ5mNq

They dance better than they hide, that’s for sure.

Is it just me or does this look like a nutty, sad climate alarmist death cult that admits that its goal is to take down capitalism? 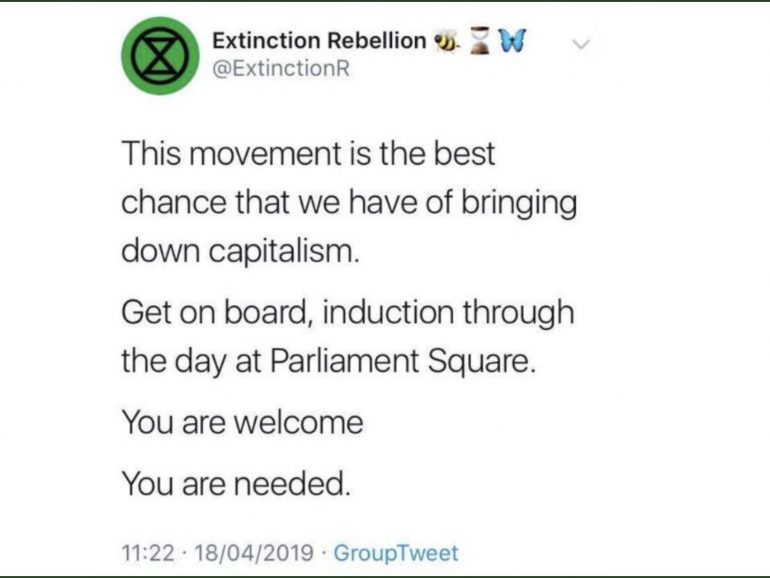 Meanwhile, in the real world, people are being harmed by their “action”.

#ExtinctionRebellion – as u shut down main roads leading London hospitals, I walked 20mins with some 1 who has CANCER so they could get to hospital for a procedure, as the car couldn’t get thru. 20mins might not sound long but when u hav CANCER IT IS! Thanks Extinction Rebellion! pic.twitter.com/kqbkfASRos

Blocking roads in order to protest the minuscule possibility of an increase in global temperature of just 1.5 degrees Celsius in 100 years is horrible behavior.

It’s one thing to protest, but quite another to block access to a hospital.

And the authorities let them continue without intervening.

This is the world we live in now.