Do you ever wonder why do none of these ‘mistakes’ ever accidentally paint the President in too POSITIVE of a light. Could it be that they aren’t really mistakes?

After a long series of foreign policy successes that even the Media(D) couldn’t spin into failures, the Media(D) thinks they see an opportunity with the conflict between Turkey and the Kurds.

It was the perfect lose-lose situation for them. If he had left US troops in harm’s way, he would have been denounced for recklessly throwing away the lives of US citizens… and for what?

If he realized those troops would not serve as a deterrent to a long-telegraphed move against Turkey’s regional rivals (seen by the Turks as ‘terrorists’), and he moved them out, he could be scapegoated as failing to protect the Kurds.

This is the media’s favorite game to play with Republicans. It’s a foreign policy ‘Do you still beat your wife scenario.

The left is quick to shout any sort of bad news that frames his decisions as a failure, and sometimes they won’t even vet it, first.

We reported on years-old footage from USA that was supposedly a Turkish attack on Syria. We’ve seen a woman claiming her small child had been killed — even though that child was seen to be blinking on camera.

Dems, including some 2020 wannabees, rushed to pin that (still-living) child’s blood on Trump’s hands.

And now, here’s another example.

Here is NBC’s original tweet. Notice the tone of ambivalence to the cost of human lives that is implied in it.

Here’s the correction… if you can call it that. (The damage of the original tweet, after all, is already done.) 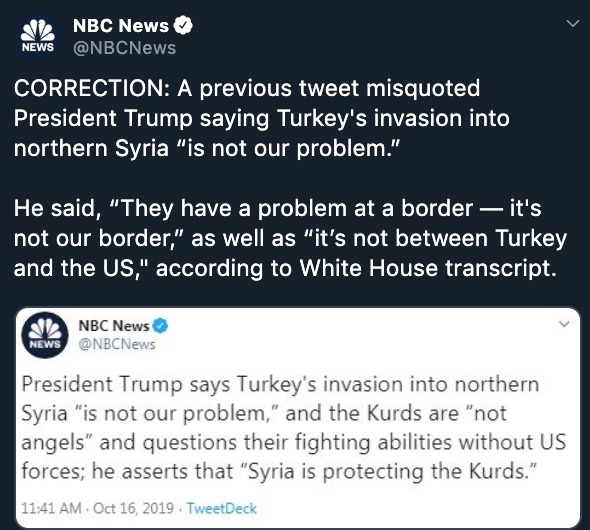 What do we predict any honest observer of this pattern will be saying in response?

That, or they’ll join the movement of youth cutting their cable completely.