This particular claim is extreme enough that we said ‘ya right’… until we looked a little closer at his claims.

This is the same China who has advanced biometrics targeting their own citizens and have created artificial islands to extend their own political and military power. So maybe we need to pause and reflect on the claim before writing it off as ‘crazy’.

In case it isn’t clear, China is NOT our friend. They are only biding their time while they get stronger at our expense.

And until Trump raised this issue at the national level, nobody really seemed to care.

They saw China as a market to be exploited. Cheap labor and a large untapped market were enough to turn a blind eye to the Chinese Communist Party and their aggressive position in the region, and in extending their influence internationally.

And now, payment comes due.

From the Hidden Forces website, which hosts a podcast, which we have included here:

In this week’s episode of Hidden Forces, Demetri Kofinas speaks with Chief Investment Officer of Hayman Capital Management and founding member of the “Committee on the Present Danger: China,” about the gathering threat posed to Western, liberal democracies and open societies by the Chinese Communist Party. Kyle explains how the CCP and its state champions have been using US capital markets to fund the development of China’s armed forces, the threats posed by a Chinese operated 5G network, as well as concerns about the acquisition and use of Americans’ genomic data by the Chinese government. Kyle also goes into detail about his thesis on Hong Kong, its peg to the USD, as well as the fragility of its banking system. Additional topics include the “reeducation camps” and reports of organ harvesting in Xinjiang, the Chinese social credit system, the Federal Reserve Repo market, and Kyle’s outlook for the macroeconomy.

While the transcript is behind a paywall, the website SmallDeadAnimals posted this helpful graphic summarizing some key points, with highlights. 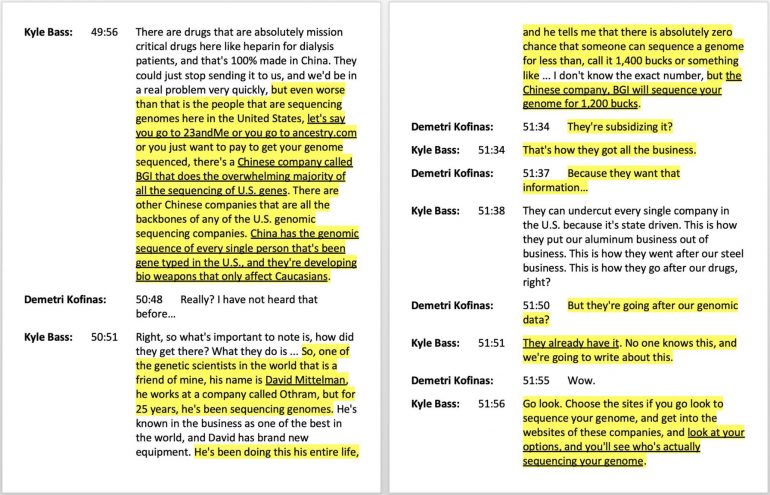 Here is a transcription of the highlighted sections, quoting Kyle Bass:

…but even worse than that [the potential of China withholding medications made exclusively in China] is the people tht are sequencing genomes here in the United States, let’s say you go to 23andme or you go to ancestry(.)com or you just want to pay to get your genome sequenced, there’s a Chinese company called BGI that does the overwhelming majority of all the sequencing of U.S. genes. There are other Chinese companies that are all the backbones of any of the U.S genomic sequencing companies. China has the genomic sequence of every single person that’s been gene typed in the U.S., and they’re developing bio weapons that only affect Caucasians

…so one of the genetic scientists in the world that is a friend of mine, his name is David Mittelman, he works at a company called Othram, but for 25 years, he’s been sequencing genomes.

…He’s been doing this his entire life, and he tells me that there is absolutely zero chance that someone can sequence a genome for less than, call it 1400 bucks or something like… but the Chinese company, BGI will sequence your genome for 1200 bucks.

KB: That’s how they got all the business

Interviewer: Because they want all that information.

… but they’re going after all our genomic data?

KB: They already have it. No one knows this, and we’re going to write about this.

… go look. Choose the sites if you go look to sequence your genome, and get into the websites of these companies, and look at your options, and you’ll see who’s actually sequencing your genome.