While everyone’s attention was turned toward Schiff’s circus in DC, we almost missed some news on the Southern Border.

It was good news about the flow of illegal immigrants being stemmed. Not bad for someone who has had to find solutions without ANY cooperation from Congress, right?

We stumbled on it when we were looking into Paul Sperry’s reports about the identity of the supposed whistleblower.

‘Crisis is over’ is a pretty bold claim. Is it legit, or is that just an exaggeration?

We dug a little deeper and discovered that — yes — the numbers really do back up the claim. 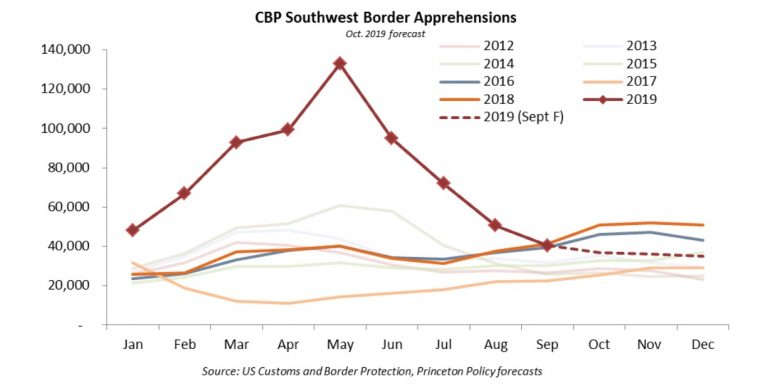 Those numbers came up as part of a Washington Examiner piece explaining the details:

While border apprehensions of illegal immigrants have reached a decade high, they did not hit the projected 1 million in 2019, leading experts to believe that the Trump administration has finally made good on its promise to stop the surge.

“The crisis is over,” said analyst Steven Kopits in a new report on the just-released fiscal year 2019 border crossing data.

… U.S. officials, in announcing Customs and Border Protection data this week, said that the crisis is not over and by apprehending 851,507 on the southwest border, the numbers show that.

But Kopits noted that the number trailed off after the administration stepped up its efforts on the border, and they are having a significant impact in stopping the surge of illegal immigrants.

“In the month of September, Border Patrol apprehended 40,507 persons at the southwest border, a decline of 20% from the previous month, and the lowest level in a year,” the immigration expert wrote in his latest report.
Source: Washington Examiner

When you realize that Democrats are actively trying to hamstring every effort to stem immigration levels, and have blocked as much funding as they could while propping up sanctuary cities and demonizing ICE, you realize what an impossible task was set before him.

And yet, somehow, he managed — without Congressional help — to find the mechanisms he needed to stem the tide.

He used political leverage with Mexico and other countries to align THEIR interests with OUR interests in keeping the border from being overwhelmed as it had been when the surges hit their peaks.