This single shift could be absolutely catastrophic to Democrat election strategies.

Remember when Trump challenged African-American voters to question the crappy results they’ve been getting from years of Democrat mismanagement of Blue Electorate strongholds with the straightforward question ‘what the Hell do you have to lose’?

It seems his question got traction. Furthermore, the real, tangible results that Trump’s policies delivered in providing jobs even to chronically under-employed regions have not gone unnoticed.

We’re seeing multiple polls agreeing that there is a massive shift in public opinion toward the President.

For one thing, the impeachment attempt to kneecap him didn’t play out the way Democrats had hoped:

A new Emerson poll finds President Trump’s approval has increased in the last month with 48% approval and 47% disapproval, a bounce from 43% approval in the last Emerson National poll in October. Support for impeachment has flipped since October from 48% support with 44% opposing to now 45% opposed and 43% in support. The biggest swing is among Independents, who oppose impeachment now 49% to 34%, which is a reversal from October where they supported impeachment 48% to 39%.
Source: Emerson

For another, two separate polls are showing Trump’s support among black voters in the 34% range. That’s a big deal for a candidate that had to deal with reports like this on the day he won his election:

What do you suppose a 20+ point swing in minority support would do to Democrats’ take-them-for-granted-seats in Blue-district urban strongholds?

Does it make sense now why Democrats are willing to go for broke with the Impeachment foolishness? If you can’t produce a BETTER candidate, you’ve got to find some attack that will discredit the guy you’re up against.

Lefties aren’t taking the news well and are already discrediting both the Rasmussen and Emerson polls.

They’re putting their faith in the NYTimes. These guys:

Ya….. @nytimes polling is so much more accurate….. ? pic.twitter.com/g6oiOo8THf

The ones who already know what stories they will tell about Trump and racism between now and 2020.

NYtimes poll in Florida- black support for Trump 11%, Hispanic 38%… that sounds about right

And fake token Republican Anna Navarro gave an opinion that was about as weighty as Swalwell’s embarrassing on-air fart. 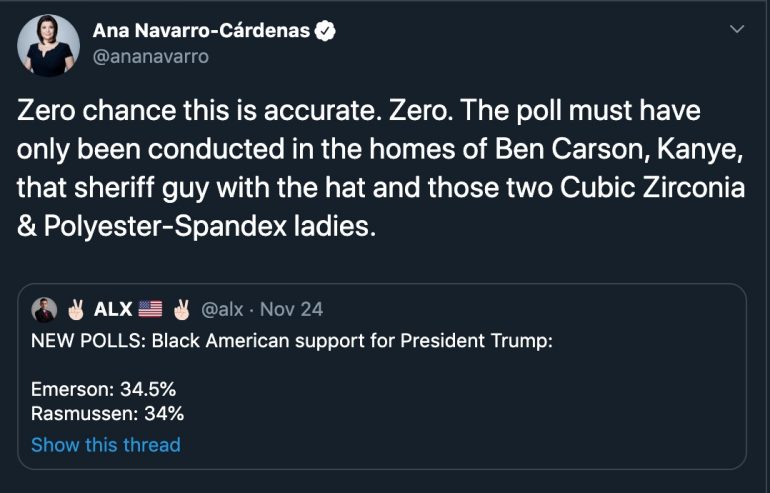 Not even trying to hide her fois-gras-eating elitist contempt. (Her answer to ‘and the horse you rode in on’ was that she usually rides in on a Maseratti. She’s the real ‘voice of the Everyman’, here, dontcha know?)

How about she just drop the pretense of being in any way shape or form a token Republican. If ever she were, those days are long since gone. She’s just as much a swamp critter as anyone else out there.

No, really, Anna, go ahead and ignore the stats.

We DID so enjoy being underestimated the last time around.

It will be absolutely DELICIOUS to duplicate that result to the profound astonishment a network of self-important Zucker-serving drones.