Is he directing this at the West, or at politicians in nations where homosexuals can still be killed?

Why does it seem that whenever Pope Francis dips his toes in the waters of politics, it’s to point an angry finger at the West?

The Pope used the occasion of a conference on Criminal Law to weigh in on who he would point to as being ‘nazis’.

He made the following statement:

“It is not coincidental that at times there is a resurgence of symbols typical of Nazism,” Francis said in an address to participants of an international conference on criminal law.

“And I must confess to you that when I hear a speech (by) someone responsible for order or for a government, I think of speeches by Hitler in 1934, 1936,” he said, departing from his prepared address.

“With the persecution of Jews, gypsies, and people with homosexual tendencies, today these actions are typical (and) represent ‘par excellence’ a culture of waste and hate. That is what was done in those days and today it is happening again.”

During the 1933-45 Nazi regime in Germany, six million Jews were killed and homosexuals and gypsies were among those sent to extermination camps.
Source: Canoe

This is an interesting point for a Pope to make for a couple of reasons.

First, is the Pope’s equating of the denouncing a particular sexual act that is denounced in scripture with hating people on the basis of race, contrary to the explicit command of scripture.

He does not explain why he has broken with a 2000-year-old Catholic tradition of affirming that homosexual sex is in conflict with the morality set out by the Triune God of scripture.

If opposing an activity as immoral is the same as hating the person who does it, then Jesus himself, who went everywhere calling people to ‘Repent for the kingdom of God has come’, and the apostles who did the same, including Peter and Paul are exactly the kind of hateful people the Pope has opposed.

His remarks appear to be directed toward the actions of a politician in Brazil, President Jair Bolsonaro who reportedly made very inflammatory remarks about his objections to homosexuality. Whether he meant those words literally, or merely for rhetorical effect, they were a statement in the hypothetical about having a gay son.

It makes one wonder why when Trump’s administration has been pushing to change worldwide attitudes toward homosexuality — to at minimum decriminalize it — the Pope would pick this particular issue to turn his attention to in his denunciation of bigots.

Here is a map of countries in which homosexuality can get you imprisoned or killed. Brazil, our readers will note, is conspicuously NOT on that list. 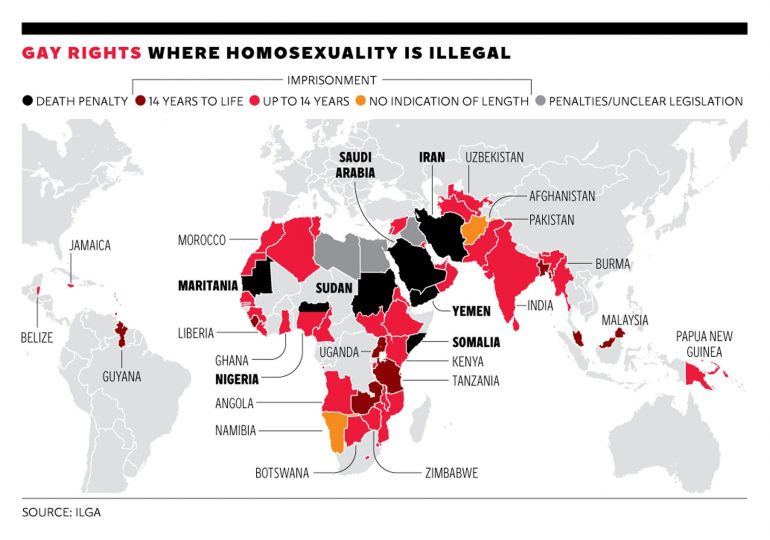 And it seems strange that he passed up an opportunity to shine a light on the insistence of China’s government to overstep its bounds and exert control over what the Church has been doing in China.

China can not only exercise a veto in the Bishops Rome appoints in China, but they have bulldozed churches and forced both the removal of Christian art and artifacts and the insistence of posting pictures of China’s President Xi in houses of worship.

And in a far more direct resemblance to Hitler, China has imprisoned hundreds of thousands or perhaps more than a million Chinese citizens belonging to a specific ethnic and religious minority.

Serious Question: Does China Have ‘Leverage’ Against A Disgraced Ex-Cardinal?

WTF: Why Is The World Bank Shoveling Cash Into China’s Uyghur Concentration Camps?