Some of those presidents are even still around to feel insulted by this.

Can you imagine the look on Bill Clinton’s face when he saw this news? Carter, Truman and the Left’s beloved FDR were also sitting in the shadow of the final bid awarded for this signed copy of Art of the Deal.

Trump surely signed hundreds, maybe even thousands of this book didn’t he? What made this one special?

The inscription on this one is just a little different. At the request of the book owner, Trump signed it ‘Future President’.

(b. 1946) Controversial American financier, deal maker and gambling mogul, once near bankruptcy, he recovered his wealth and successfully ran for president in 2016. Signed and inscribed book, “Trump: The Art of the Deal”, by Donald Trumpp with Tony Schwartz (New York: Random House), 1987, First Edition, 246pp. 8vo., his memoir and compendium of business advice. Trump signs on the front flyleaf in blue ink, adding a prescient inscription: “Future President”. In very good to fine condition. The book is accompanied by a typed letter of provenance from the original recipient, in which he describes purchasing the book at a signing event at the Trump’s Castle casino shortly after its release in November of 1987, and his request to Trump that he sign it as “Future President”. 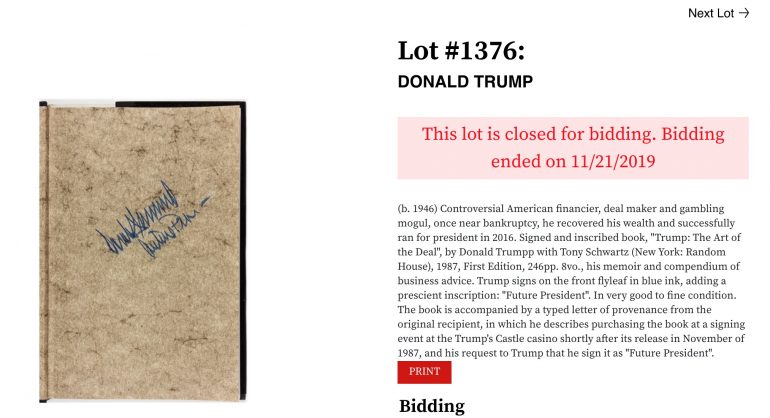 A signature of 1500 dollars on a book. Is that a big deal? It’s hard to know unless you have something to compare it against, right?

Click over to the very next numbered item on the lot, and there is a signed copy of an Inauguration invite for with a minimum bid of $200 that sold for $1375. 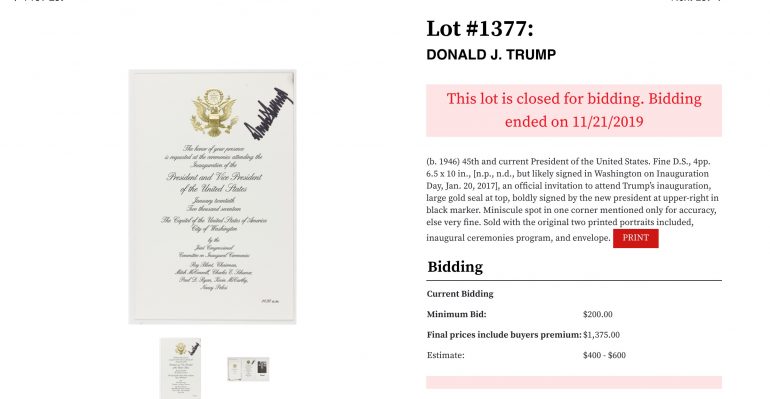 Compare it to OTHER presidents, however, and you see just how stratospheric those prices really are:

The autographed copy of Trump: The Art Of The Deal sold this week for $1,500, surprising Bill Panagopulos, Alexander Historical Auctions president, who expected a top price of $1,200.

He just told us:

“Books signed by presidents are widely desired by presidential autograph collectors. With our sale yesterday of a book signed by Donald Trump for $1,500, his books now far exceed those signed by his predecessors, including Harry Truman, Franklin Roosevelt, Bill Clinton, and especially Jimmy Carter, who has signed so many books, they are hard to sell for over $50.”
Source: WashingtonExaminer

For such a very ‘despised’ President, Trump’s doing pretty well, doesn’t he?