Holiday festivities came just a little early for Al Asad Air base in Iraq, as the Vice President came by to serve out the Thanksgiving bird.

While he was mostly there to encourage his troops, he had something to say about what was standing in the way of getting that raise he wanted to give them and the resources they need to maximize the success of their missions.

Pence said the administration would fight to make sure troops had the resources needed for their mission. “But we need Congress to do their job,” he said. “The truth is Congress should have finished their work on defense appropriations months ago. But you all know partisan politics and endless investigations have slowed things down in Washington, D.C.”

Pence said that he was with President Donald Trump in the White House situation room during the operation listening. “I’ll never forget the words. 100 percent confidence. Jackpot. Over,” he recalled to applause.

…Pence piled generous helpings of meat on their plates and greeted the soldiers by name — “Hey Gomez,” “Hey Mitchell,” “Hey Hulac,” — and asked them where they were from, offering a personal anecdote for each place. Orange County? “Our kids learned to surf.” Louisville, “a great place.”

Karen Pence had to prod her husband away from the reception line, telling him he needed to let someone else finish the job. “They tell me I gotta stop talking to people,” he said.

Pence then went to Erbil where he also spoke to troops and served them turkey. He met with the president of the Kurdish region of Iraq, Nechirvan Barzani, and said they spoke about Trump’s decision to leave U.S. troops in parts of Syria.
Source: McClatchy

"On behalf of the President of the United States and every American, for all the things we are thankful for this week, we are most thankful for all of you."@VP Pence & @SecondLady Karen Pence make unannounced Thanksgiving trip to Iraq to visit US troops https://t.co/qiruYRGQai pic.twitter.com/rhvbOhgi3K

Where else were they going?

Flying in a C-17 military cargo jet to preserve the secrecy of the visit, Pence landed in Irbil to meet with Iraqi Kurdistan President Nechirvan Barzani. The visit was meant to reassure U.S. allies in the fight against the Islamic State group after the US pulled troops from northern Syria, leaving the Kurdish allies in neighboring Syria to face a bloody Turkish assault last month following the Trump-ordered withdrawal.

…Pence said he welcomes “the opportunity on behalf of President Donald Trump to reiterate the strong bonds forged in the fires of war between the people of the United States and the Kurdish people across this region.”

Asked if the United States was facing a sense of betrayal from Iraqi and Syrian Kurdish allies over Trump’s actions in Syria, Pence said both groups, including Syrian Kurdish forces “who fought alongside us,” had no doubts about the U.S. commitment to them. “It’s unchanging.”

A senior U.S. official said Pence’s visit was meant both to reassure Iraqi Kurds who remain allied with the U.S. in the fight against the Islamic State group, as well as Americans who have long supported the Kurdish cause, that the Trump administration remained committed to the alliance. The visit was also designed to show Pence’s focus on foreign policy as Washington is gripped by the drama of impeachment.
Source: AP 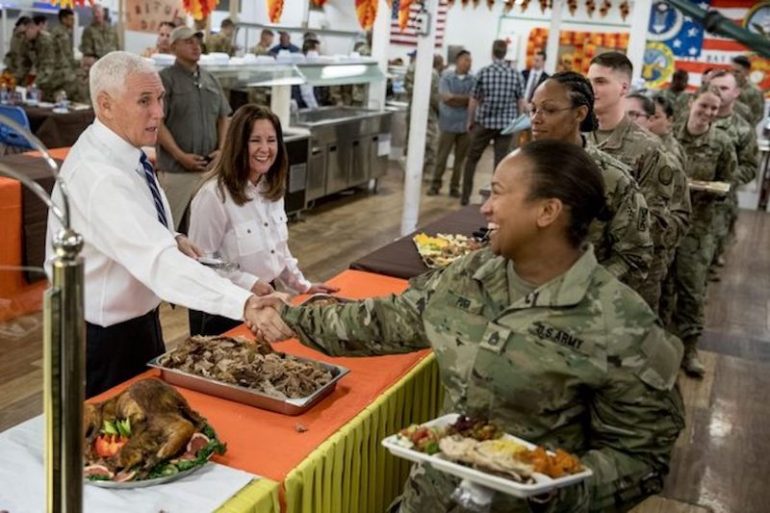