To think, the name may have been released by suspected leaker’s team after the Media(D) refused to publish it.

Now that the Impeachment Inquiry has been made official, the Democrats are releasing transcripts of the testimony of the select witnesses that they had gathered and questioned in the very private basement meeting room.

One transcript that they claim is “damning” is the testimony of Ambassador William Taylor. On page 236, one unredacted name stands out during the questioning of Ambassador Taylor — Eric Ciaramella. Republican committee lawyer Steve Castor asked Taylor directly if he knew the name Eric Ciaramella, who has been identified by investigative journalist Paul Sperry as the whistleblower.

Here is the screenshot of the transcript that was released by Rep. Adam Schiff(D-CA)’s Congressional office. 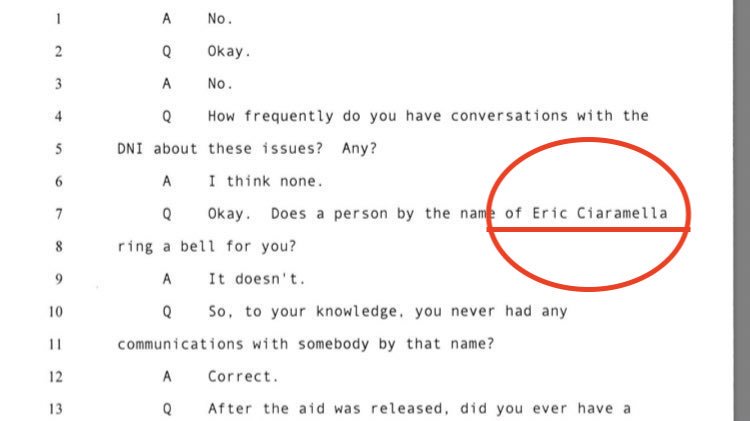 Alex from Turning Point USA is right on top of this story.

He’s noting that people are having their accounts suspended for “doxxing” the whistleblower’s name, but it’s been mentioned in the transcript.

Ciaramella’s name has also been mentioned in the Mueller Report and in several leftwing media articles like Salon and The New Yorker.

Twitter dot com wants to suspend you for Tweeting something found on Page 71 in Footnote 468 in Volume II of the Mueller Report.

The name has been mentioned:

He has also been mentioned in the media in the past:

So, let’s sum this up… the Media(D) can find and dox pro-Trump meme-makers and and elderly woman who shared what was later determined to be Russian propaganda, but regular folks on Twitter cannot share the name of a guy that was named in several government documents relating to both the Russian collusion investigation and the Ukraine phone call — the event that has triggered the move to Impeach the President. Oh, and that “whistleblower” also appears to be a pro-Biden partisan.

If these people didn’t have double-standards, they wouldn’t have standards at all.