In case you’re wondering, Alyssa, Americans are laughing AT you, not WITH you.

Alyssa Milano, whose head Trump has been living in rent-free for years, is perpetually enraged at her president.

Inspired, she invited Americans to participate in an empty religious ritual to magically ‘rid’ the country of his Presidency.

When she got dragged for it, she sharpened her pointing finger and wagged it at Christians. Here’s what she did, and more importantly, what she’s got wrong. 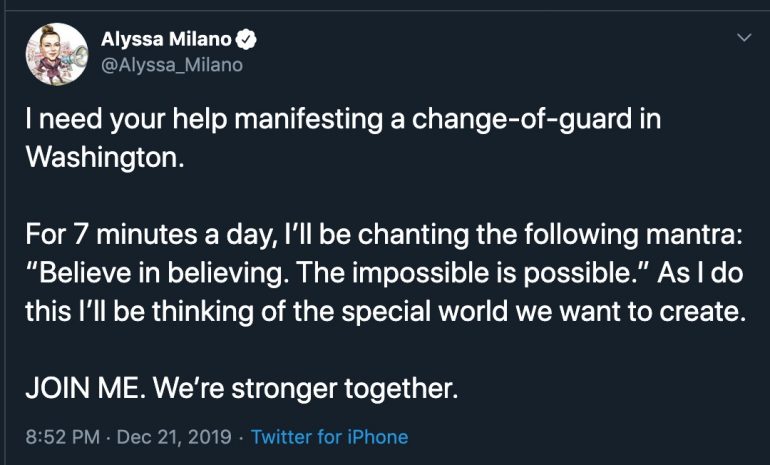 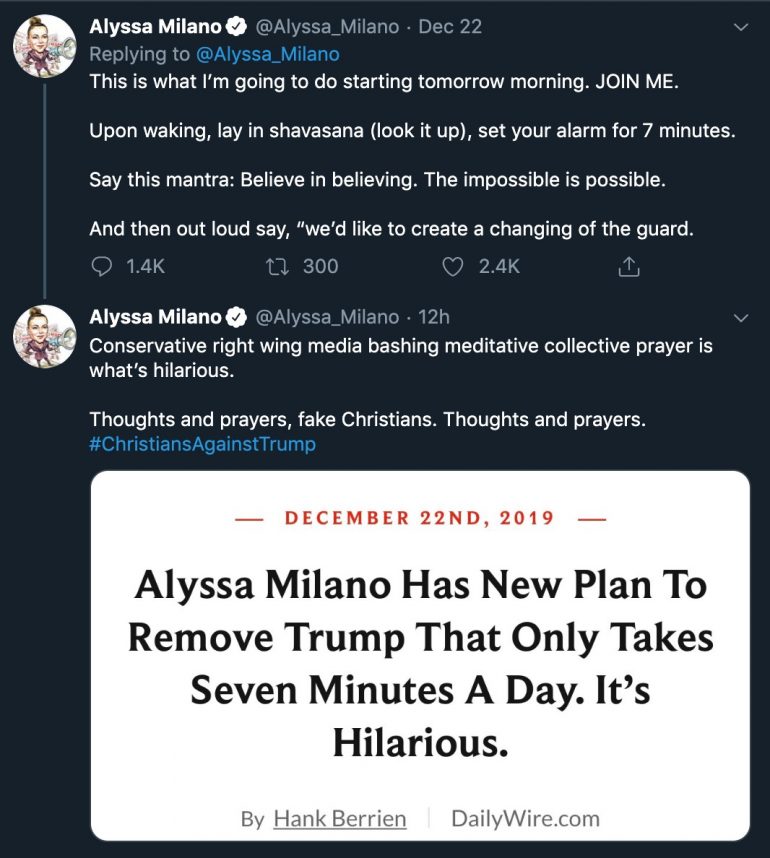 For one thing, it’s hard to take moral preening seriously when it’s coming from someone who got herself personally involved in the slander and character assassination of a sitting court judge who had never had a single black mark against his name in a lifetime of public service. She operated on a presumption of guilt that she herself would never accept if it were directed at herself or her loved ones.

For another, her ‘big’ issue appears to be unlimited abortion on demand. She will gladly attempt to torch the economy of states within the union that don’t march lockstep with her dystopian vision of morality but we haven’t heard her even raise her voice to a whisper about far more serious events abroad. Has she addressed China, Hong Kong or the Uyghurs?

How about the women in Iran risking arrest for protesting the compulsory use of Hijab? Have any thoughts on that?

Ever speak up about the countless young girls who’ve experienced Female Genital Mutilation — including some right here in America? Is THAT a concern to you? Child trafficking, including those smuggled in over the Mexican border?

Nope. But she HATES Trump and loves abortion. She’s even proud to brag about the ones she’s had, and how they’ve made life better for her.

THIS is the woman who wants to make America ‘better’ by invoking a magical mantra for seven minutes. When called out on it, she says ‘fake’ Christians are ‘bashing collective meditative prayer’.

There IS a God, and you ain’t him.

That’s pretty much the difference between the two approaches.

When Christians, Jews, Muslims, or most other people of any religious faith turn to prayer, it is an act of worship in which (in the broadest possible terms) the mortal appeals to the immortal for some sort of aid or guidance.

In Alyssa’s model, she is speaking a mantra to herself, and (theoretically) joining her wishful optimism to that of others (somehow) for an arbitrary period of time, to ‘create’ a generic result (by some mystical means). By what possible ‘logic’ she could confuse mantras with Christian prayer beggars the imagination.

Jesus himself said: “And when you pray, do not heap up empty phrases as the Gentiles do, for they think that they will be heard for their many words.”

Someone who has made a regular habit of mocking the prayer lives of devout believers, and sitting in judgment on their piety does NOT get a pass when she climbs the steps of her personal Twitter pulpit, presuming to lecture others about prayer.

Ignorance and arrogance are a bad look Alyssa.

Maybe lay off the religion and politics until you have something to say worth listening to… unless you’re here just for comic relief.

In that case, you should at least mark yourself as satire, so as not to confuse any addled minds among your base.