Will he ever learn? Social media pounced.

In what POSSIBLE world would he think this was a good photo to post.

Before we have a little fun showing what the Internet did with his photo, let’s discuss the photo itself.

Here he is, sitting (legs crossed!) in the ashes of his meteoric rise and fall as yet another disposable Media vehicle for ‘the cause’. When he flamed out — as someone so dramatically lacking in substance as Beto inevitably would — he was just another ordinary has-been coulda-been wondering what went wrong.

Whether he meant for it to convey that or not, the photo he’s posted sends a ‘what happened’ kind of a message. He was probably going for something else — maybe ‘deep’ and ‘pensive’ or whatever. 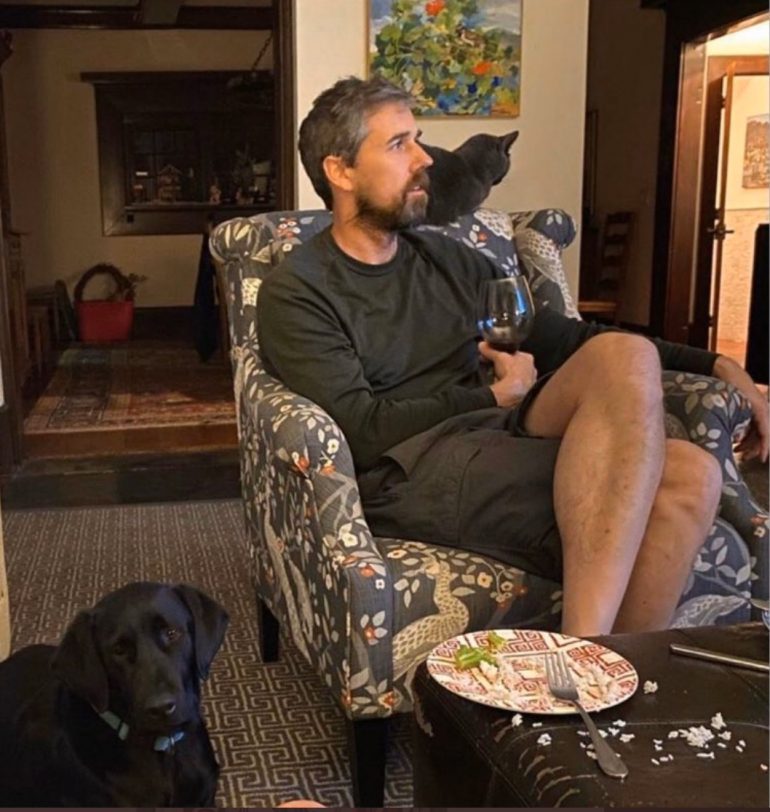 There’s a lot to take in, here.

Some people post photos of their food, he decided to *post* one of himself being a slob, having spilled what looks like rice on the furniture and leaving it there.

There are no PEOPLE in the photo. And he’s no doing anything remotely active. It looks more like sulking.

He is surrounded by pets. The dog seems like he’s in a hostage situation. The cat is bored, . (Sorry, trick of the light.)

Beta himself isn’t even engaging the camera / audience. He’s looking somewhere off to the distance to … something (probably not the horizon, though, since he’s indoors). Is it the kitchen? the bathroom?

Who knows? Who cares?

He’s cradling an empty-ish wine glass in what might almost be mistaken as a nod to Hillary’s spectacular flame-out.

The only thing missing in this picture is an audio track of ‘Loser’ by Beck.

What did the Internet have to say? (We’ll leave out the ones that include his kid in the photo because picking on kids isn’t cool. But we did notice he didn’t seem any happier to be there than anyone else in the photo.)

what is depression beto watching? pic.twitter.com/eNsIwhkATB

For once Beto’s dog isn’t the saddest looking one in the picture. pic.twitter.com/QBHMmMp2EH

Beto’s dog is so depressed there’s uneaten spilled rice within his reach pic.twitter.com/HBrOTIrxqQ

And the coup de grace:

And yet, this was the guy that — only a year ago — Democrats were pitching as Obama 2.0.

The only thing those prognosticators seem to have gotten right was him being ‘vanilla’… and not even in the way they meant it.