Democrats had a choice between holding careful and deliberate proceedings in line with the sacred trust they claim to be safeguarding and rushing to judgment like a runaway freight train… guess which one they’re going with?

We knew long before they called their first witness that they would gin up SOME kind of an excuse to throw the impeachment charge against him… it was only a question of what ‘Trumped-up’ charge they would settle on.

But they’re charging ahead at a breakneck pace. With zero respect for due process, or even hearing the full scope of relevant witnesses.

House Intelligence Committee chairman Rep. Adam Schiff (D-CA) is giving members of his committee just 24 hours to read and sign off on his report recommending articles of impeachment against President Donald Trump.

As Breitbart News reported Friday, House Judiciary Committee chairman Rep. Jerry Nadler has previewed the report, and suggested it will include claims of “collusion” with Russia — as well as Ukraine, Russia’s enemy.

And as reported Saturday, Schiff will provide the full report to committee members on Monday, who must sign off on Tuesday in time for the first hearing in Nadler’s committee on Wednesday, which will discuss the supposed constitutional and legal basis for impeachment.
Source: Breitbart

The same party that was slow-walking every damned appointment, every piece of legislation, everything they could possibly grind to a halt has suddenly found it has a forward gear.

Not in getting any business of the House done, that’s all still languishing, untended to.

They’re Hellbent on throwing down articles of Impeachment against the President and wrapping their political hit job up in a neat little bow before Christmas.

Rep Doug Collins, the Minority leader, is calling them out on their tactics shining a light on JUST how dishonest they have been.

And Chairman Nadler still believes moving at warp speed to jam an impeachment through the House is a good idea. This is unlike anything this chamber has ever seen. pic.twitter.com/ehF2vwjbZZ 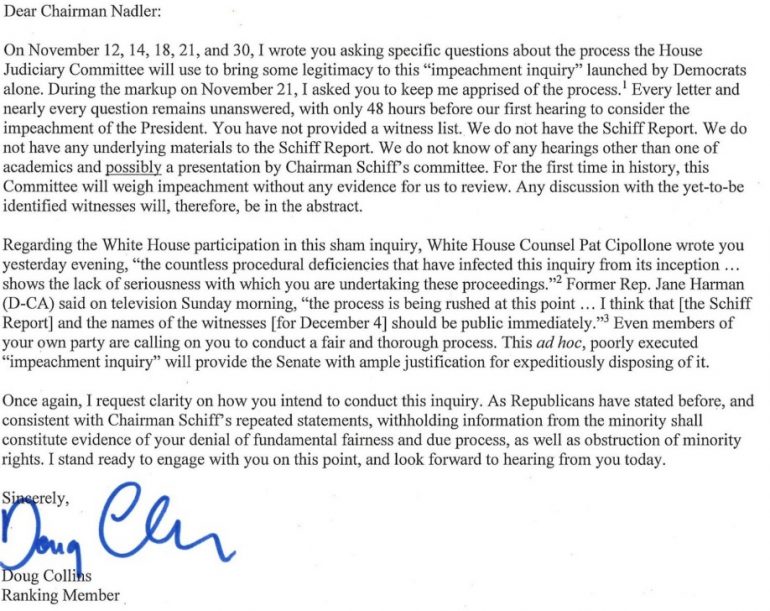 For such a sorrowful, somber and prayerful group as the Democrats have pretended to be in this showtrial, they sure are cutting a lot of corners.

Letters sent by Collins asking specific questions about the process have gone unanswered by the Democrats. Only 48 hours before the first hearing, no witness list was yet provided. No copy of the Schiff Report had been provided. The underlying materials upon which the Schiff Report were written… were no provided.

“For the first time in history, this Committee will weigh impeachment without any evidence for us to review. Any discussion with the yet-to-be-identified witness will, therefore be in the abstract.”

“Even members of your own party are calling on you to conduct a fair and thorough process. This ad hoc, poorly executed “impeachment inquiry” will provide the Senate with ample justification for expeditiously disposing of it.

“As Republicans have stated before, consistent with Chairman Schiff’s repeated statements, withholding information from the minority shall constitute evidence of your denial of fundamental fairness and due process, as well as obstruction of minority rights. I stand ready to engage with you on this point and look forward to hearing from you today.”

And, increasingly, neither are Americans more broadly.

As we have claimed from the beginning, this never had a chance of going anywhere. This was just an elaborate attempt to weaken a political opponent they were afraid of losing to if they dared to take on directly.

Here’s hoping the American public will see through their cynical political power-grab, and spank them back to the minority status they so richly deserve.

Preferably, a SMALL minority that can’t do much harm.