Ah, the codpiece — that bizarre fashion aberration that covered and accentuated men’s groins in the Renaissance era when men wore tights. Yes, that wee bit of material that makes teens giggle with discomfort and amusement when studying Shakespeare is back — thanks to Thom Browne’s Spring/Summer 2020 men’s runway collection.

Of course, this is haute couture, not exactly wearable couture. Still, as we have often seen, the scatological mass tends to traverse from the pinnacle to the valley smearing everything in its path. High fashion can be an indicator of things to come.

The line was revealed in June of this year but is getting a bit more attention after a recent GQ profile on the codpiece, Why the Codpiece Remains One of Menswear’s Most Essential Accessories.

The article opens claiming that the codpiece was popular for “just a few decades” but art and history both contradict that claim — it was a necessary piece of clothing to conceal the naughty bits when men wore hose. In the 14th century, hose consisted of two separate pieces worn on the legs. The codpiece covered that gap between the hose and concealed the thin linen drawers that men wore. As fashions changed, the codpiece did indeed become a fashion accessory that would portray virility and boast of *ahem* size, but to dismiss it as a curious piece of fabric is a bit disingenuous.

There really is no delicate way to open a story about a piece of horsehair-lined leather designed to cover and celebrate a man’s genitals, is there? So let’s just get on with it: The codpiece, as it is called, was wildly popular for just a brief few decades during the Renaissance, and yet it remains a cult object of comical fascination to this day. And it has, you may be delighted or terrified to learn, had a big year: it is the subject of a slim new treatise, the color of artisanal gatorade, entitled Thrust: A Spasmodic Pictorial History of the Codpiece in Art, by the English art critic and poet Michael Glover, released by David Zwirner Books. And it was an unexpected motif in the Spring 2020 menswear collection by American designer Thom Browne, shown in Paris this past June.

In an incredibly non-masculine haute couture menswear line, Browne pays homage to the codpiece while giving a nod and wink to its contemporary fellow — the jockstrap.

Male vanity, of course, used to express itself visually with outrageous displays of myth-building tailoring and portraiture, while it’s now become something more like an oil-and-vinegar combo of preening and insecurity. The insecurity often gets in the way of the preening, unfortunately, and perhaps that is why despite the codpiece’s brief relevance to the history of fashion, it has returned again and again as a token of male virility disguised as performance wear in sports and dance. That’s the spirit Browne’s seersucker runway captured, with its pirouetting ballerinos in tutus, codpieces proudly displayed like badges, a sendup of the overt sexual signaling of historical fashion. (Panniers, the women’s basket-like undergarment that made the hips two doors-wide, got similar treatment in the collection.)

Here is one of the designs that features the codpiece and the panniers. 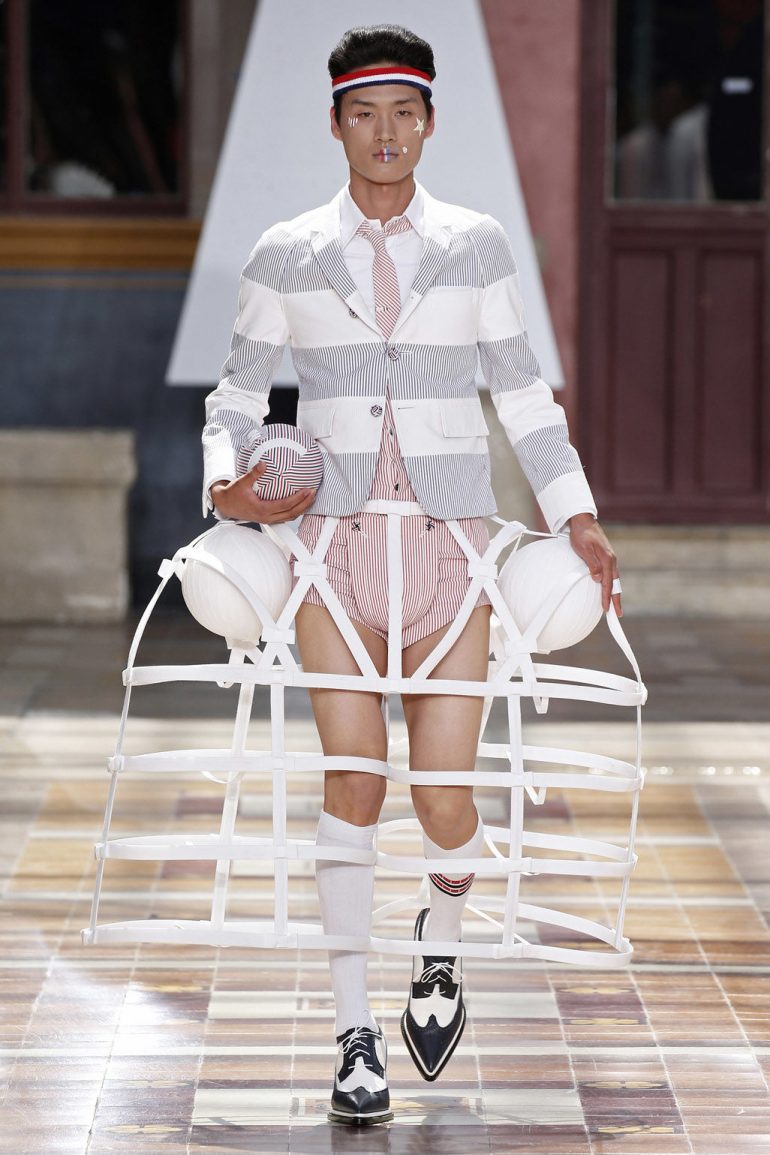 Watch the menswear collection in all its effeminate glory:

Beginning with a ballet to Tchaikovsky’s Romeo and Juliet would be a nice touch if anyone thought that this fashion line was directed to men who were interested in a romantic relationship with a woman. After looking at this collection, it’s clear that that is not the target audience.

This isn’t the first time that Browne has tried to bring back the codpiece, he tried in 2008, 2012, and 2014. He’s not even the only one to try this, either. Both Jean Paul Guathier and Vercace have used codpieces in their designs in the past.

So, is the codpiece really making a comeback?

I sincerely hope not.

But here’s the thing — the fashion industry just committed to becoming a “global leader” on climate change by reducing waste, watching their carbon footprint, and becoming a sustainable industry.

And yet, we have a men’s line with tutus, codpieces, panniers, corsets, and wire parasols all in dainty pastels.

That seems like a lot of waste to me.

Thom Browne’s collection isn’t atypical of haute couture — fashion houses consistently make things that only ever make their appearance on the catwalk. (Thank the heavens above for that!)

The high fashion designers are not just emasculating men with their designs, but they’re doing it while producing a lot of waste.

And it’s not just in the manufacturing of these one-off wonders, but consider the travel related to put on a show featuring items that no one will ever purchase. The design team, the models, hair, makeup, photographers, reporters, attendees… it’s an absolute waste.

But these are the same people that want you to go vegan, give up your car, and not go on vacation so that they can continue to jet to Paris, Milan, and New York for “Fashion Week” where they hand out useless swag and rub shoulders with people who think that these are “creative” designs.

Something is wrong with this picture, and it isn’t just the codpiece.