***CLARIFICATION: This article has been updated to include the information that Felix and Mariza Kjellberg own two homes, one in England and one in Japan. PewDiePie clarified this week that the house in Brighton was nearly flooded while the house in Japan was burglarized. Early reports had indicated that the robbery took place at the Brighton home.***

How can anyone celebrate a robbery?

Super-famous Swedish gaming YouTuber, PewDiePie, had his home robbed over the weekend. Pewdiepie, whose real name is Felix Kjellberg, was married just this past August. He and his wife Mariza live in Brighton, England and recently purchased a home in Japan. On Saturday Mariza posted the news to her Instagram story. 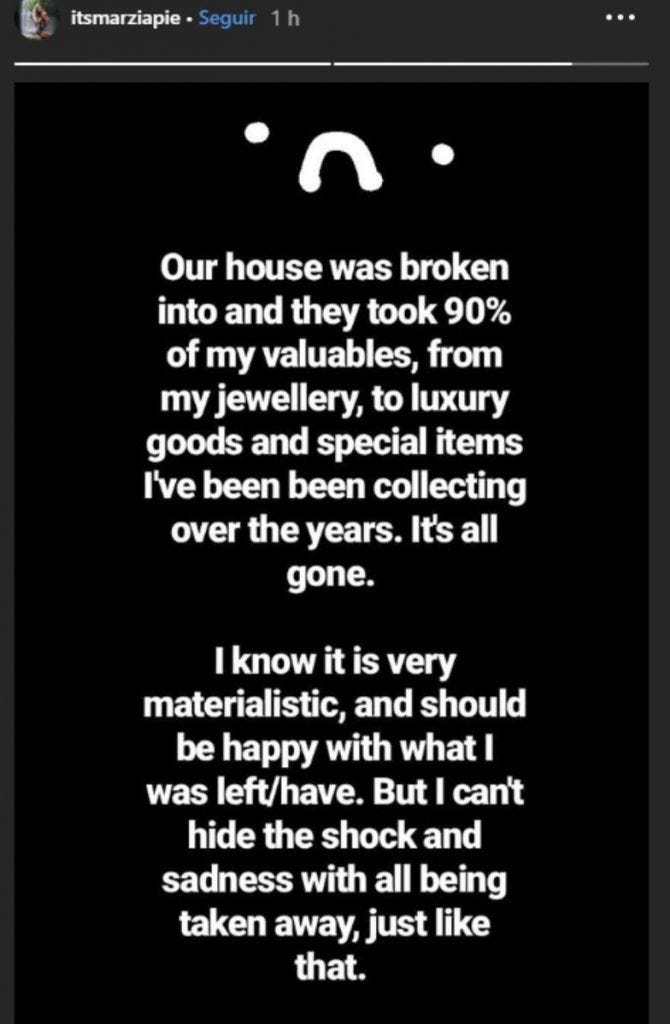 The robbery comes just days after Mariza had posted a video of flooding on their property from their neighbor’s sewage after heavy rains. She was concerned that the water would enter their home if the rain continued.

As for PewDiePie, he hasn’t talked about the robbery and has not confirmed if any of his own possessions were taken by the thief/thieves.

There are no further details about the invasion and there is no indication whether the police have any suspects.

PewDiePie, whose real name is Felix Arvid Ulf Kjellberg was born on October 24,  1989, and he is a Swedish YouTuber and comedian.

His YouTube video content consists of Let’s Play videos and comedic formatted shows and his videos are primarily made of horror and action video games. He registered the YouTube channel in 2010.

In the following two years, his channel grew substantially and in July 2012, it reached 1 million subscribers.

PewDiePie has over 102 million subscribers to his YouTube channel where he plays videogames, makes jokes, rates memes, and sometimes talks about what’s going on in the world. Kjellberg has also made headlines and has been labeled as “alt-right” because he wore a Nazi costume and said the N-word during a livestream. He has apologized for both of those incidents but the woke left won’t accept that anyone can make a mistake and change their behavior.

Many people absolutely hate PewDiePie and resent his success.

Here are some of those awful people celebrating the home invasion and burglary of a newlywed couple. 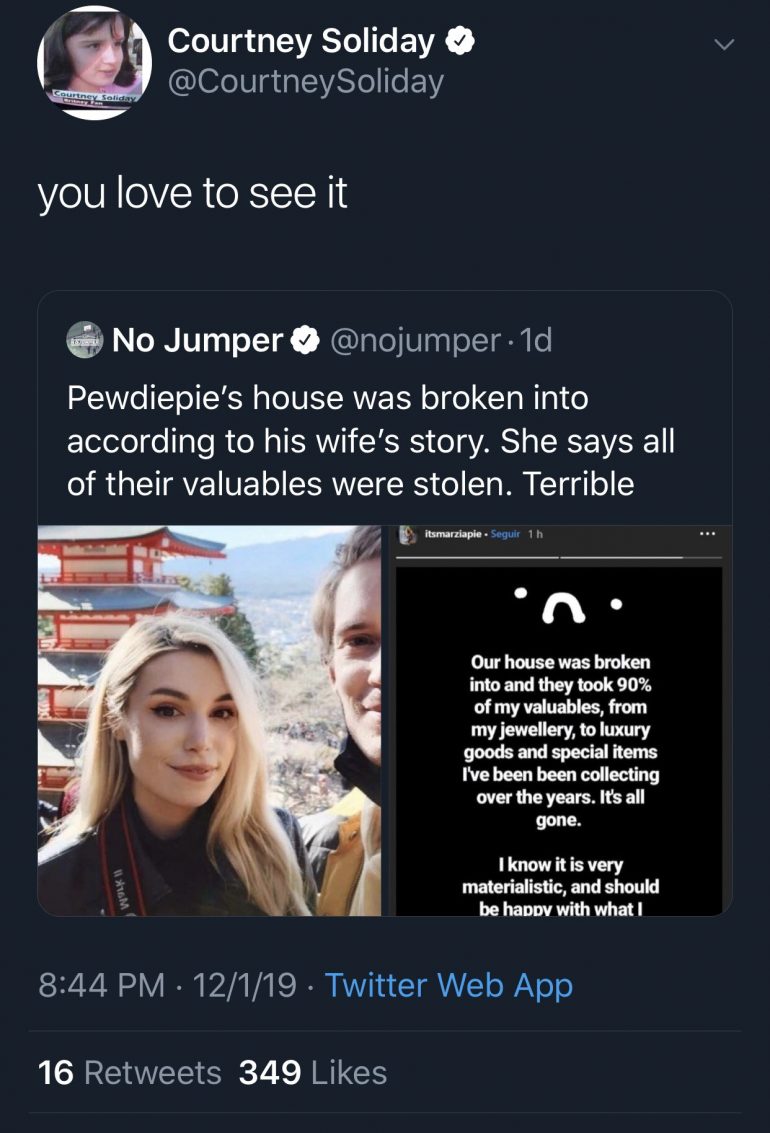 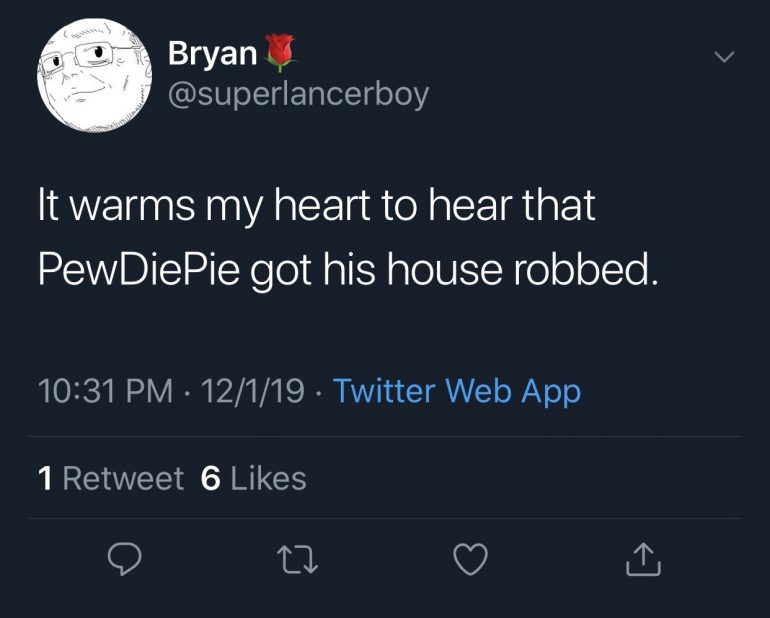 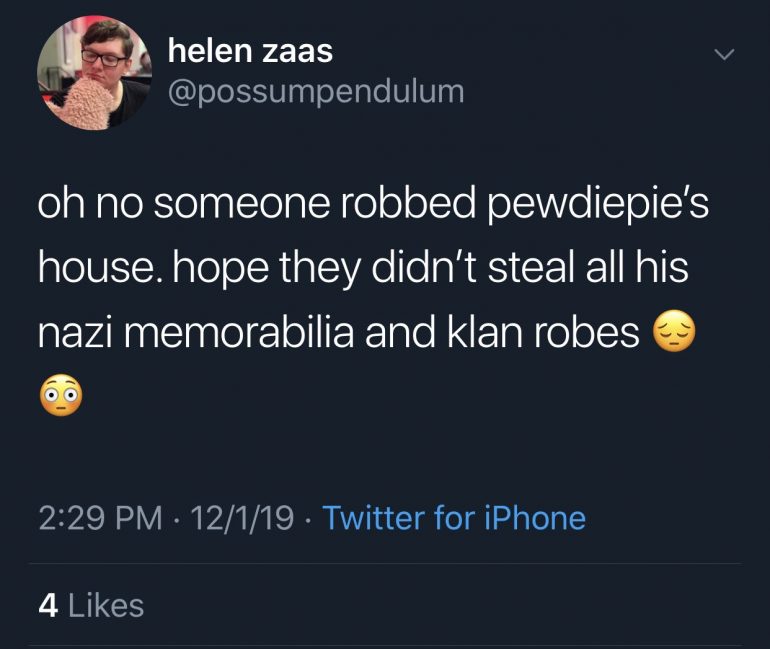 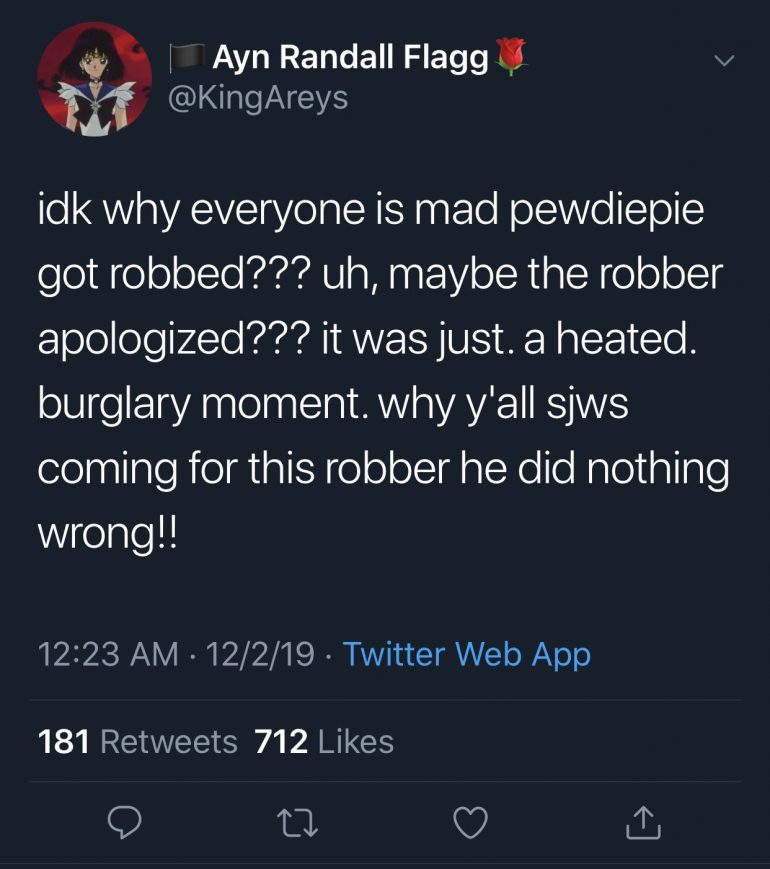 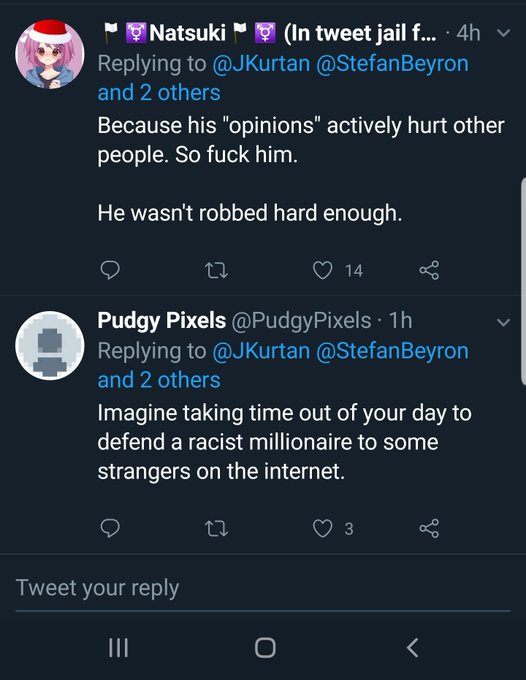 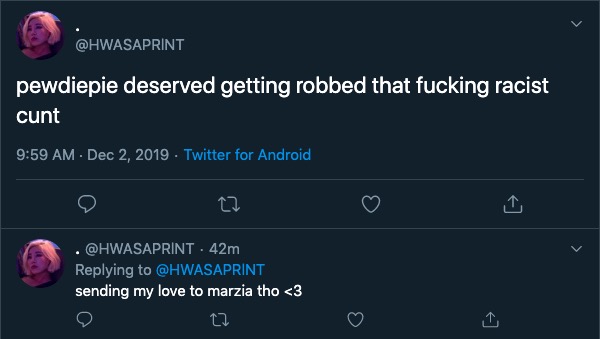 This K-Pop fan was just awful. 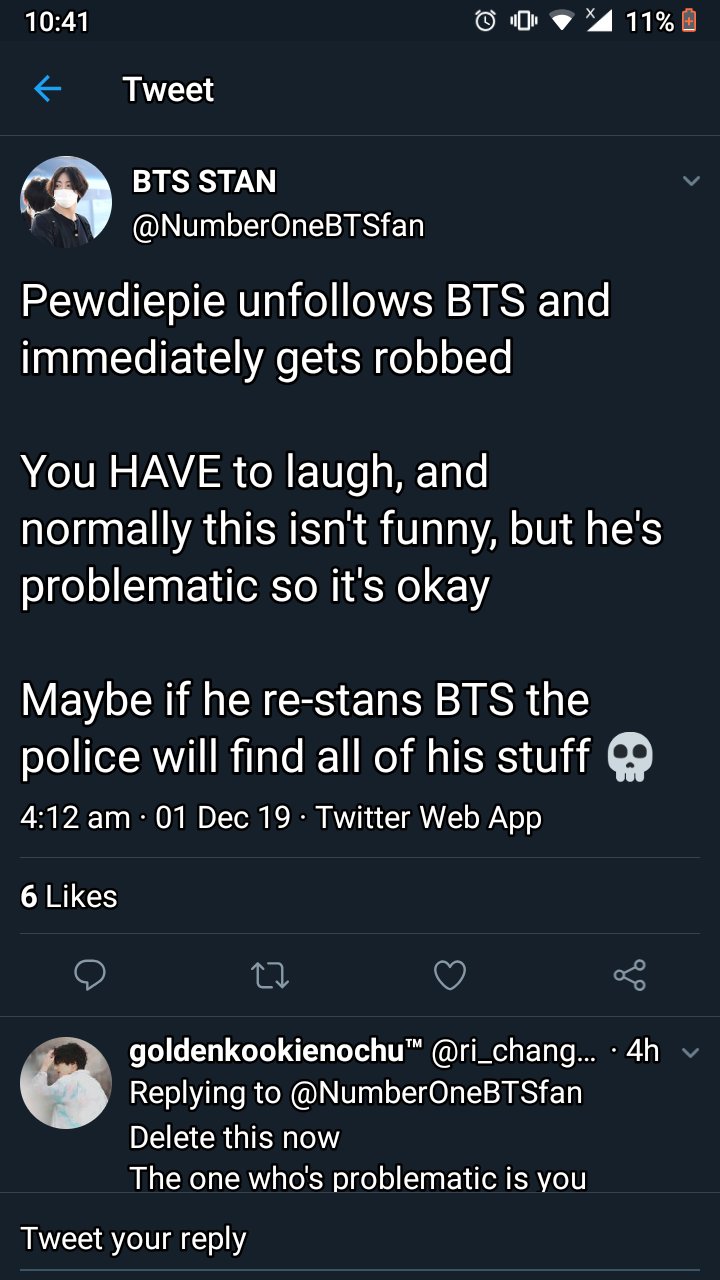 Imagine how sad your life has to be to celebrate that a young woman had her jewelry and valuables stolen?

Some stranger (or strangers) broke into their home and rifled through their personal possessions searching for things that they could steal.

A robbery is a terrifying thing and there are real feelings of being violated even if you weren’t present at the time.

But there are literally millions of people that love PewDiePie and Mariza.

Kjellberg had to post a video some years ago to tell his fans not to come to his house.

Personally, I don’t think that he’s a bad guy. He’s encouraging his followers to read. He’s supported charities that he believes in. He’s not one of those flashy celebrities flaunting their cash and fancy cars. Despite a net worth of somewhere around $30 million, he lives a pretty simple life, all things considered.

He was pressured after the Christchurch shooting to do something to push back against the claims that he’s “alt-right” and he decided to make a donation to the Anti-Defamation League, but well, that just wasn’t him.

Check out his response in the first few minutes of this video:

So, to those folks that are celebrating that PewDiePie was robbed because he’s such a “horrible” person — what exactly does that make you?

I think the answer is clear…