Gender theory is misogyny wrapped in the package of activism that is erasing what defines a woman.

In an online pamphlet produced by the largest LGBT civil rights organization in America, Human Rights Campaign, renamed body parts to be more “inclusive” of the trans community. There’s just one problem — the redefinitions alter words to mean the opposite of what they currently mean. The new “inclusive” names are also incredibly offensive to people who are not transgender.

The pamphlet is designed to be for trans people and their sexual partners to be able to discuss sex and their bodies in a “respectful” manner.

Here’s an idea, how about you just use the gender-neutral term “genitals”?

First, the pamphlet begins with defining what trans, transfeminine, and transmasculine mean. It also defines the word “parts” which actually seems self-explanatory. 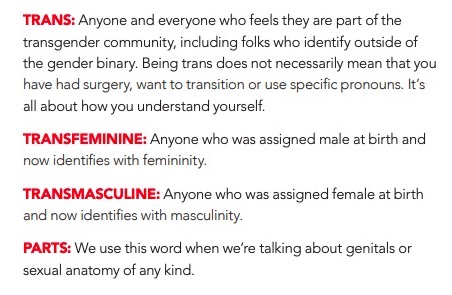 The next part completely redefines what constitutes male and female and essentially denies the existence of biological reality.

Instead of the scientific word for male genitals, they use the colloquial term “dick” and insist that a “dick” can belong to people of all genders because, to proponents of gender theory, gender is not biological, it is self-determined.

The biological term for female genitals has been changed to the demeaning “front hole” which is “sometimes referred to as a vagina” — sometimes?!

A biological man who identifies as a woman but still has male genitalia is said to possess the equally demeaning term “strapless” according to the guide. How insulting to insinuate that the norm is a fake penis and the physical male genitalia is somehow lesser than that.

And here’s where the misogyny is utterly blatant… the genitals of a biological man who has had gender reassignment surgery is now called — a “vagina.”

So, to recap, a biological female has a “front hole,” but a biological man who has had surgery has a “vagina.”

Now, I’m no feminist, but it seems to me that the use of these two terms favors biological men and marginalizes biological women. 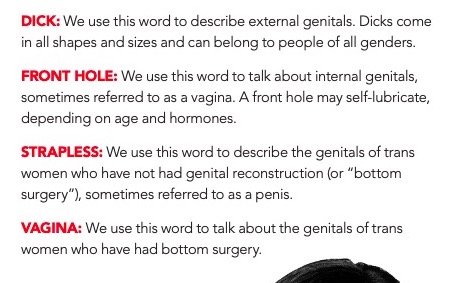 This used to be so basic that even small children understood it:

I understand that they’re attempting to mitigate the feelings of dysphoria that some trans people would feel for having the biological parts that don’t conform to their gender identity.

But these changes to language don’t occur in a vacuum. When biological terms are redefined by those that are transgender, it will inevitably affect those who are not.

It is the height of misogyny to label the genitals of biological men who have had gender reassignment surgery as a “vagina” but the sex organ of a biological woman a “front hole.” The implication here is that gender identity defines both manhood and womanhood.

There is also a move to have transgender women called “women” and biological women “cis-women.” Do you see what is happening here? The marginalization of women on the altar of “wokeness.”

It is also surprising that the redefinition of genitalia to be sensitive to the “T” in LGBT is being pushed by a civil rights organization that also allegedly represents the lesbian, gay, and bisexual portion.

There is a quiet civil war within the LGBT because gender theory essentially negates homosexuality and bisexuality. Transgender women who have not undergone surgery are now calling themselves “lesbians” and saying that having any genital preferences in dating is transphobic. The Guardian got into a whole lot of trouble for setting up a lesbian with a trans woman on a blind date without telling her.

Heterosexuality means that something as does homosexuality. The gender theorists, however, want to remove all distinctions.

This altering of language to change the culture is taking a page right out of George Orwell’s 1984.

It’s so ridiculous that satirist Titania McGrath covered the insanity of the woke identitarianism with a couple of tweets.

I actually covered all of this in my poem “I Am Womxn”, which is included in my book WOKE: A GUIDE TO SOCIAL JUSTICE. https://t.co/bzjNx7X92h pic.twitter.com/XPQWqQpCoE

An Irreverent Look At The Differences Between Christmas And Hanukkah
November 30th, 2021 The Lid