This idiot move should force them to officially change their name to “NewsWeak.”

It’s clear that media organizations have zero sense of humor and at this point cannot even recognize a joke.

Snopes has repeatedly “fact-checked” articles published by The Babylon Bee, a Christian satire site. A (triggered) CNN reporter has also taken shots at The Bee because people find the satirical articles funny and share them on Facebook as much as “legitimate” news sources like CNN and The New York Times.

Speaking of The Times, they “fact-checked” a meme shared by the President back in October. It took two journalists to write the piece. 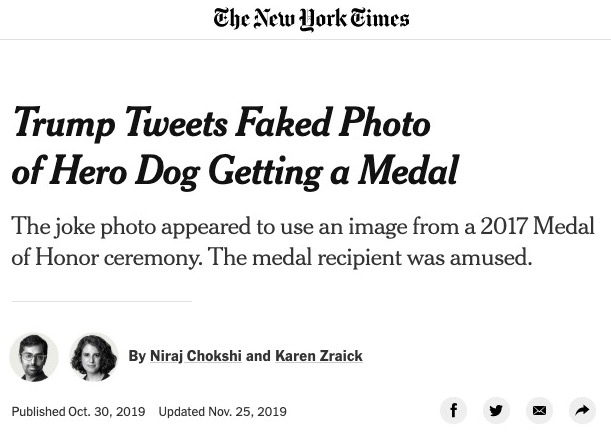 Following the same pattern, Newsweek has also reported a joke made by Fox News host, Greg Gutfeld, as hard-hitting news. Or at least “click-bait” news.

On Wednesday, Gutfeld was commenting about how President Trump has been surprisingly resilient in the face of impeachment, racking up huge accomplishments like the booming economy, signing USMCA into law, and negotiating a workable peace deal in the Middle East. Gutfeld, who describes himself as a satirist and humorist, said that Trump is competitive and thrives on opposition. “You try to bring him down and he just does more. If you keep at this, he’ll probably cure the Coronavirus and make China pay for it,” joked Gutfeld to the chuckles of his co-hosts.

Watch Gutfeld’s opening monologue on Wednesday’s edition of The Five:

Aaaand here’s a live shot of the geniuses over at Newsweek:

Which resulted in this:

Fox News' Greg Gutfeld claims Trump's impeachment has made him more "effective," says he could "probably cure the coronavirus" https://t.co/4IF1S60lHF

Here’s the ClashDaily newsroom reaction to Newsweek‘s article and tweet:

Apparently it’s the same reaction that Gutfeld himself had. In an email to The Washington Free Beacon Gutfeld said that it was clearly an attempt at clickbait by Newsweek.

“We live in a time where it pays for some sites to treat jokes seriously, or else they wouldn’t have a story to write. There’s no story in ‘Greg told a joke,’ but there is one if you take a joke literally,” Gutfeld told the Washington Free Beacon in an email.

Gutfeld, a self-described satirist and humorist, frequently peppers his commentary with jokes that are not intended to be taken seriously. In the same monologue, he compared the media to “the bitter ex-spouse whispering bad things to the kids about the other parent” and “a T-shirt cannon, [they] can shoot those messages to you at home and call it an honest day’s work.”