MSNBC has been explicitly partisan for a long time. But this is bad even by their conspiracy-loving low standards.

Trump just greased Suleimani and sent him off to meet his 71 Virginians. (Robin Williams joke, look it up if you want a good laugh.)

He’s dead and the world’s a better place for his leaving it. Right up there with Jeffrey Epstein. But the Left simply cannot help themselves. They are so deeply partisan they will unthinkingly side WITH anyone and anything that Trump is AGAINST. Even terrorists personally responsible for the deaths of untold thousands.

They WANT to believe that Trump’s leading us all into World War III. But, of course, he is not.

How badly do they want to ‘OWN’ Trump at MSNBC? So badly that they will gladly lie to do it.

No, we’re not talking about the thoroughly-debunked Russian Collusion story they hung their hat on for a couple of years. Nor are we talking about ‘Roswell’ Rachell Maddow’s super-important overhyped ‘big scoop’ about Trump’s tax returns that showed a single page of his taxes from forever ago.

They’ve moved so VERY far beyond that. They are now reading out the talking points of the World’s Largest State Sponsor of Terrorism™ on the air.

While he did say this was “not confirmed”, it is pretty irresponsible for MSNBC to suggest that there were 30 U.S. casualties in today’s attack by Iran. pic.twitter.com/3xKI0Xzm6R

Do you think anyone noticed?

MSNBC pushed Iranian propaganda tonight by reporting that Iran killed 30 Americans tonight even though the Pentagon said that that was a lie and that no Americans were killed.

Fake News is the enemy of the people!

It wasn’t just them, either.

15. This video was shot in Qatar in May, not in Iraq tonight. Souce: https://t.co/rbcoFcO6f8 pic.twitter.com/Ywz6kWl3BA

Well, At least MSNBC wasn’t retweeted by Iran. That ‘honor’ was reserved for CNN.

Is it possible that more viewers in saw Anderson Cooper report this in IRAN than in the US of A?

Here is the official report:

And the rest of that thread: 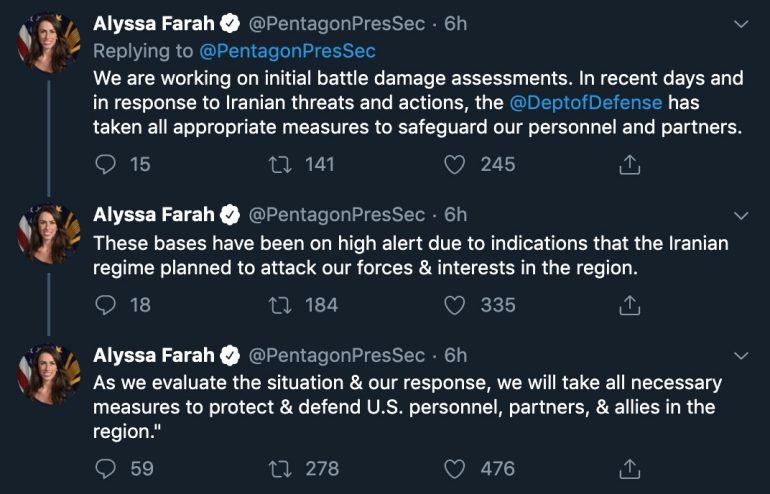 You may notice that there were ZERO official reports of casualties so far.

What did the President have to say?

All is well! Missiles launched from Iran at two military bases located in Iraq. Assessment of casualties & damages taking place now. So far, so good! We have the most powerful and well equipped military anywhere in the world, by far! I will be making a statement tomorrow morning.

For all the claims that he’s going to ‘blunder us’ into war, he hasn’t done so yet. And this is what, the second or third time they’ve clutched thier pearls about WWIII?