Gee, why would ANYONE possibly believe that someone in the Resistance would be more interested in damaging Trump than in representing the national interest?

Congress was given the briefing about greasing Soleimani they were owed for oversight purposes. But information about ‘methods and sources’ was being held back.

WHY was it held back?

They were held back for the very reason the Dems keep using in their fingerpointing about Trump. ‘National Security’.

Were Dems unfairly kept out of the loop? Nope. Not all of them.

The just reacted to THAT phone call the very same way Democrats have been known to respond when they get that ‘3 Am phone call‘ Hillary spoke about in her now-infamous ad.

Politico reported that Pelosi’s response to an aide who told her that Pence was on the phone was, “Tell him I’ll call him back.” — Source: KTRH Houston

It’s unclear whether she ever actually returned that call.

What was Pelosi doing? She was busy at the opening of some fancy-pants new DC restaurant around that time.

But in the briefing AFTER the fact, we learn the following:

In classified briefing, it appeared defense & intelligence reps held back info out of concern too many Congressmen can't be trusted to keep classified info from USA enemies.

Some Members of Congress… 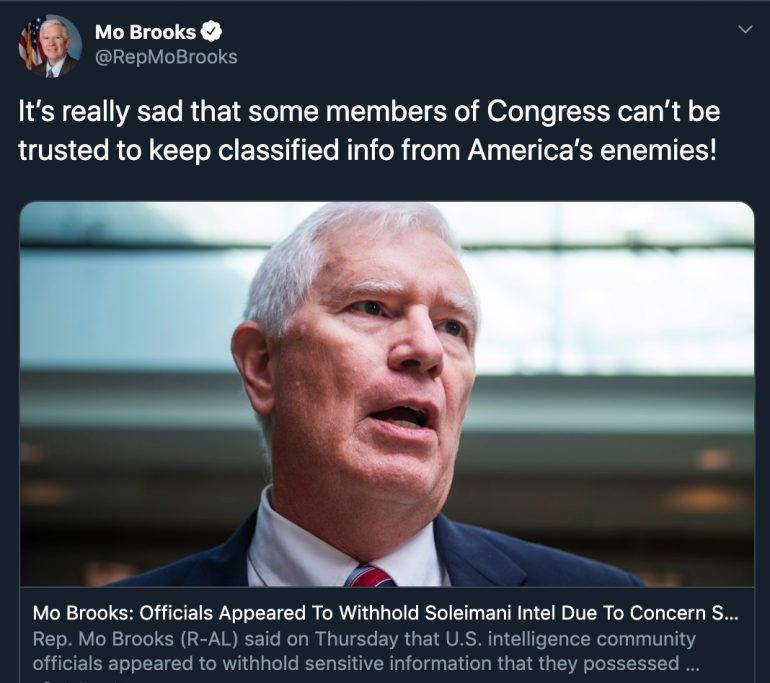 Who could they POSSIBLY have in mind as ‘untrustworthy’?

Can you think of anyone in the ‘gang of eight’ that might be Schifty enough to leak classified information?

Can you think of any pencil-necks who would stoop to something so low? It’s a total mystery.

How jacked-up are our ‘Representatives’ in DC right now?

GOP .@RepDougCollins says .@SpeakerPelosi & Socialist Dems are "in love with terrorists…. They mourn Soleimani more than they mourn our Gold Star families."

I don't know about that. But I do know Socialist Dems' weak policies aid, abet & enable America's terrorist enemies. pic.twitter.com/BdYjTrawWW

Doug Collins nailed it. DC is THAT jacked up.