The second-largest concentration of Iranians outside of Iran held a “prayer vigil” to mourn the death of a known terrorist.

The largest concentration of Iranians outside of Iran is in Los Angeles, the second-largest is in Toronto, Canada. There are so many Iranians in the Canadian city that it’s been given a charming little nickname — “Tehranto.”

Toronto, or “Tehranto” is as it’s been dubbed by many of the approximately 100,000 people of Iranian descent living in the city, is home to the second-highest concentration of Iranians outside Iran. Only Los Angeles has a larger Iranian community.

Unlike its counterpart south of the border, which saw some of its biggest influxes of Iranians during and in the lead-up to the Iranian Revolution of 1979, the Toronto Iranian community’s ties to its home country are arguably fresher — in large part because immigration to Canada has been a relatively smoother process than to the United States.

Canada, for example, had an embassy in Iran up until 2012, unlike the United States, which severed diplomatic relations with the country in 1980.

Some of the Iranians in Canada are so broken up by the deaths of Iranian Revolutionary Guard Corps (IRGC) General and Quds Force Leader, Qasem Soleimani, and Abu Mahdi Al-Muhandis, an Iraqi paramilitary chief that died in the same airstrike, that they decided to have a candlelight vigil for those “heroes of Islam.”

A Muslim youth organization, Mahdi Youth Society, which appears to be a pretty normal group from its other tweets, shared the information about the vigil. Once it was picked up by reporters, however, it was quickly deleted. 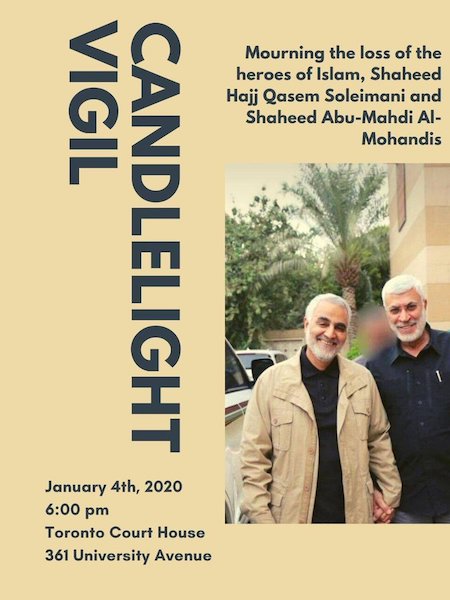 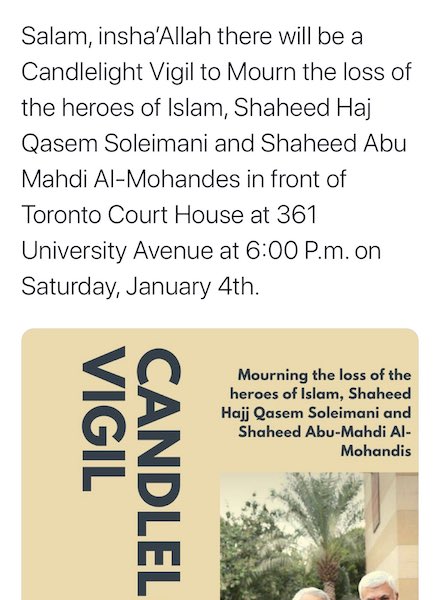 The local news station brought on a Human Rights attorney of Iranian descent to talk about the death of Soleimani and what the feelings are within the Iranian community in Canada.

The death of General Qassem Soleimani is getting mixed reaction from Iranians inside and outside the country.

I speak with human-rights lawyer Kaveh @kshahrooz, senior fellow @MLInstitute, for his analysis and his personal reaction to Soleimani's death. pic.twitter.com/MkIzRL37pj

In another television appearance below, Kaveh Shahrooz says that Soleimani has been designated a terrorist by all democratic including Canada and the U.S. and he personally finds it disgusting that there is a prayer vigil for a known terrorist responsible for the deaths of thousands. He added that anyone who would attend such a vigil is an apologist for the Iranian regime.

The reaction was indeed mixed and came to a head when the candlelight vigil was met with protesters, some of whom were immigrants from Iran.

The couple of hundred mourners lit candles and were carrying enlarged photos of Soleimani and Al-Muhondis. One person held up a hand-written sign that read, “DJ Trump is the real terrorist.” The crowd shouted, “We want peace” along with “Down with USA and Israel” and the ever-present, “Allahu Akbar.”

The anti-Soleimani protesters carried a variety of flags — the Stars and Stripes, the UK flag, the Red Ensign, which was the flag of Canada before the Maple Leaf, and the pre-revolution flag of Iran. Some signs in the smaller crowed included, “Trump 2020” and “This is a vigil 4 terrorists and murderers.” There were even a couple of MAGA hats in the group.

Supporters of Iranian terrorist clash with counter-protestors in downtown Toronto

I hope 2020 will be the year the Trudeau government lives up to its pledge to list the #IRGC as a terrorist entity. This “vigil” in the streets of Toronto is a protest in support of Iranian regime sponsored terror. https://t.co/oTyxRNyVch

The police had to keep the two groups apart as the conflict went from shouting to shoving.

Here is a local news report on the situation:

One Iranian counter-protestor, Nasser Pooli, was irate with Canadian Prime Minister Justin Trudeau and mocked him for praying in a mosque. “We don’t need you to go to Iranian stores, Mr. Trudeau. Clean up this shit. Clean up your mess.” He also accused the pro-Iranian terrorist demonstrators of being paid to hold the vigil.

One journalist for Rebel Media who was trying to question some of the attendees on both sides was told that he was not allowed to call Soleimani a terrorist or he would be arrested for “inciting a breach of the peace.”

Oh, and what would a “prayer vigil” for an Iranian terrorist mastermind be without a Hezbollah flag and a good ol’ “down with USA” and “shame, shame USA” chants while accusing the United States of terrorism?

Hezbollah flag being waved at the pro Iranian terrorist demonstration in Toronto.

Look at all that “cultural enrichment” in the heart of downtown Toronto!

Great work, Canada, on winning over the hearts and minds of people fleeing an authoritarian regime that is the largest state sponsor of terror in the world. Well done.