A “discreet” hookup website for married people is using a photo of the First Lady to promote their brand.

EVEEDA.com, an Ashley Madison-style dating site that promotes “discreet affairs”, has used the photos of Donald and Melania Trump on their promotional billboards.

One London billboard shows Melania looking and smiling at Prime Minister Justin Trudeau at the 2019 G7 Summit with the caption, “Married to one man, but fantasizing about others? You need to try…EVEEDA.com.” 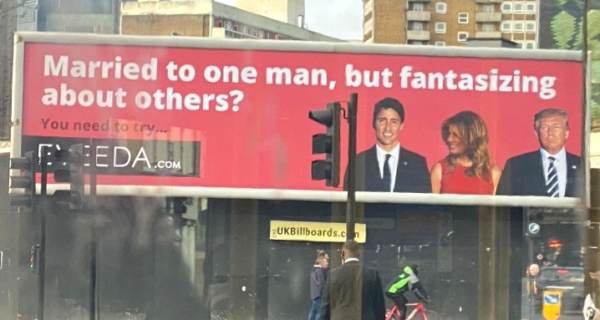 They have also used the same image for a Spanish language ad. 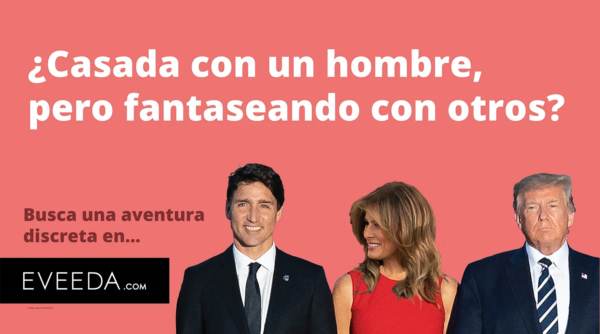 A Reddit user posted a photo of another Eveeda ad in Melbourne which features a photo of the President and First Lady with the caption, “Stuck in your marriage but divorce is not an option? Have a discreet affair at… EVEEDA.com.” 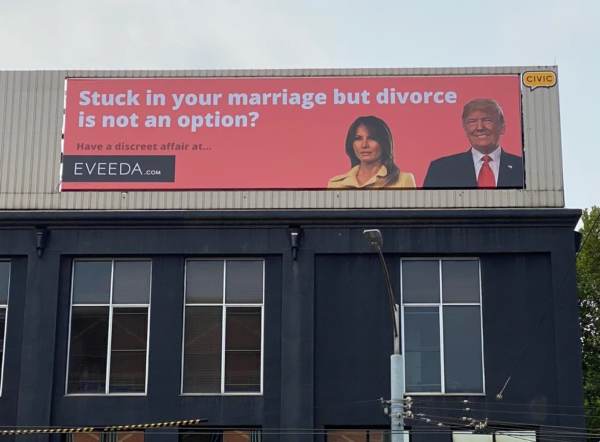 Eveeda’s slogan is, “Created by women. For women. To have discreet affairs.”

Can you imagine the outrage if this had been any other President and First Lady?

The Media(D) went to great lengths to show how happy the Clintons were after the “bimbo eruptions” in the 1990s, and these “sweet moments” were resurrected in 2016 when the Hildebeest was running for President against Donald J. Trump. Most Americans have speculated on the relationship between Bill and Hillary and have (generally) come to the consensus that “Slick Willy” has a bit of a problem keeping things in his pants.

Many on the left have decided to speculate on the state of the marriage between President Trump and Melania, and let’s be real — POTUS doesn’t exactly have a great record for marital fidelity. Sure, that’s a fair criticism. But the left has also targeted Melania with this same brush.

I personally don’t think that Prime Minister Blackface who can’t seem to lisp out a complete sentence unscripted is quite the studmuffin that the left claims that he is. Of course, that’s just my personal opinion.

Prime Minister Groper McHandsy has been given a pass by feminists on his #MeToo moment from nearly two decades ago because he is sufficiently progressive… and presumably “hot.”

They use these photos to mock both the President using his marriage and it’s pretty gross.

Melania is ready to risk it all #Trudeau pic.twitter.com/lEz5sjuQBD

This isn’t the first time that leftists have tried to use the “progressive” Prime Minister of Canada as a heartthrob. HuffPo writer Philip Lewis noted that photogenic Ivanka appeared to be looking at the Trudeau.

Get you someone that looks at you the way Ivanka Trump looks at Justin Trudeau pic.twitter.com/sxTAlpi4av

Daniel Holland’s tweet went viral either despite or because of its silliness.

No one is safe from PM Steal Yo Girl! pic.twitter.com/TYrTV1U4CN

He added to it when after the Melania-Justin kissy photos went viral.

The last one on this thread now.
I hadn't seen the photo's in sequence, you can almost hear him say "Lose the old guy and meet me in 10 minutes" pic.twitter.com/2qS4TGV7nZ

Remember, Trudeau is also married. Photos of the Prime Minister and his wife have also been gushed over by leftists showing how truly in love they are.

So, if this attraction is mutual, are there no questions about JT’s wandering eye, then?

Nah, it’s just ok to use the photos to target the Trumps and give Trudeau another pass.

How about we cherry-pick some other photos, hmm?

Dear Eveeda, here are some samples for your next ad campaign.

There are the photos of Barry and the young, attractive Danish Prime Minister Helle Thorning-Schmidt getting cozy and taking selfies at Nelson Mandela’s memorial service. 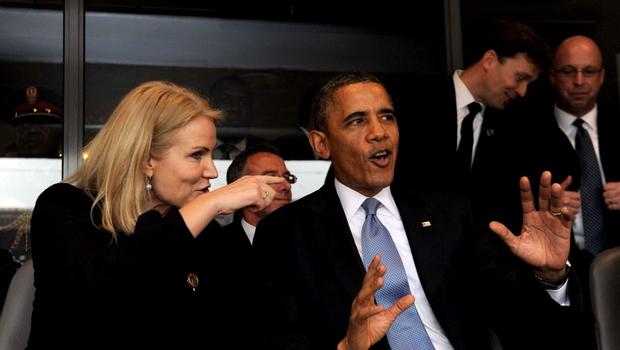 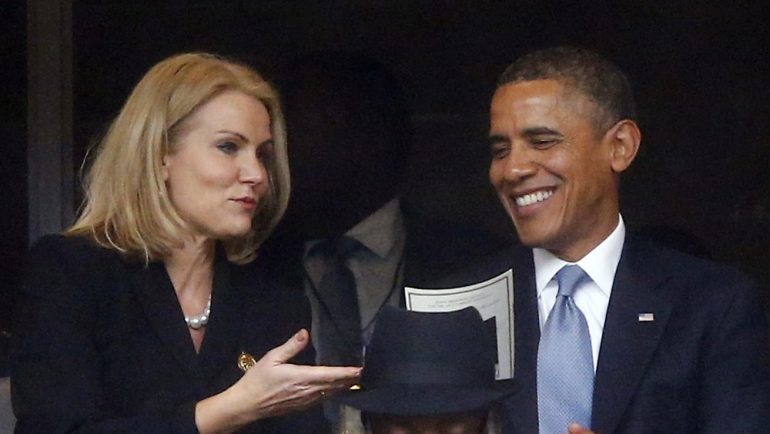 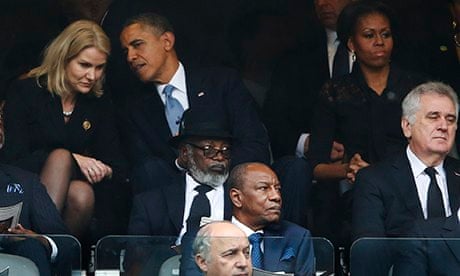 The caption for the above photo could be, “Is his wife an angry, bitter racist? Show him that he has an attractive option.” 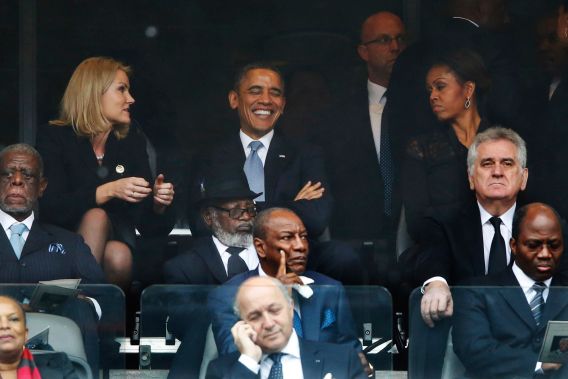 And there was a kiss — presumably, it’s that same double-cheek peck that is customary at international gatherings just like the one with Melania and Justin.

This photo, however, could be misconstrued if Michelle wasn’t hovering so close and was not included in the shot. 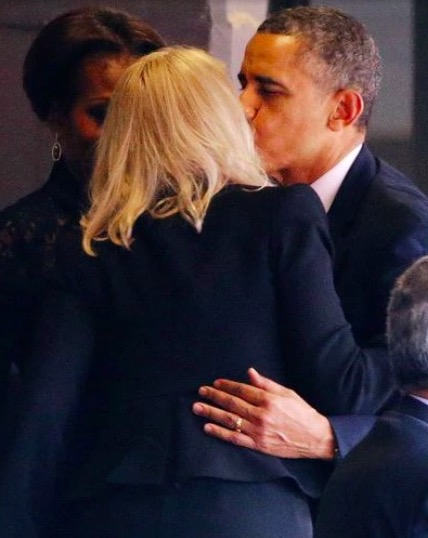 But, since the target is women, how about Michelle and George W. Bush? 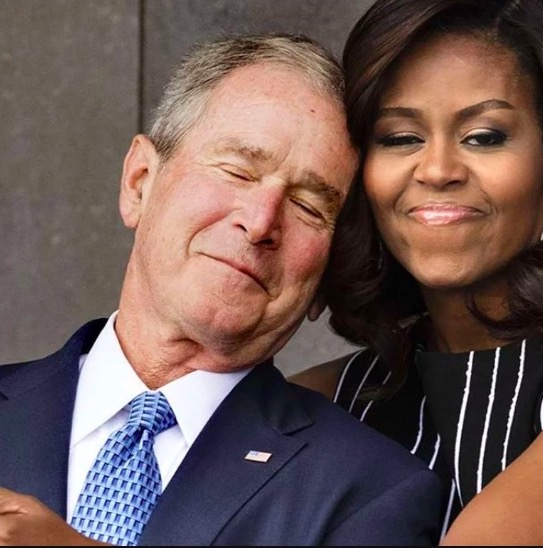 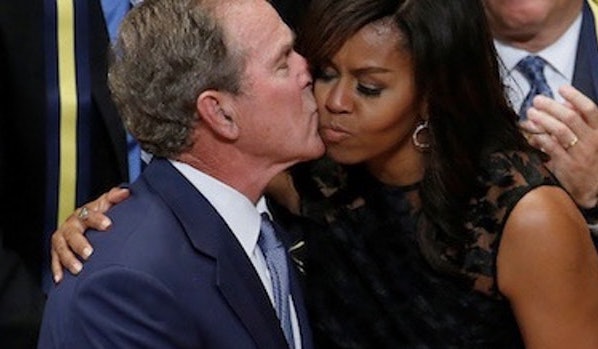 But that will never happen because it’s about all slut-shaming Melania and implying that she would have an affair with pretty-boy Trudeau if given the opportunity.

Some of these leftists are the same people that want to “destigmatize” all sorts of sexual acts including pedophilia, say that monogamy isn’t natural to the human condition, came to the defense of a sitting member of Congress who abused her authority with her employees and roped in a subordinate into a “throuple” relationship and then cheated on her partners with another subordinate. They are the same people that sat on both the Harvey Weinstein and Jeffrey Epstein sex abuse stories while castigating Justice Brett Kavanaugh for false allegations against him, and insist that women view sex in precisely the same way that men do.

But President Trump is the problem.