Protesters are practicing in Canada for a fight they want to bring here. Their major rail corridor has been blockaded over an environmental protest.

The next time someone talks to you about the Green New Deal, tell them about what Canadian protesters have been doing to ruin their country.

It wasn’t enough to deep-six a pipeline that would have taken oil and gas from the source in Western Canada to the major cities and ports in Eastern Canada, they have blockaded rail lines, too.

This has been going on for a while now, and Prime Minister Blackface hasn’t been able to locate his testicles and do something about it… even though these protests are an ILLEGAL blockade of rail, and enforcement is a national responsibility.

Trending: Pelosi Bailed Out The Kennedy Center … What They’ve Done Since Will Have You Swearing

It’s getting pretty bad. Workers are suffering. People are being laid off. Maritime Canada — i.e. North of Maine, could be facing critical shortfalls of propane… in February.

While police sit on their hands, and politicians give platitudes, a couple of bros decided to take action.

Counter-protesters hauling away the blockade and loading it into this truck. #yeg #wetsuweten pic.twitter.com/08HtLB6sHk

One Canadian blue-check gave them one of the best compliments we’ve ever seen on Twitter:

(note — the bros with the Truck did this in Alberta, which is Canada’s approximation of Texas, and north of Montana. So they are the guys that this chick said they didn’t deserve) 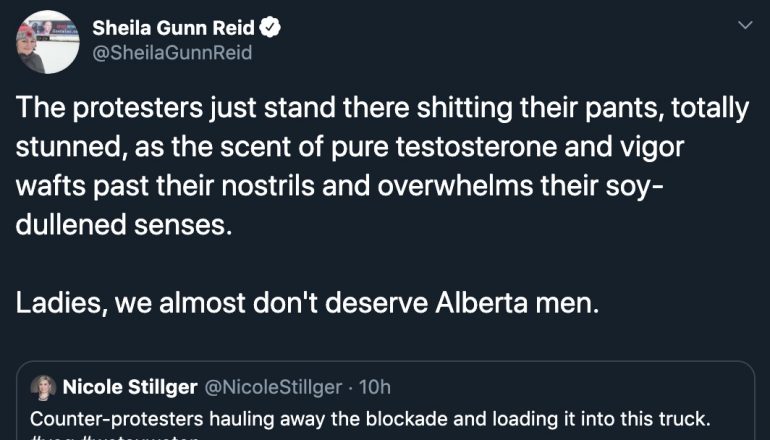 These perpetual complainers don’t know how to respond when a couple of get-er-done men of action show up and take charge.

Never underestimate the difference a little old-fashioned masculine confidence can bring to an otherwise broken situation.

This is exactly the attitude the Left is desperate to breed out of us.

Because that attitude does not back down, does not roll over and die, and isn’t about to be spoon-fed anything it is told to think.

Travelin’ Man The Big Story, And Another Strange Place Spygate Master John Brennan Showed Up In At A Weird Time
March 28th, 2020 The Lid