Does Brazile not remember that she was tipping the scale in Hillary’s favor during the 2016 primary?

Democratic hopeful Michael Bloomberg has been spending millions of dollars hand-over-fist for advertising to gain some momentum before he falls on his face in the debates. He is certainly outspending his fellow Democratic candidates, but he can’t control the news cycle that continues to report on the controversial and out-right bigoted and sexist comments by the former mayor of New York.

Still, he’s paying a ton of cash for his message to get out there via Instagram influencers, terrible meme-makers, and traditional ads.

One ad that he aired took direct aim at Bernie’s supporters rather than the candidate himself. Bernie Bros are notoriously obnoxious to a degree that is unparalleled in political discourse. Some of his organizers have even been vocal supporters of gulags and “re-education camps” for those who resist the “revolution.”

With the angry, vocal Bernie “true believers” many people of all political stripes have brushed up against a rabid Bernie supporter. The ad will resonate in that way.

Here is the ad:

Former DNC Chair Donna Brazile retweeted it with the comment, “#OMG The gloves are off. #Bloomberg 2020 is finally here.”

This is pretty awkward since Brazile leaked debate questions to Hillary’s campaign in 2016 and wrote a tell-all book about how Hillary essentially bought the DNC.

Check it out the ClashDaily article here: 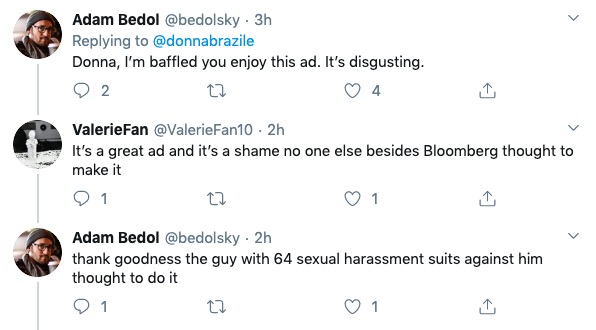 imagine having such a strong campaign that the only flaw opponents can muster is highlighting the negative aspects of some online supporters. #incrediblyweakopponents

It’s true. My own son is a Bernie supporter and it’s impossible to have a civil conversation about politics.

But it was the handful of Twitter users who were quick to remind Brazile of her role in the previous Democratic primary that were absolutely spectacular.

So perfect- you guys were able to find another candidate to buy the Democrat party. Lol.

How much did he pay you and your organisation Donna?

Not one to sound too objective or anything Donna are you. Have you sent him the secret decoder ring yet?

I guess we know who you will endorse.

It’s going to be a tough choice as to who to hand the debate questions to. pic.twitter.com/OxqLBmK6p3

I guess we know who is gonna get the debate questions under the table now.

Are you gonna feed him the debate questions?

What part are YOU playing in the lies and treachery this cycle? After feeding debate questions to Scankles, YOU should never be hired by ANYBODY. You should be driven out of political discourse and penniless when all is said and done. FUCK CHEATERS!

You are going to fuck it up for your side *again*

Man, those have got to sting!

This is why it’s very important to think before you tweet.