With his legacy decimated, former-President Barack Obama is grasping at straws.

This one is a doozie.

Barry has long been trying to claim credit for the jumpstart to the economy after the election of Donald J. Trump. Which is kind of weird because Obama had insisted that slow growth was the “new normal” and we should all just get used to that.

Eleven years ago today, near the bottom of the worst recession in generations, I signed the Recovery Act, paving the way for more than a decade of economic growth and the longest streak of job creation in American history. pic.twitter.com/BmdXrxUAUf

President Trump wasn’t going to let that go by without a reaction — especially on his favorite social media platform.

….ever. Had to rebuild our military, which was totally depleted. Fed Rate UP, taxes and regulations WAY DOWN. If Dems won in 2016, the USA would be in big economic (Depression?) & military trouble right now. THE BEST IS YET TO COME. KEEP AMERICA GREAT!

Barry’s stimulus package wasn’t as successful as he claimed it was. Indeed, it stalled growth that was inevitable after the 2008 financial collapse.

In 2018, Matt Palumbo over at Bongino.com dug into the numbers and shows just how much of the stimulus success was just hype.

It should’ve been a red flag to most observers when the Obama administration began inventing new economic terms to measure the stimulus’ alleged success, such as how many jobs were being “saved or created” by it. Obama told us not long after passing the stimulus that it had created or saved 150,000 jobs in June, and would save or create another 600,000 by September. How the heck does one measure a “saved” job? Simple, create a baseline prediction (for example: predict the economy will lose a million jobs next month), and then if the economy were to only lose 200,000 jobs, Obama could claim he “saved” 800,000 jobs. Convenient, right?

It’s never a vote of confidence when the statistics are being tortured to prove a point, and when measured using conventional (i.e. real) statistics, the stimulus didn’t live up to its own hype.

The Washington Post reported that Obama’s tweet lauding the 2009 stimulus — the $800 billion  American Recovery and Reinvestment Act rankled some feathers.

Conservatives, including prominent commentators and at least two Republican lawmakers, backed Trump and echoed his criticisms of Obama. An October 2019 Washington Post-ABC News poll found that 44 percent of Americans said the economy had improved under Trump. Within that group, about 4 in 5 said Trump deserves at least a good amount of the credit.

“Obama and [former vice president Joe Biden] orchestrated the worst economic recovery in modern history,” McEnany said, later adding: “It’s no wonder Democrats seek to take credit for the Trump economy after eight years of betraying blue collar workers and inflicting pain upon the middle class as Americans everywhere suffered. But the failed days of Democrat stagnation are over, and the soaring Trump economy is here to stay.”

Jobs were gone and Barry said that they just weren’t coming back. It would take a “magic wand” to bring back manufacturing jobs.

Well, we know how that turned out. 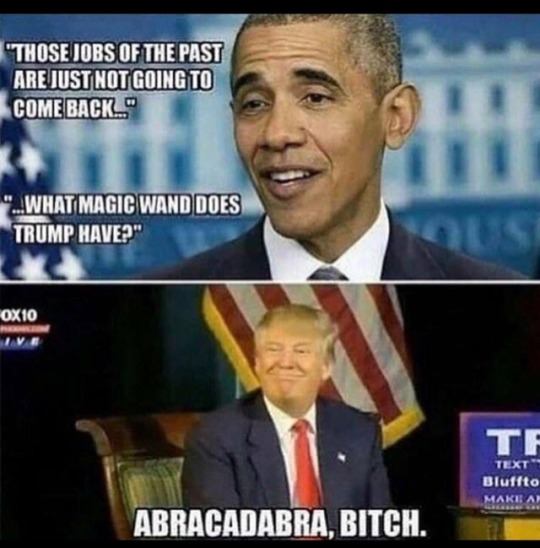 With an economy this good, it's no wonder Barack Obama is trying to take credit.

Amen, brotha! It’s the massive reduction in regulations and a stable hand that knows what the hell he’s doing that has fast-tracked the stalled recovery.

The notion that you did anything but destroy this nation’s economy is beyond hilarious. “Those jobs are never coming back. What’s he going to do, wave a magic wand?” Yes, @realDonaldTrump did exactly that. Your only sad legacy was your blatant lies about ObamaCare. https://t.co/1vCePXZ3tv

Lol at trying to steal credit for the Trump economy.

Actually, you criticized Trump for campaigning on fixing your dead economy. He won and has seen record economic growth as President. Your gig economy and gig in the White House has left no legacy, barely even a memory. https://t.co/jlPHxn1KzL

Weird, I recall you joking about “shovel ready jobs” during a Correspondents Dinner as the stimulus was by then acknowledged as an expensive flop.

But the Democrats are telling me the economy only works for billionaires.

But props to this response right here:

Obama is one of those leftists (like AOC) that have bought into the Keynesian model of economics. But just like socialism, it doesn’t take actual reality into consideration.

Here’s a quick explainer that both Barry and AOC should watch: