Well, this is awkward…

When Senator Bernie Sanders(D-VT) was running against Hillary in the 2016 primary, he was reluctant to mention that he was Jewish.

This could be because he is only comfortable with his ethnic Jewish heritage and not religious Judaism that goes with it.

Bernie’s campaign has decided that pushing his Jewish enthnicity is the right way to go this time around because… Trump.

Democratic presidential candidate Bernie Sanders has released a new campaign video in which he says he is “very proud to be Jewish” and that he looks forward to “becoming the first Jewish president in the history of this country.”

The two minute and 40 second video also blames President Trump for a rise in anti-Semitic incidents and for empowering neo-Nazis in the US It includes footage of Trump saying things that many have interpreted as anti-Semitic, including comments about Jewish money at a Republican Jewish Coalition speech and his statement that Jews who vote for Democrats are “disloyal.”

I'm very proud to be Jewish and I look forward to becoming the first Jewish president in the history of this country. pic.twitter.com/UOPvEomHNE

It’s an interesting move for a campaign that has some seriously anti-Semitic, pro-BDS surrogates like Linda Sarsour and Congresswomen Ilhan Omar(D-MN) and Rashida Tlaib(D-MI). Many of the Bernie Bros online have also voiced support for the blatantly anti-Semitic leader of the UK’s Labour Party, Jeremy Corbin.

Sanders’s new ad lays the blame for the rise in anti-Semitism at the feet of Trump and the white supremacists he supposedly emboldens. There is indeed a rise in anti-Semitism but it’s coming from certain factions on the left that promotes the BDS movement as well as the establishment of Palestine as a one-state solution to the turmoil in the Middle East which completely dismisses the nationhood of Isreal. However, President Trump seems to be quite well-loved in Israel especially after moving the U.S. embassy to Jerusalem.

Just a few days ago, a video of Linda Sarsour was being spread on social media saying that it was wrong for Muslims to “humanize the oppressor” ie. Israelis.

Zahr is just as charming as Sarsour.

The Reagan Battalion tweeted out that there is one more of Bernie’s surrogates that has quite a history of anti-Semitism. Amer Zahr was tapped as a Bernie surrogate in October despite his *ahem* problematic history.

.@BernieSanders just appointed one of the most vicious antisemites in this country as his surrogate.

Yes, we know that most of the ‘reporters’ who cared so much about antisemitism back in 2016 won’t say a word, but we still think that you should know about it. https://t.co/xli7400UDj pic.twitter.com/21DOohyHCr

Zahr’s posts in the above tweet can be seen here: 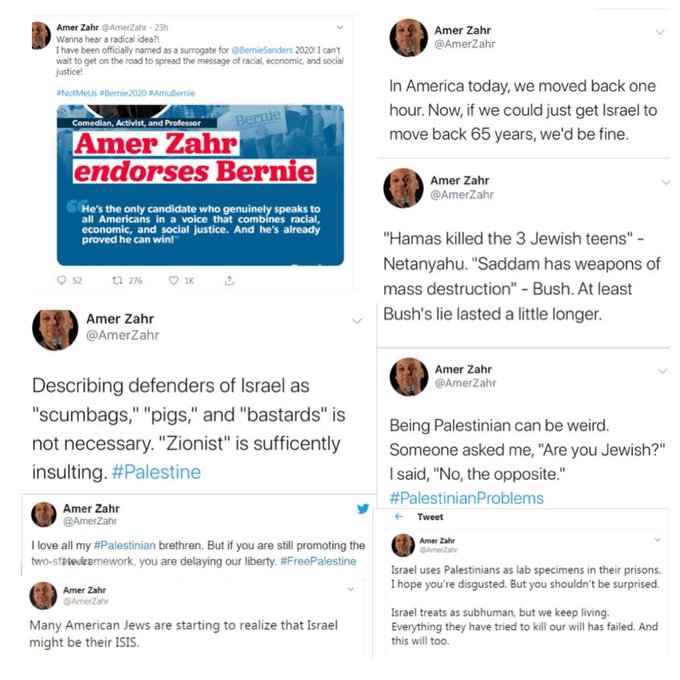 In October, the Washington Free Beacon noted that this might be a real problem for Bernie.

The selection of Zahr is likely to raise eyebrows in the American Jewish community in light of his open support for the BDS movement and a series of tweets accusing Israel of stealing its land from the Palestinians.

Zahr also has expressed support for Palestinian activist Zahra Billoo, who was recently asked to resign from the Women’s March board for a series of anti-Semitic tweets, including one condoning Hamas’s terror attacks on Israel…

…Sanders, who has himself backed far-left anti-Israel groups advocating BDS, has a history of hiring individuals who have accused Jews of having “dual allegiance” to Israel—an age-old anti-Semitic canard—and who have engaged in vulgar screeds against Israel’s prime minister.

Zahr has repeatedly accused Israel of stealing land from the Palestinian people.

Amer Zahr doesn’t just reserve his hateful attitude for the nation of Israel, he spews of that same animosity towards President Trump and Trump supporters.

Yesterday, a crowd of angry white people in North Carolina rallied around a speaker, chanting “Send her back” about a Black American woman.

This guy is just awful!

This is quite the contrast to Bernie’s new “I’m Proud To Be Jewish” ad campaign.

How the heck is he going to reconcile it? Lemme guess… call critics anti-Semites?