The fact that he calls himself a Socialist isn’t even the most newsworthy detail about this expose. It’s what he’s saying about the network itself.

Project Veritas has released a ‘teaser’ about a video that will drop tomorrow.

Their latest undercover work is talking about what’s really going on in ABC.

Part of the interview included thoughts on just how committed they are to releasing stories of real interest to the public or spiking them if they don’t tell the ‘right’ narrative.

You might recall how worked up this same network was when Project Veritas exposed a story about ABC knowing about Epstein but refusing to run the confirmed story they had on him.

Rather than take action about that, they went about colluding with a rival network to get an innocent patsy fired. — ABC Continues Hunt For Amy Robach ‘Leaker’ After Getting Young Woman Fired From CBS

Here’s David Wright in his own words…

So… what’s new this time? Here are some key takeaways:

— When asked if he’s a Democratic Socialist, he said ‘I consider myself a socialist’.

— ‘the voters are poorly informed’

— ‘our bosses don’t see an upside in doing the job we’re supposed to do, which is to speak truth to power and hold people to account’

— (in context of an erroneous story about all of Kobe’s daughters being part of the crash, and a guy getting suspended for it) — ‘Fake News abounds, there are problems with the truth these days’

— We don’t hold him to account. We also don’t give him credit for the things he DOES do

–It became a profit center

–‘you can’t watch Good Morining America without there being a Disney Princess or a Marvel Avenger appearing.’

How well are they able to balance those competing agendas of commercial profit and reporting?

— ‘The commercial imperative is incompatible with news’

— I don’t think we’re terribly interested in the voters

Is this attitude unique to ABC?

— ‘We’re all guilty of the same thing. I think that all these big news organizations, again I’m speaking about broadcast television ABC, CBS, NBC. And we recognize that we are dinosaurs, and we’re in danger of dying. We’re not disciplined enough to cut (Trump) off, and we second-guess ourselves. Because we’re sensitive to the accusation that, you know, we’re in the tank for the Democrats.’

There’s already been fallout from this interview.

Suspended for being honest:

“David Wright has been suspended, and to avoid any possible appearance of bias, he will be reassigned away from political coverage when he returns.” – ABC NEWS. https://t.co/sEgKHCSbIL

Is ABC News going to suspend half their news division? (most journalists say these things in private) or just the ones caught saying these things?

We commend him for his honesty. We do wish they’d say these things publicly, on the air. https://t.co/p9qnZJRIeR

Here come the defenders of the establishment status quo…

Charles Seife, journalism professor @nyuniversity . Pray tell what is unethical about our tactics for getting people to open up. We simply report, with precision, what the public has a right to know the person said. Thread below on this. 1/4 @cgseife @farhip https://t.co/CtorV8bPRy 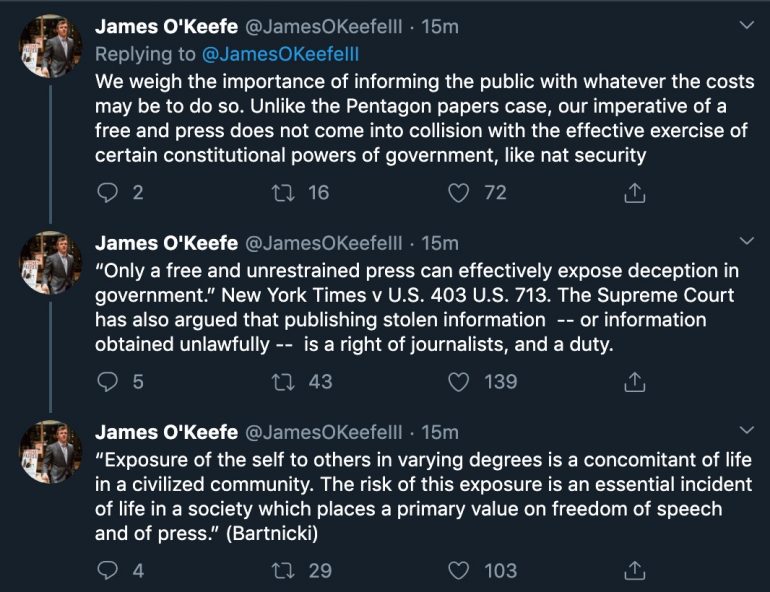 It’s ‘damaging’ by reporting what subjects says in THEIR OWN WORDS.

Isn’t that the duty of a journalist, @cgseif of NYU JOURNALISM SCHOOL?

Are your students only taught to use or not use quotes depending on whether those quotes are “damaging?’

Does TRUTH come in the equation? https://t.co/Z8eSOpbKIG

‘It Stayed In The System’ — Was The Wrong Employee Fired For Leaking Robach’s ‘Hot Mic’ Epstein Rant?