Sometimes, a couple of short sentences can drive a point home more effectively than an entire course or book.

This tweet is a perfect example. It unintentionally unwinds the popular lie that socialism is some kind of a moral good.

There has been a groundswell of interest in Socialism among today’s youth. They never grew up under the shadow of the Cold War. They don’t have the natural antipathy many of us had to the Soviet Evil Empire or memories of how untold numbers of people were shot at the Berlin Wall while trying to ESCAPE from East Germany — fleeing to the West.

A new set of ‘woke’ definitions undergirding familiar ideas like ‘justice’ and ‘fair share’ have usurped and replaced the traditional ones that came before. This is as intentional as it is Orwellian.

This is how they intend to corrode and corrupt culture until it becomes a blank slate they can project their own vision of the future onto.

One of the targets they have been attacking is the Free Market economy. Workers are mistreated, while fatcats make out like bandits unfairly, and disproportionately profiting off the work of others.

In the new logic, if you’re a successful business owner, that is not a sign of virtue, of financial prudence, of business acumen or expertise. Nor is it conceivable that you have helped anyone other than yourself, it is a sign that you are an oppressor of some sort, exploiting the work of others for your own benefit.

They are incapable of seeing virtue in this exchange because they are unwilling to see it through that paradigm.

But here is one tweet that sums up EXACTLY why the free market is good and virtuous… no matter how loudly the Socialists denounce it.

Better still, the tweet wasn’t even intended as political. It was just an update on something that was happening in his life.

Here’s a screencap of the tweet as resent by yours truly with an observation: 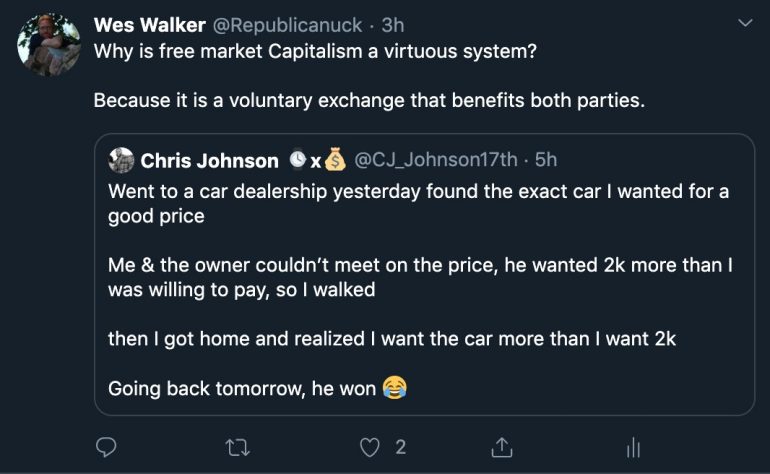 This isn’t a situation where there was a winner and a loser.

On the dealer side, it was already a ‘good price’. The dealer was free to cut the price even lower — losing profit margin, and perhaps the ability to make a living in the process — but he held his ground at what he considered a fair price.

It cost him a sale. Or at least, it seemed to.

Nobody screwed anybody over.

(Well, nobody got screwed over until it came time to pay the taxes, anyway.)