The thing is, President Donald Trump has repeatedly condemned racism and white supremacy, but somehow, Sleepy Joe has missed that.

Of course, he’s not alone. Many people have missed it. For some reason, that message gets buried in the news. It’s a complete mystery how that doesn’t seem to get any coverage.

So, President Trump uses Twitter to get the message out that he’s not a fan of racism of any kind.

The riots in Charlottesville a year ago resulted in senseless death and division. We must come together as a nation. I condemn all types of racism and acts of violence. Peace to ALL Americans!

Even when the Media(D) is forced to cover it, it still gets ignored or buried.

Here are just a handful of headlines from CNBC, WaPo, and The New York Times. 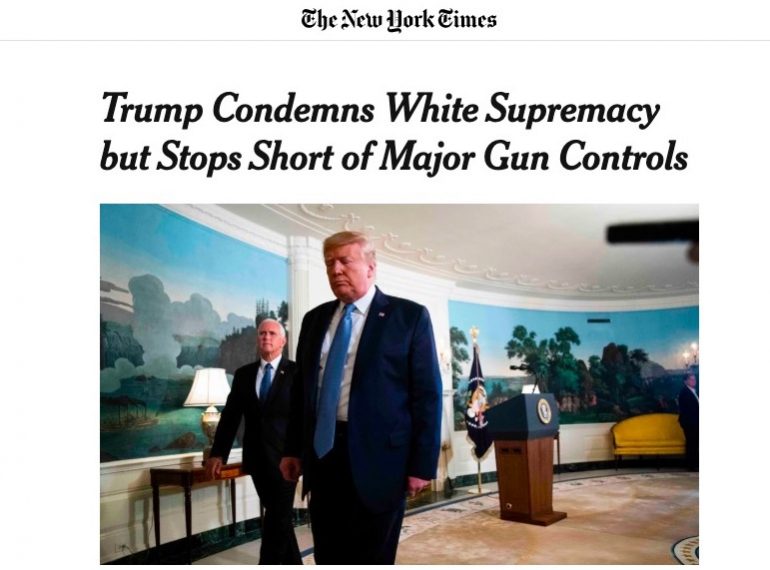 Those are headlines, that’s easy to ignore. If only there was video evidence of President Trump in his own words denouncing and disavowing white nationalists, neo-nazis, the KKK, and David Duke for 17 years.

President Trump has disavowed David Duke, white supremacy and the KKK for 17 YEARS!

The mainstream media has been LYING to you all. pic.twitter.com/3wQHtPRp0I

Oh, sure. That’s 17 years of clips. But how about since he has become President?

During the presser in August 2017 about the conflict in Charlottesville, the comments that President Trump has made are always cut off right before he says that he condemns neo-nazis and white supremacists:

Two days later, Trump condemned racism including the KKK, neo-nazis, and white supremacists. He called racists “repugnant to everything we hold dear as Americans” and said, “We are a nation founded on the truth that all of us are created equal. We are equal in the eyes of our Creator, we are equal under the law, and we are equal under our Constitution. Those who spread violence in the name of bigotry strike at the very core of America.” He then spoke about the tragic death of Heather Heyer who was hit by a car when a white supremacist drove into a crowd of protesters wanting the statue of Robert E. Lee removed.

And he’s kept doing it.

But don’t expect the Left to accept that. It would completely annihilate their narrative that Donald J. Trump is a virulent racist that needs to be defeated or he will destroy the country with his hate.

So, when you look at Biden and the Left’s refusal to accept the President’s statements denouncing racists while insisting that Trump is a racist — or at the very least stoking racism — who is it that’s really being divisive?