Lesson learned: All the money in the world can’t buy you the charisma you need to win a Presidential nomination.

Bloomberg took an unusual strategy that had never worked before… bypassing the ‘little’ caucuses entirely and heading directly to the big show on Super Tuesday.

Super Tuesday was supposed to be Bloomberg’s grand entrance onto the political stage, where his more-than-one-half-billion dollars would catapult him into a status of Real Presidential Contender™.

His money was supposed to make up for his lack of campaigning.

[Narrator: It did not make up for his lack of campaigning.]

Bloomberg is dropping out. And Trump is crowing about it.

The biggest loser tonight, by far, is Mini Mike Bloomberg. His “political” consultants took him for a ride. $700 million washed down the drain, and he got nothing for it but the nickname Mini Mike, and the complete destruction of his reputation. Way to go Mike!

“I’m a believer in using data to inform decisions,” he said in a statement. “After yesterday’s results, the delegate math has become virtually impossible – and a viable path to the nomination no longer exists.”

“I’ve always believed that defeating Donald Trump starts with uniting behind the candidate with the best shot to do it,” he said. “After yesterday’s vote, it is clear that candidate is my friend and a great American, Joe Biden.

Bloomberg had faced increasing pressure to get out of the race after Joe Biden won South Carolina by a commanding margin, emerging as the favorite moderate candidate to take on frontrunner Bernie Sanders. — Buzzfeed

For perspective, as of Wednesday morning, the delegate count is:

(Estimates are that Bloomberg blew about $16M on each of those 44 delegates. That’s some really amazing ROI you’ve got there, Mike!)

What’s more, Warren’s campaign just announced that she, too, is ‘reassessing’ her campaign.

Where does this leave us?

It leaves us with Biden and Sanders duking it out for the nom, while the DNC works REALLY hard to pretend that Tulsi isn’t still standing there trying to be heard. And she isn’t happy about getting ignored: 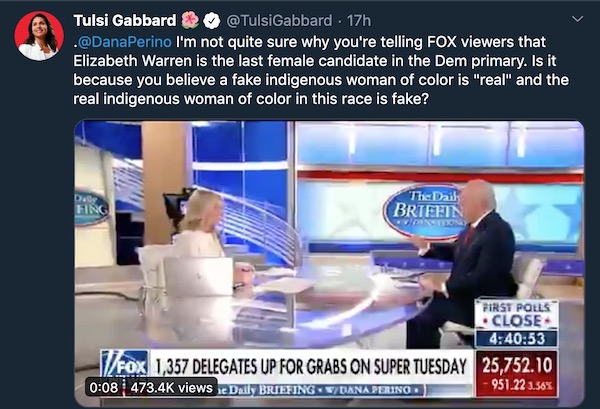 Meanwhile, at the DNC:

It now seems DNC will raise qualification threshold, now that @TulsiGabbard has a delegate, to keep her off the debate stage.

There's only one word for this: rigged.https://t.co/0Hv01GZi8E

So, to sum up, the DNC and their media accomplices are promoting a couple of white guys too old to be properly called ‘Boomers’ while ‘erasing’ the campaign of a legitimately strong, independent-minded woman of color who isn’t just a racial minority, but also a religious minority. We might add (considering how starry-eyed the media was about Peter Pander and ‘Lieutenant Colonel Vindman please’ past military service) that Tulsi isn’t just a veteran, but she is also actively serving.

Of course, that won’t stop them from leveling accusations of someone ELSE being woman-hating bigots. Because they have exactly zero self-awareness.