The 56-year old California lawyer isn’t backing down on what he said, either.

Scott McMillan, who describes himself as a John F. Kennedy-style Democrat, responded to a March 22 all-caps Trump tweet that read, “WE CANNOT LET THE CURE BE WORSE THAN THE PROBLEM ITSELF. AT THE END OF THE 15 DAY PERIOD, WE WILL MAKE A DECISION AS TO WHICH WAY WE WANT TO GO!”

WE CANNOT LET THE CURE BE WORSE THAN THE PROBLEM ITSELF. AT THE END OF THE 15 DAY PERIOD, WE WILL MAKE A DECISION AS TO WHICH WAY WE WANT TO GO!

McMillan wholeheartedly agreed in a very controversial tweet that he has since deleted.

He wrote, “The fundamental problem is whether we are going to tank the entire economy to save 2.5% of the population which is (1) generally expensive to maintain, and (2) not productive.”

Ok, so maybe the way that he worded that seems a wee bit callous. But he’s basically doing what we need to do; ask the hard questions. Everything we do is a balance of risk, isn’t it? Think about how life would change for everyone if we removed all risks in order to save every life–we fly in planes, drive, eat at restaurants, have electrical wires in our homes, and we’d shut down the economy every flu season. That’s not what happens, though, does it? That’s kind of what McMillan’s tweet is pointing out, albeit in a bit of a heartless way by saying that the elderly are “expensive” and “unproductive.”

Still, the idea behind the tweet–what level of risk of infection is acceptable–is the thing that needs to be discussed right now. Do we wait until the chance of spreading the virus is zero? How long will that take? Will that ever happen? What happens to businesses while we wait? How does the government continue to pay people to stay home when they’re not taking in tax revenue? These are legitimate questions.

He followed up his original tweet with another, “Friend, we must face the virus. Sooner or later. Some will delay it, some will live, some will die, all will eventually get it unless there is a vaccine. I’m not one to wait around to rely on anyone to take care of me or my business, including the Government or Big Daddy.”

His tweets immediately sparked outrage and other Twitter users who were calling him a “ghoul” for his tweet were exposing themselves as monsters.

Other Twitter users quickly jumped his words branding him a ‘ghoul’, a ‘Nazi’, a ‘liberal’, a ‘right-wing nut’ and everything in between.

Within the first 48 hours after Sunday’s tweet, he had received nine death threats.

‘If Scott wants to get rid of “useless” people he can go kill himself,’ one such attack read.

‘You, your family and friends go back to work first and let us know about it later,’ wrote another.

‘It’s only courageous if one sacrifices oneself’ a Twitter user hit out, while another said McMillan’s words were ‘spoken like a true sociopath’.

McMillan became suddenly famous simply for responding to a tweet.

Marc Fisher, a Senior Editor at the Washington Post, was so outraged by McMillan’s tweet that he called his parents. 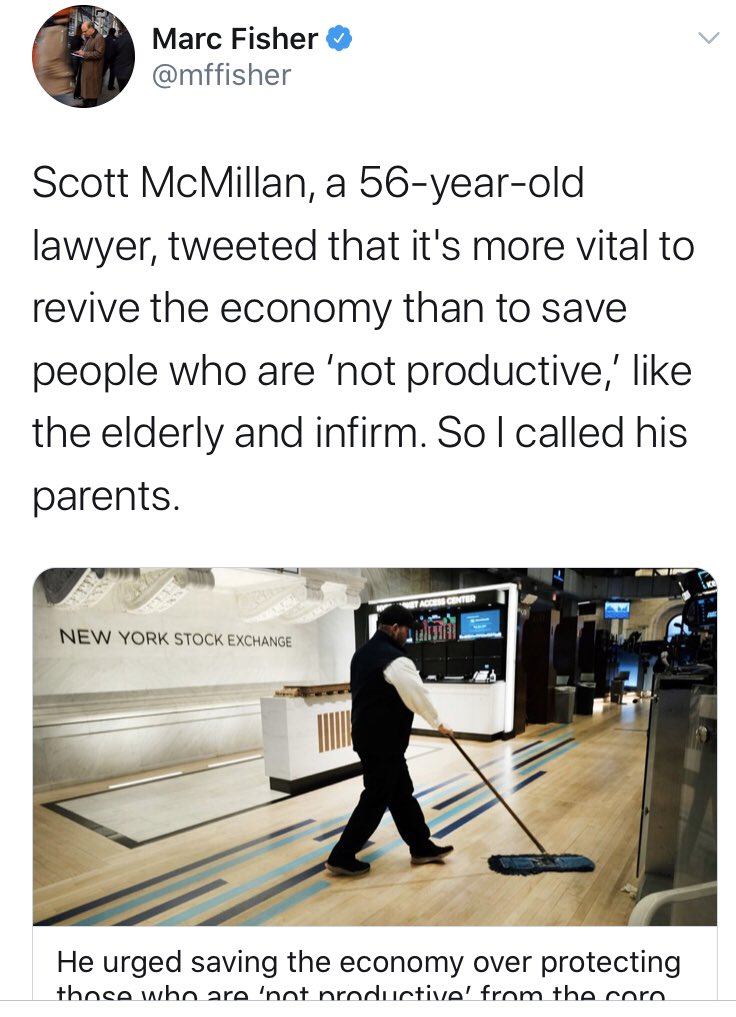 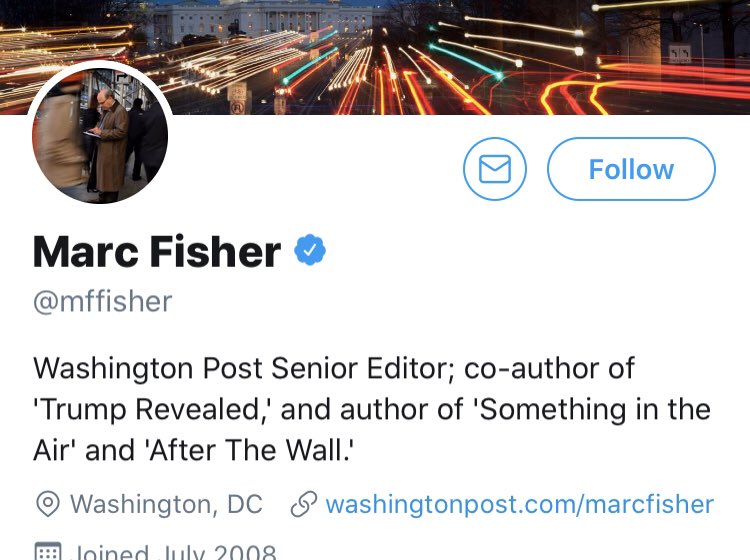 Stop and think about that for a second. The 62-year old Senior Editor of a national newspaper called the parents of a 56-year old man because he didn’t like his tweet.

What a shock for Fisher when he made the tattling phone call to find that McMillan’s parents Jim, 78, and Gloria, 75, agreed with their son’s comments.

‘I have maybe 10 more years to live,’ his father Jim said.

‘We shouldn’t sacrifice the economy to save the elderly. We’re on the short list anyway. To screw up my grandchildren’s future over this, what’s the point of that? Why be selfish?’

‘It could sound a little harsh to people, but what he wrote is an accurate description,’ mom Gloria added.

‘Most people 75 and over have slowed down. We don’t have to go out. And the economy has to be rescued.’

In the Washington Post piece, McMillan said, “I am not a coldhearted monster. Nature does this so often–it wipes a bunch of us out.” He added, “I thought I’d have some interesting conversations with people, and maybe have to explain that I’m not an evil psychopath who wants to cull the old people, but nothing like this. In retrospect, it was probably insensitive to say it that way. I know people are really scared, and as an attorney, I know people can’t handle uncertainty. In retrospect, I understand people are in a vulnerable place, even if it is true that we can’t let our supply chain break. Hey, sorry.”

He was asked why he deleted the tweet and responded, “I deleted the tweet when it became apparent that I had struck a raw nerve and I might need to defend myself in light of death threats. The alt-left Progressives were working themselves into a lather.”

McMillan is astounded at the backlash he’s received, and how leftists have rallied together against him. The awful Rick Wilson, who recently mocked Trump supporters on Don Lemon’s show, was apparently leading the charge. 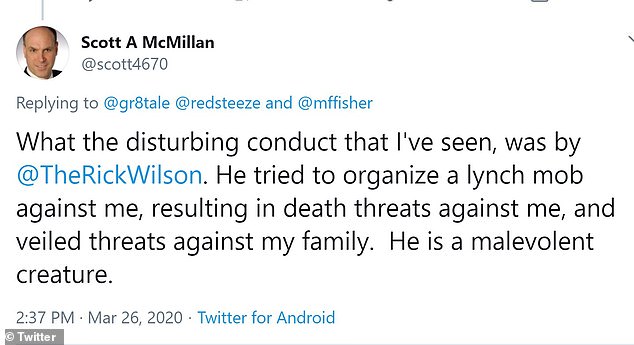 McMillan isn’t backing down on his comments even weighing in on possible COVID-19 treatment.

He later said that what he tweeted was the same balancing measure that politicians are having with the experts right now.

Check out our ClashDaily article on Italy making those decisions here:

He then dropped another truth-bomb that is sure to get the left’s ire. 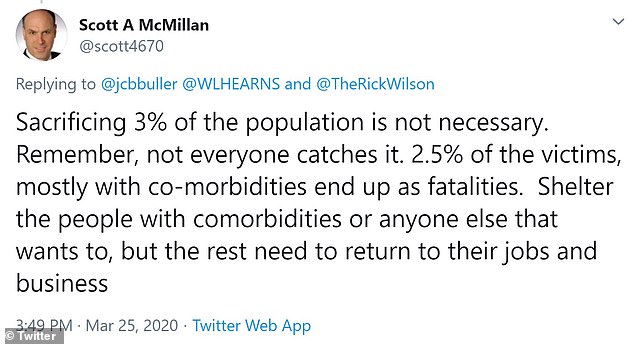 It looks like Jim and Gloria should expect another phone call from another Senior Editor from a national newspaper.