Much to the outrage of the Secular Left this may be one of the most traditionally ‘Presidental’ acts a national leader can take in a time of crisis.

Who would have guessed that Trump — whose personal life is so often held up in an attempt to embarrass the Evangelicals who voted for him — would lead a national return to religious sentiment?

It came as a surprise to everyone that he took such an interest in Religious topics. He lead an international effort to allow Freedom of Religion, especially in places where minority belief is persecuted, the allowing of prayer to be freely practiced in schools, took a stand as the most aggressively pro-life President EVER, and removed the threat of churches having tax status stripped if they dare to weigh in on any political topic.

Now, in light of the first real national crisis of his tenure, he is doing the most traditionally Presidential thing ever. He’s calling for a National Day of Prayer. 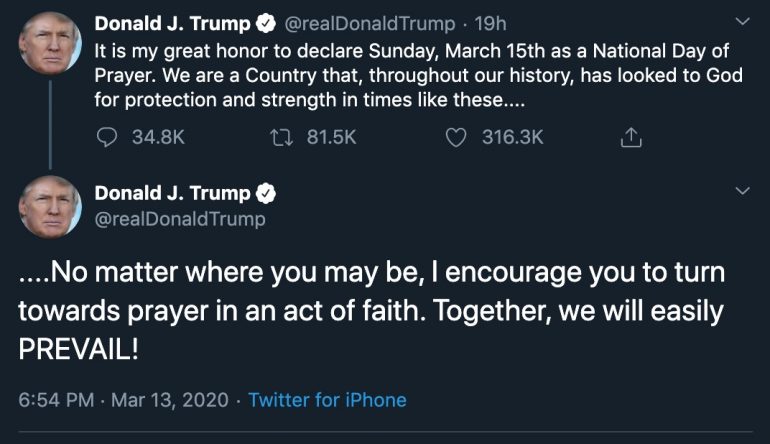 "I hope that we as a nation can use this as an opportunity to pull together for good."

This year’s prayer will likely have a significantly different tone than the Day Of Prayer the President proclaimed last year that was steeped in gratitude.

Lincoln, considered one of the finest Presidents, called for a national day of Prayer and Fasting.

Here is one blogger’s brief recap of some other significant times in American history that leaned into our national instinct to pray.