John Bolton would know. After all, he was the National Security Advisor at the time.

The left suddenly had “strange, new respect” for John Bolton after a portion of his upcoming book leaked in the midst of the Senate Impeachment hearing. In the draft excerpt published by The New York Times, Bolton claimed that President Trump was suspending aid to Ukraine until he received dirt from them on Joe Biden. The Left thought that this was huge and demanded that Bolton be a witness in the Senate hearing.

The Democrats were suddenly able to look past that Bolton was a stalwart Republican and involved in every GOP administration since Reagan, dismissed his history of being hawkish on national security, and generally ignored that he was the walking embodiment of everything that they reviled. They did this because he might have been able to give testimony against Trump.

One tweet just a couple of months later and it was all over.

John Bolton tweeted that the reports that the Trump administration dissolved the NSC biodefense offices are “false and misleading.” He then linked to a Washington Post opinion piece written by Tim Morrison who was the Senior Director for counterproliferation and biodefense for the National Security Council at the time.

Reporting that alleges the Trump Administration dissolved NSC offices related to our biodefense are both false and misleading. Listen to those who ran the effort. This is a must-read for everyone who values truth over politics in a time of crisis. https://t.co/2AAsJMqrm0

Morrison writes that President Trump gets a fair amount of criticism, some of it is warranted, much is not. This unwarranted criticism extends to the Media(D) questioning his response to the Wuhan coronavirus outbreak in December. Morrison notes that the criticism is notably partisan and coming largely from former Obama officials in an election year.

It has been alleged by multiple officials of the Obama administration, including in The Post, that the president and his then-national security adviser, John Bolton, “dissolved the office” at the White House in charge of pandemic preparedness. Because I led the very directorate assigned that mission, the counterproliferation and biodefense office, for a year and then handed it off to another official who still holds the post, I know the charge is specious.

Morrison said that when he joined the National Security Council staff in 2018, he inherited “strong and skilled staff in the counterproliferation and biodefense directorate.” The team of experts accomplished much including the National Biodefense Strategy of 2018, an executive order to modernize influenza vaccines, and coordinated the United States’ response to the Ebola epidemic. Still, there was some bloat in the department.

It is true that the Trump administration has seen fit to shrink the NSC staff. But the bloat that occurred under the previous administration clearly needed a correction. Defense Secretary Robert Gates, congressional oversight committees and members of the Obama administration itself all agreed the NSC was too large and too operationally focused (a departure from its traditional role coordinating executive branch activity). As The Post reported in 2015, from the Clinton administration to the Obama administration’s second term, the NSC’s staff “had quadrupled in size, to nearly 400 people.” That is why Trump began streamlining the NSC staff in 2017.

This was done by consolidating three directorates into one because of the overlap between arms control and nonproliferation, weapons of mass destruction, terrorism, and global health and biodefense. This reorganization is what critics have jumped on and misrepresented. He writes, “If anything, the combined directorate was stronger because related expertise could be commingled.”

The reduction of force in the NSC has continued since I departed the White House. But it has left the biodefense staff unaffected — perhaps a recognition of the importance of that mission to the president, who, after all, in 2018 issued a presidential memorandum to finally create real accountability in the federal government’s expansive biodefense system.

The NSC is really the only place in government where there is a staff that ensures the commander in chief gets all the options he needs to make a decision, and then makes sure that decision is actually implemented. I worry that further reductions at the NSC could impair its capabilities, but the current staffing level is fully up to the job.

Morrison continues by saying that we are “less safe” when public servants are distracted because they’re dragged into politics, Americans are “recklessly scared into doubting the competence of their government to keep them safe, secure and healthy” and when we focus on political gamesmanship instead of the real issues.

For example, we should be united behind ensuring that, in a future congressional appropriations package, U.S. companies are encouraged to return to our shores from China the production of everything from medical face masks and personal protective equipment to vitamin C and penicillin.

And we should be united in demanding to know why the Chinese Communist Party (CCP) was aware of the coronavirus outbreak in Wuhan early in December, maybe even November, and didn’t tell the rest of the world, when stopping the deadly spread might have been possible.

He then blasts the Media(D) for banging the drum on “fake information aimed at our elections” while ignoring the Chinese propaganda pushing back on the term “Wuhan virus” but the claim that COVID-19 was created by the U.S. Army despite public health officials pointing to the wild-animal market in Wuhan as the source of the outbreak.

He closed the article this way:

There are real threats emanating from this pandemic. We need to focus on getting our response right and save the finger-pointing for what comes after. This is the United States — we will get through this. And for the love of God, wash your hands.
Source: Washington Post

Journos and other lefty Twitter blue-checks lambasted Bolton for sharing the article, some citing leftist “fact-checker” Snopes as a “take that John Bolton!” reply.

One of CNN’s legal analysts, Elie Honig, thought the tweet was hilarious. 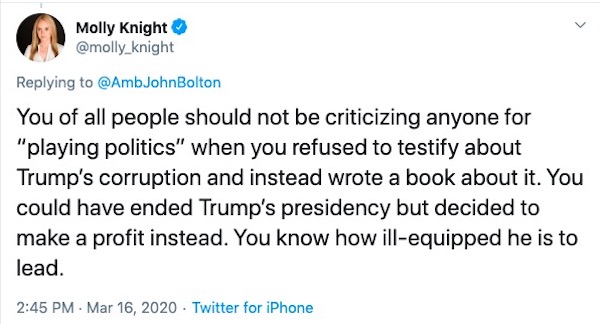 Georgetown Professor, Don Moynihan, had the same sort of reply.

It was a common refrain.

But the most damning was from the voice of She-Ra from the Netflix children’s cartoon. Man, did Bolton tick off what’s her name!

She posted a series of tweets about a minute apart which, presumably, is how long it took for her to formulate her blistering comments.

How will Bolton ever recover from those damning replies from an obscure 31-year old voice actress so desperate for attention that she repeatedly replies to the same tweet?

Clearly, this will be a stain on John Bolton’s legacy for all time.