Not just them, either. It’s a pretty awkward situation for those who presume to fact-check others.

What was it Jesus said about picking the plank out of your own eye before looking at removing the splinter in someone else’s?

Politico got fact checked on Facebook for spreading false information about Trump and Coronavirus pic.twitter.com/uD93zUtBxs

Well, at least Dana is very clear about who he is to his 118K followers: 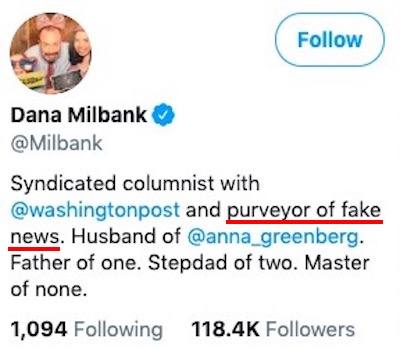 Oooh. That snarky line came back to bite him, didn’t it?

Steve Guest, the rapid response director for the GOP also fact-checked this idea that it’s the Trump administration that is politicizing the Coronavirus.

From the beginning, @GOPChairwoman and @DonaldJTrumpJr have been calling out the Democrats for politicizing coronavirus.

Example: Schumer & Warren have falsely accused the president of having no plan, despite CDC having a 52-page planned response. https://t.co/hyxz8nsfa0

Regarding the media, Politico is publishing false stories about President Trump.

Reminder: President Trump did not call coronavirus a hoax.https://t.co/6VT5E4Ejom

Back to Democrat politicians…

Joe Biden is lying about the Trump administration's response to coronavirus.

No officials were muzzled. https://t.co/HwTIp4L3Ds

Here are Democrat Rep. John Garamendi's threatening remarks about @DonaldJTrumpJr: “He shouldn’t be near… There would be a serious altercation… Don Jr. better not get any place close to me. It would not be a healthy situation.”

No pushback from MSNBC. pic.twitter.com/jW8rdBWJ9T

Another example of Michael Bloomberg with a clear political motivation behind his coronavirus response. pic.twitter.com/YPBAybemeE

The DCCC is now further politicizing coronavirus with an ad campaign to attack the Trump admin and House Republicans. https://t.co/DUbgCBDWTw

Meanwhile, everyone on the left would wish that Trump not ‘politicize’ a national crisis like this.

This is from the same fair-minded people who suggested to rename it #TrumpVirus?

We’ve got a couple of suggestions of our own — beginning with what you can do with that advice.