If you read superhero comics as a kid, you won’t even recognize the genre anymore. It’s no longer just about heroes fighting villains, it’s about social justice and leftwing ideals. The world of comics has become inundated with leftwing “wokescolds” who insist that past comics were sexist and entrenched “white supremacy” in their depictions of the world. They’ve taken it upon themselves to rectify it and create the world that they believe should be represented in comics. It’s a diverse, inclusive world where every identity group is celebrated and given their own hero.

The New Warriors is a prime example of how they are attempting to achieve this goal, and it’s pretty awful.

Daniel Kipplesmith who is the writer for The New Warriors says that the original team has shifted from being the rebels to the authority figures that are mentoring a new group of under 21 heroes. The new team is quite the group…

Snowflake is female but identifies as non-binary using they/them pronouns and can generate individual, crystalized snowflake-shaped shurikens to throw at enemies. Safespace is a “jock” who wears hot pink and can create forcefields, but only to protect someone else. 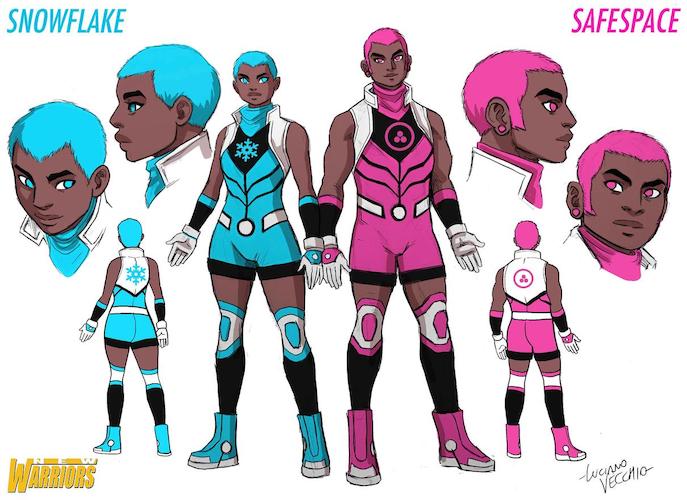 Psychic Twins. “All twins are psychic, but we’re psychic-er.” Snowflake, a cryokinetic, can materialize snowflake-shaped shuriken projectiles for throwing. Safespace can materialize pink forcefields, but he can’t inhabit them himself, the reflex only works if he’s protecting others. They’re hyper aware of modern culture and optics, and they see their Super Heroics as “a post-ironic meditation on using violence to combat bullying.” They’re probably streaming this.

I thought this was a parody at first, but Marvel is introducing two social justice characters named Snowflake and Safespace. Snowflake is non-binary. They are part of Marvel's "The New Warriors." pic.twitter.com/dYr7iW7ZcT

The rest of the team is just as lame.

This is the techy, geeky-cool teen who just can’t ever unplug from the internet. He knows everything because he can instantly Google anything. To put it simply, he’s obnoxious.

A Meme-Obsessed super teen whose brain became connected to the internet after becoming exposed to his grandfather’s “experimental internet gas.” Now he can see augmented reality and real-time maps, and can instantly Google any fact. Does this make him effectively a genius? He sure acts like it does. 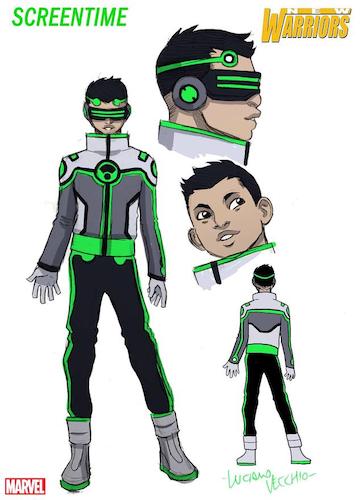 You can’t have teens without the goth outcast with body modification, right? This character’s name isn’t just a play on a blood-type for a hero with a “vampiric” power, it’s also a play on the embracing of the negative attitude expressed by many young people. What could possibly go wrong with this?

A teen “living vampire” exposed to Michael Morbius’s blood as a child in a rogue, but life-saving medical procedure. He still ages like a regular kid, but has all the abilities of Morbius. He’s also obsessed with all the music and attitude of a “classic” long-past decades like the ’90s, and the ’00s. “The world is a vampire…and so am I.” 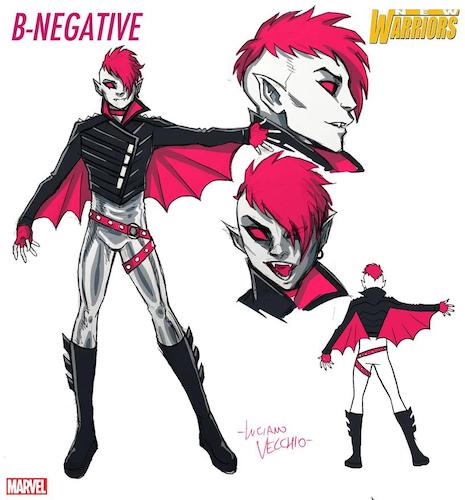 A regular kid scooped up into the world of teenage Super Heroing. Her “magic backpack” is actually a pocket dimension with seemingly infinite space, from which she can pull out useful or random objects—it’s not always under her control. She claims to get her power from god, but “not the god you’re thinking of.” 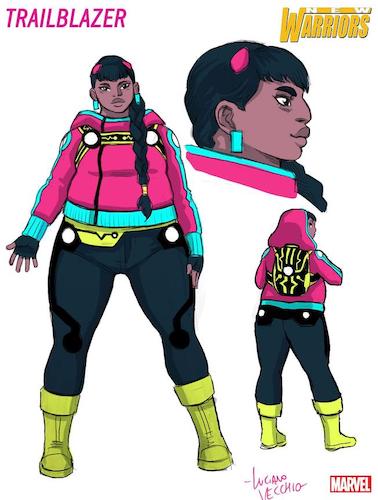 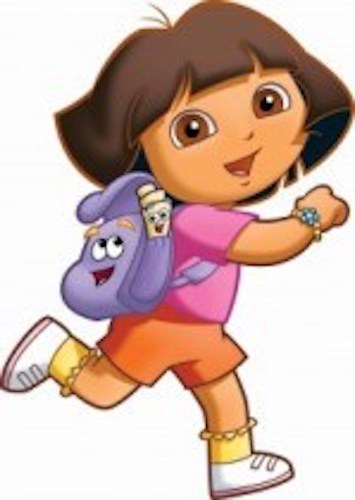 You can meet the full team here:

I showed this to my two teen sons, who (supposedly) are the prime demographic of these comics, and they both had the same thoughts — first, this is absolutely awful, and second, this is what Millennials imagine Gen Z to be like. My boys mock this stuff. So do their friends. This isn’t really a comic for them.

The real target demographic is Obama’s Pajama Boy. This guy should be out on his own, but he still wants mommy and daddy to carry him on their health insurance plan until he’s the ripe old age of 26. 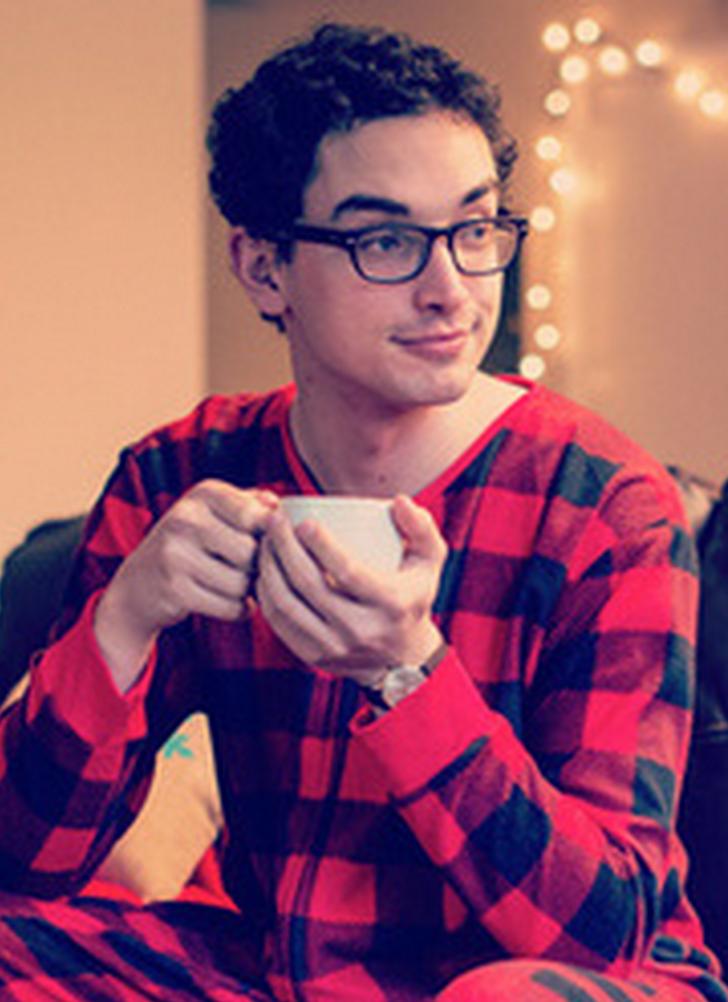 Yes, this is a comic for sad millennials who want to be edgy teens again instead of facing the real world themselves.

These are the people that would vote for Bernie if they didn’t have to leave their mom’s basement to do it, they post YouTube videos about the urgency of the “climate crisis” and the benefits of veganism, and have their pronouns in their Twitter bio. They’re awful, coddled, self-centered bullies who simultaneously know everything but are historically ignorant and oblivious that they could be wrong on any point. The internet is full of them.

And Marvel has decided to immortalize them in comic form.

Fortunately, not all art is that Marvel crap.

Doug has some thoughts on what art should look like. Check out his documentary on Christianity and art here:

Don’t let your kids grow up to think like Kipplesmith and his ilk, get this and read it pronto:

So, You Wanna Know What To Do To Take Back Your Government? Here Ya Go!
April 13th, 2021 Sons of Liberty Media

MEDICAL BIGOTRY: Racist doctors in Boston push to deny healthcare services to White people, based entirely on the color of their skin
April 13th, 2021 DC Clothesline