Imagine hating a group of people so much that you’d rather suffer through and spread a global pandemic than take a vaccine created by scientists who live in a country that you don’t like.

According to his Twitter bio, Roshan Salih is a journalist with Press TV in the U.K. and the Editor of 5Pillars, an independent news site focusing on news for the British Muslim community. He’s also written a book about his career as a Muslim journalist in a variety of places from the U.K. to Qatar and a variety of organizations such as Al Jazeera, Discovery Channel, Press TV, and others. 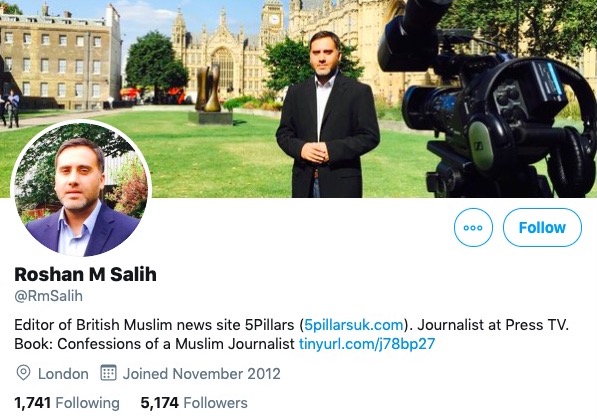 His book, “Confessions of a Muslim Journalist: My life in the mainstream and alternative media,” takes a look at the problems in a divided Muslim community, but also laments that Islamophobia is on the rise and that Muslims have been scapegoated and “otherized” in the media in recent years.

Roshan has had a front seat on much of recent Muslim history, from the rise in Islamophobia and state oppression at home to wars, revolutions and natural disasters abroad. He has also interviewed countless extraordinary people, many of whom ended up dead or in prison…

…By telling his personal career story he takes aim at the British state and media for scapegoating and otherising Muslims in the War on Terror years. But he also reflects on the divisions and inadequacies within the Muslim community itself.

So, you’d think that he’d be careful to not “otherize” anyone else, right?

Salih tweeted out an article by Israeli news organization Haaretz reporting that Israeli researchers are nearly ready to announce that they have developed a vaccine for COVID-19. His tweet read, “I’d rather take my chances with the virus than consume an Israeli vaccine.” 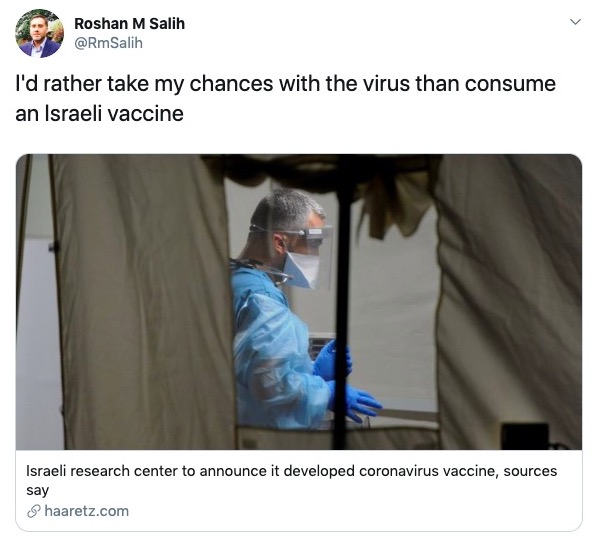 It’s like he took this mocking tweet by Canadian professor, Dr. Gad Saad, and made it real.

Every person who supports BDS should boycott the Evil Juice vaccine. Am I right Noble @IlhanMN? https://t.co/BLj3phjH4u

Imagine my shock to find this guy supports Labour and Corbyn, likes Chris Williamson and is supporting Long-Bailey pic.twitter.com/xdg8UxsRu8 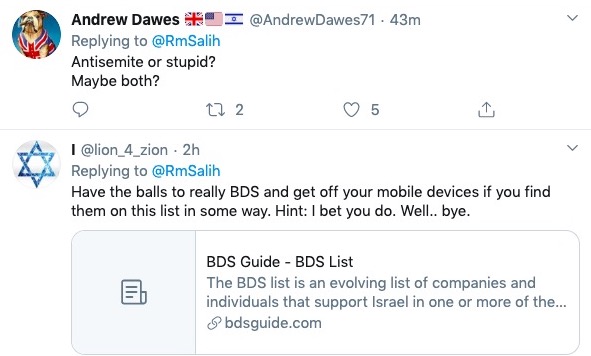 The man has no shame.

He’s doubling-down and claiming that the people that responded to his obvious antisemitism are paid Israeli trolls.

You can’t make this up.

Interesting that my anti Israel tweet earlier seems to have activated a flood of responses mainly from anonymous accounts, many calling for my death. But of course this could not be a coordinated campaign could it?

Seems like this guy would get along with this other guy:

Let’s be clear here… Roshan would rather suffer through the Coronavirus and expose others to it than take a vaccine developed by Israelis.

He then claims that criticism of his blatant antisemitism is also the fault of the Israelis who have a “troll army” that was launched against him.

Roshan is an antisemite.