That awkward moment when Dems have accidentally taken the same side of history as Hitler.

The problem with most ‘woke’ thinking is that in picking ‘winners and losers’, you can never quite anticipate who will really come out on the losing side.

Do you really think they imagined their legislation would have jackhammered artists trying to breathe life into operas written by Jews that had been suppressed by Nazis?

The Intersectional ideology recently embraced by the Left pits one group against another in an endless series of winners and losers, oppressors and oppressed.

They identify one group they consider ‘oppressed’ and create legislation to rebalance the playing field in favor of that put-upon group.

Don’t worry, these injustices will all balance out eventually. It won’t be long before the ‘oppressed’ group is counted as an oppressor by some even MORE ‘disadvantaged’ group.

Just ask women and lesbians who have been beaten by the blunt end of the pool cue by Transgender activists who claim they’re no longer ‘progressive’ enough by the standards of the most recent edition of their PC rulebook. See: ‘TERF‘

The latest victim of this law of unintended consequences is a group trying to rescue Nazi-era Jewish artists from the dustbin of history.

I am the Founder/Executive director of an Opera Company who produces operas by Jewish composers suppressed by the Nazis. I now must close my doors because of AB5. How is this Equal Protection. How is this acceptable in America? You lost my vote! https://t.co/wCmaVqDqfA 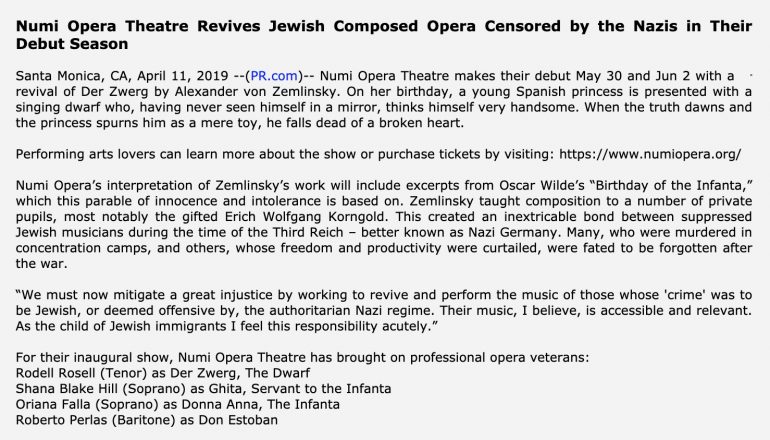 Their story of falling on hard times because of this legislation was one of a series of others featured in the LATimes directly hurt by this ‘anti-gig-economy’ legislation:

AB5, California’s new gig economy law, has left the state’s performing artist community in a state of fear and confusion.

The law is intended to reduce worker misclassification, making it harder for companies to treat workers as independent contractors. It establishes a test to determine whether workers are employees who should receive minimum wage, paid sick days and other benefits.

But the law’s ambiguous language — specifically the use of the phrase “fine artist” without actually defining the term — already had led arts organizations to postpone or cancel productions and has sent others scrambling to raise more money to comply with the law.

I have no idea at this point whether I can or if I can afford to continue. Our small company, as with most California small companies, will die. And with us, the performers who survive off ours and other small companies’ pay will be forced to leave their profession.

Classical performers spend most of their lives honing their craft. They take lessons and coaching to be able to perform.

AB5 will annihilate these small opera companies. We are the stepping stones to bigger companies. Without us, our performers will not be able to be prepared for larger roles and bigger paychecks.

It was a California law designed to punish employers that used contract workers for occasional employment. It was especially hostile to the ‘gig economy’ (Uber and Lyft, for example) for daring to compete against unionized companies.

But the far-reaching and intrusive laws swept up all kinds of other people in their net, too.

Amusingly, some part-time California-based writers got hit with the law they themselves advocated.

It’s almost as though there is some kind of an implicit problem with a system where the government applies heavy-handed top-down demands and expectations on the business world, isn’t it?

If only there was someone out there proposing another way of doing things, without so much red tape…